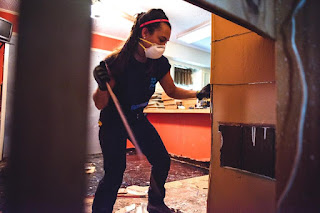 Jillian Goldberg from IsraAID works on a house in Baton Rouge

While much of Baton Rouge appears to be functioning as normal, there is still a lot of work to be done to recover from the catastrophic August flooding.

The flood, which came from up to three feet of rain falling in a three-day period, killed 13, destroyed over 60,000 houses and current estimates put the damage at $8.7 billion. Already, 73,000 homes have been approved for Federal Emergency Management Aid.

In the Jewish community, 42 families have been identified with short-term and long-term needs, according to the Jewish Federation of Greater Baton Rouge. That includes the Federation’s executive director, Ellen Sager, whose home was flooded.

Joanna Sternberg, the Federation’s flood relief manager, said in the Jewish community, “most of the families’ homes have been gutted but are now waiting for FEMA, insurance adjusters, contractors and others.” Meanwhile, “we have been able to offer emergency financial assistance and are processing applications for additional allocations” and the focus is on raising funds to provide as much assistance as possible to affected families.

Jewish Family Service of Greater New Orleans, which had set up a branch in Baton Rouge after Katrina to serve New Orleanians who wound up there after the levees in New Orleans failed, is once again in Baton Rouge. This time, a case manager is working with people in Baton Rouge to assist them with paperwork and their emotions.

A 10-member delegation from IsraAID arrived in Baton Rouge to assist, as it had done 11 years ago following Katrina, its first U.S. deployment. An international humanitarian aid organization founded in 2001, IsraeAID has worked in 39 countries, with long-term activities ongoing in 19 countries.

In Baton Rouge, IsraAID worked with its U.S. partner, Team Rubicon, to help clean out homes. “This cleaning stage is crucial to avoid major health and hygiene issues from contaminated water and open sewage, as well as to build a positive momentum of rehabilitation,” the group said.

One team member was Jillian Goldberg, a Cincinnati native who is an alumna of Tulane. Active in Hillel at Tulane, she majored in Jewish studies and planned to attend medical school. After teaching in Dallas with Teach for America she moved to Israel and has just completed graduate studies in public health, emergency and disaster management at Tel Aviv University.

“IsraAID actually has their headquarters on campus and through multiple connections with them I had the honor to be invited to go on this mission,” she said.

“Upon arriving at a house we are met with mixed emotions, we encounter some of these people at their rock bottom and helping them begin the rebuilding process has been challenging,” Goldberg said. “We do everything in our power to support them in the progression, whether it is sorting belongings, removing debris, or talking to them, the embrace with which we have been met is overwhelming.”

One homeowner remarked, “Their workers were truly a blessing to us. I really don’t have words to express how thankful we are to the team, only God knows.”

Also on the ground is NECHAMA Jewish Response to Disaster, a Minnesota-based group that arrived within a day of the waters receding.

NECHAMA announced that its Baton Rouge deployment has been extended past its original date of Sept. 30, and they will be there through at least Nov. 1 because of unmet needs in the region. For families with flood damage, “each day that passes without receiving assistance means a heavier financial burden and a home that only becomes more overrun with dangerous mold.”

In its first month, NECHAMA has hosted 300 volunteers from around the world, with over 6,000 hours of direct service to 43 families in need. Their goal is to help 100 families by the end of October.

One family they helped was a single mother of a 3-year-old daughter, who had bought her house three weeks before the flood. They had 6 feet of water, destroying all their possessions. NECHAMA volunteers spent two days cleaning out “every inch” of the house.

The group is still looking for volunteers and donations to help their relief efforts.

On Sept. 19, B’nai B’rith International Disaster Relief committee chair Harold Steinberg led a delegation to Baton Rouge to spend two days on cleanup activities. He presented NECHAMA with a $15,000 donation to help purchase another supply truck for the organization.

The Jewish Federation of Greater Houston announced on Sept. 22 that they are donating $50,000 toward Baton Rouge flood relief. Houston’s Jewish community suffered widespread flooding in May 2015 and April 2016.

Joe Kornfeld, flood committee chair for the Houston Federation, told the Jewish Herald-Voice “Too many of us here in Houston have experienced firsthand the havoc floodwaters can bring to lives, homes and livelihoods. No one should have to go through this trauma alone, and we want the Jewish community of Baton Rouge and all of southern Louisiana to know we are here for them, just as they have been there for us in the past.”

The Jewish Federations of North America set up a national fundraiser to cover the estimated $1.2 million needed for needs in the Jewish community.

Several Jewish volunteer groups have come to Baton Rouge, mostly working with NECHAMA. Among the groups were Chabad of the North Shore in Massachusetts, Yeshiva University, Ma’ayanot and New Jersey NCSY, and Temple Sinai in Atlanta, where the husband of their new rabbi is the new rabbi at Beth Shalom in Baton Rouge.

Several New Orleans groups, including AVODAH, Moishe House and JNOLA, have made numerous trips to volunteer in Baton Rouge.

Among the relief efforts, Chabad of Baton Rouge announced an anonymous out-of-town donor was covering half the cost of replacement mezuzahs for Jewish households affected by the flooding, as long as the mezuzahs were up on new or temporary homes by Rosh Hashanah.