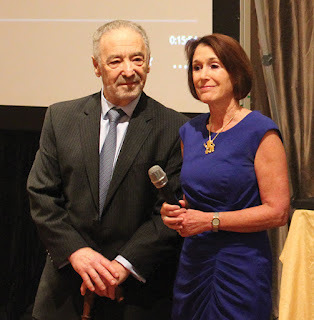 For the Jewish Federation of Greater New Orleans, it was a nice problem to have — the Fete de Federation celebration on Sept. 22 sold out and even had a waiting list.

The 103rd annual meeting was combined with the campaign celebration and awards ceremony, after feedback last summer that indicated a desire to have one large annual event instead of two.

After a social hour at the Audubon Tea Room, elections were held for the Federation and Jewish Endowment Foundation, followed by a seated dinner and the awards presentations.

Federation President Edward Soll said the New Orleans in recent years has become “one of the most dynamic, engaged Jewish communities in North America.”

Rabbi Robert Loewy echoed that in his invocation, saying “New York and Chicago may have more Jews, but we are a Jewish community.”

As the event was held during Elul, he blew the shofar, calling it “the Jewish form of tailgating — the prep before the game.”

Michael Weil, who will be concluding his time as executive director of the New Orleans Federation at next year’s annual meeting, explained the evening’s French theme as an expression of New Orleans’ past and a nod to the French Jewish community. The Federation campaign chairs mission to Israel stopped in France to show solidarity and support in the face of numerous anti-Semitic incidents.

In the coming year, Weil said, the Federation will focus on three pillars: Community building through engaging newcomers and developing new leadership through the Katz Phillips program; Outreach to the greater community, building on relationships with the Archdiocese, Urban League and African-American groups, and reaching out to the Muslim community; and connections with Israel.

New Orleans has “one of the most creative and successful” Partnership 2Gether relationships, with a wide range of activities with Rosh Ha’Ayin. The Federation is giving an additional push to the teen Gift of Israel program, planning a high-tech exchange and is now recruiting for a June 2017 four-track community mega-mission to Israel.

Soll said the mission “is a great opportunity for our community to come together.”

As part of the evening, JEF presented the Jewish Federations of North America Endowment Achievement Award to Anne Lowenburg. JEF Executive Director Saundra Levy called Lowenburg “one of the most understated philanthropists I have ever met… you are a leader in our community in your own quiet and gentle way.”

She noted that Lowenburg’s family was involved in founding congregations in Mobile, Montgomery and Natchez.

In her brief response, Lowenburg simply offered a toast “to those present and those absent.”

In a departure, the Federation annual awards were presented in a video, after which the evening concluded with music and dancing.

Lis Kahn received the Roger Bissinger Memorial Award. She co-chaired the annual campaign in 1998 and was an advisor for the 2007-2009 class of the Lemann-Stern Leadership Development program for rising Federation leaders. A long-time Lion of Judah, she has served as chair of several Federation committees. She has also served on the boards of the National Conference of Christians and Jews, the National Council of Jewish Women and Hadassah, of which she is a life member. Kahn is also a past president of Shir Chadash Conservative Congregation and its Sisterhood.

Michele Gelman received the Herbert J. & Margot Garon Young Leadership Award. A New Orleans native, she moved to Chicago after graduating from Alabama. She returned to New Orleans and became active in YAD, now JNOLA, then was part of the Lemann-Stern class of 2009. She became active at Gates of Prayer, the third generation of her family to do so, and is now the immediate past president.

Gelman has worked on the Jewish Children’s Regional Service Latke with a Twist fundraiser, chaired the Gift of Israel program, and has been part of the effort to revamp the Katz Phillips Leadership Program and to find the next Federation executive director.

Attorney Michael Finkelstein received the Cohen-Jacobs Emerging Leader Award. A native of New Orleans, as a student at Louisiana State University he was a frequent advocate of historic preservation and established an organization to accomplish that mission, in addition to involvement with organizations such as Hillel and Tigers for Israel. He has been honored with the Jeffery M. Lahasky Leadership Award from his fraternity, Sigma Alpha Mu.

Finkelstein has been involved with JNOLA, Youth Run NOLA, and Young Leadership Counsel, and chairs the JNOLA professional networking committee.

Bart began her involvement in New Orleans through Young Judaea, NCSY and BBG. She and husband, Morris, became engaged with Federation soon after they were married, making their first trip to Israel in 1987 on a Lemann-Stern mission. She has served on the boards of Communal Hebrew School, Jewish Family Service, JEF, the Jewish Community Center, the Anti-Defamation League, the National Council of Jewish Women and Federation, among others.

She was a member of the JFNA National Young Leadership Cabinet from 1996 to 2002. The Barts co-chaired the 2011 Federation annual campaign, and the Bart family was the recipient of the JEF Tzedakah Award in 2012. She has also endowed her Lion of Judah.

In early 2016, she helped to spearhead a BBYO reunion of 250 past members of New Orleans chapters dating back to the 1940s, in an effort to raise funds and awareness to help grow the local BBYO chapter.

Usdin serves on the Board of KIPP NOLA, A’s and Aces, the Bureau of Governmental Research, and the Greater New Orleans Foundation. He previously served on the boards of the Audubon Institute, Isidore Newman School and Tulane University Medical Center, and was co-chair of the American Cancer Society’s New Orleans Hope Lodge Capital Campaign.

He is a past board chairman of Trinity Episcopal School and the Tulane University Hospital and Clinic, and a past board member of the New Orleans Bar Association, the New Orleans Children’s Museum, the Jesuit Program for Living and Learning Boys’ Hope Program, ADL and the Louisiana Nature and Science Center.