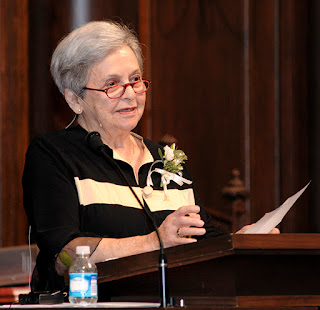 In its 14 years of existence, the Birmingham Holocaust Education Center has never had a past president.

That will change on Dec. 31, as founding president Phyllis Weinstein retires. “It has been 14 years, and at upcoming age 96, I think it is time,” she said.

Also, long-time treasurer Max Herzel announced he will be stepping down.

Rebecca Dobrinski, executive director of BHEC, said “The leadership and commitment to the BHEC that both Phyllis and Max have shown throughout the years since the organization was formed is unparalleled. Phyllis and Max have been friends and mentors to so many and we all love and appreciate them for this.”

Weinstein has been involved in Holocaust education in Alabama since the beginning of formal efforts to commemorate and provide educational opportunities.

The U.S. Holocaust Memorial Council was formed in 1980, and in 1983 Alabama Governor George Wallace began a Holocaust Advisory Committee, which coordinated the first Alabama commemoration in 1984 at the governor’s mansion.

In 1999, the committee became the Alabama Holocaust Commission through an act of the state legislature. Through Weinstein’s efforts, the BHEC was created as a regional branch of the commission in 2002 after the annual commemoration was held in Birmingham that year.

Weinstein also served as chair of the Alabama Holocaust Commission for over a decade. In 2015 she was succeeded by Dan Puckett, who recently wrote a book about Alabama’s Jewish community during World War II and its response to the Holocaust.

The BHEC coordinates a wide range of educational activities. They hold a film and lecture series at libraries every year, large regional teacher training workshops on Holocaust education, and the organization provides scholarships so area teachers can take advanced Holocaust education courses in Washington, Israel and Europe.

The BHEC also tours “From Darkness Into Life,” an art and photography exhibit about the lives and experiences of Holocaust survivors who made Alabama their home after the war. Some of the survivors and their descendants speak at schools and civic groups, coordinated by BHEC.

In 2013, BHEC held its first-ever major fundraiser, now an annual event, and in May, the BHEC dedicated a new art installation in its office in honor of Weinstein’s 95th birthday.

Plans are currently underway for a Holocaust memorial in downtown Birmingham, in the theater district.

A native of Evansville, Ind., she married Leon Weinstein of Birmingham in 1940. After moving around to army bases during the war, they permanently moved to Birmingham after World War II and she first joined the Sisterhood of Temple Beth-El, then Hadassah Birmingham, and served as president of both.

She founded the Southern Region of Women’s League for Conservative Judaism, and the region’s top award has been named for her since 1975. The Southern “Branch in Training” was formed in 1958 as a way of separating from Florida, and at the first conference in 1959, Weinstein became the first president. The branch was officially accepted into WLCJ in 1960.

Weinstein was also president of the Birmingham Jewish Federation and chair of Jewish Community Relations Committee.

Weinstein, Abe Kaplan and Hal Abroms are seen as the founders of Birmingham’s N.E. Miles Jewish Day School, which opened in 1973. In a 2012 tribute, Abroms said “our leadership really was Phyllis. She had the vision, she had the energy… she was the glue who kept us together.”

This year she continued a 44-year tradition of bringing doughnuts for the first day of school.

At the 2012 BHEC tribute, Weinstein said “I have been greatly rewarded throughout the years just knowing that some institutions and organizations that I helped create still exist and are flourishing. The greatest benefit is the wonderful connections I have made with people in these endeavors.”

In many of the endeavors, Weinstein stated it was simply “something that needed to be done.”