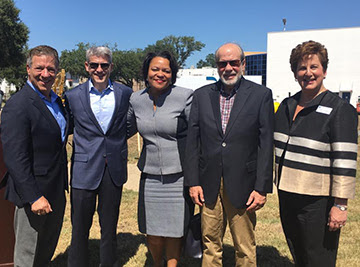 Alabama Chief Supreme Court Justice Roy Moore has been suspended from his position for the remainder of his term, which lasts until 2019, because he was found in defiance of Federal court orders regarding the legalization of same-sex marriage. In 2003, he was removed from the same position for refusing a court order to remove a large Ten Commandments monument from the state judicial building. Here is our Rockower Award-winning editorial from 1996, calling on him to step down when he was a circuit court judge in Etowah County.

Jewish students at the University of Georgia are upset that a homecoming concert was scheduled for Yom Kippur — and then also learned that the concert is a Christian rock band.

Adath Israel in Owensboro, Ky., is down to seven members — but there are two who keep the doors open every Friday, because of the number of curious non-Jews who come to study with them, and they are expecting many non-Jews for High Holy Days services.

A group of senators, led by South Carolina Senator Lindsey Graham, introduced the Taylor Force Act, which would cut off funding to the Palestinian Authority if it continues paying rewards for acts of terrorism. A Texas native, Force was a student at Vanderbilt and was killed on March 8 while on a school trip in Israel.

An interview with Deborah Lipstadt, as “Denial,” the story of Holocaust denier David Irving’s libel suit against her, hits screens in limited release. The national release will be Oct. 21.

Hillel at Mississippi State University is partnering with Krispy Kreme Doughnuts on a fundraiser. Through the end of October, all Hillel members will be selling certificates for a dozen Krispy Kreme original doughnuts for $7. Orders can be placed with any active Hillel member. But one need not be in Starkville — anyone looking to support Hillel can make a $7 donation per certificate, plus $3 for processing and mailing, by going to the Hillel GoFundMe account here. After doing that, send a message to the Hillel Facebook page with the mailing address. The certificates do not expire and may be redeemed at any Krispy Kreme location. Mississippi State Hillel T-shirts are also available for $20 using the same procedures.

Mourning the news about Carnegie Deli closing?  Temple Beth Or in Montgomery is once again selling cheesecakes from Carnegie Deli in New York as a fundraiser. A tradition since 1937, the cheesecakes come in 6-inch and 8-inch sizes, at $25 and $35 respectively. Orders are due by Oct. 28 and may be picked up on Nov. 15 or 16. Gemiluth Chassodim in Alexandria is also selling the cheesecakes at the same prices, for pickup on Dec. 15 or delivery (but only in the Alexandria area) for orders of 10 or more.

For nine months, Maury Shevin explored running for Birmingham City Council. Here’s what he discovered along the way.

Rabbi Barry Leff of Birmingham’s Temple Beth-El is running in the New York Marathon in November, and is raising funds for Beth-El. His marathon page is here.

Torah on Tap with Rabbi Steve Silberman of Ahavas Chesed in Mobile will be on Oct. 6 at 5:30 p.m., at Alchemy Tavern.

The University of Alabama Hillel will have Mr. Chen’s Chinese Shabbat on Sept. 30 at 5:30 p.m. to kick off homecoming weekend.

Chabad at the University of Alabama will have a Subs on the Quad tailgate, Oct. 1 near the corner of Colonial and Capstone Drives.

Birmingham’s Levite Jewish Community Center has been holding a School’s Out camp on secular holidays in the past. By popular demand, the LJCC is now adding a School’s Out camp on the second day of Jewish holidays this month. The LJCC is closed on the first day of two-day holidays, and opens on a Shabbat footing on the second day — such as the first two days of Sukkot, or Shemini Atzeret and Simchat Torah. This month, camp will be available on Oct. 10 for Columbus Day, Oct. 18 for Sukkot and Oct. 25 for Simchat Torah. Upcoming dates include Nov. 11, and Nov. 21 to 23. Camp is $45 per day, $35 for members. There will be packages for winter break and spring break. Camp runs from 9 a.m. to 3:30 p.m., with before care from 7 a.m. and after care to 6 p.m. Registration information is available online here.

With the closing of the outdoor pool for the season at Birmingham’s Levite Jewish Community Center, there will be one last splash on Oct. 9. The Pooch Plunge will enable four-legged members to enjoy the pool from 1 to 3 p.m. Admission is $10 and all proceeds will go toward a planned dog park at the LJCC. There will be vendors, food and music. All dogs must be current on shots and be able to play well with others.

As part of the annual cemetery service between Rosh Hashanah and Yom Kippur, Birmingham’s Temple Beth-El will have a “Blessing of the Bridge.” The 11 a.m. ceremony on Oct. 9 will dedicate the Barbara Touger Memorial Bridge, which goes over the creek that runs down the middle of Beth-El’s Block 40 in Elmwood Cemetery.

The Alliance Francaise presents “Once Upon a Time in Vichy France: From the Sorrow and the Pit,” examining a shift in the way the French think and talk about this period today. The lecture by Colette Windish will be on Oct. 2 at 2 p.m. at the Gautrelet Room, Spring Hill College in Mobile.

JNOLA and PJ Library will have “Safari in the Sukkah” at the Audubon Zoo’s Dominion Room, Oct. 9 from noon to 2 p.m. Families will hear the traditional blessing over the Luluv and Etrog by Rabbi Gabe Greenberg of Beth Israel and there will be face painting, decorating the sukkah, and hearing all about this holiday in the PJ Library reading nook. A kosher lunch will be provided and each family will get to leave with a free Sukkot book from PJ Library. Safari in the Sukkah is sponsored by Jones Walker, LLC.  JNOLA is sponsored by the Oscar J. Tolmas Charitable Trust.

Jewish Community Day School in Metairie is looking to welcome new students for the 2017-18 school year, with two informational Open House events. Visitors can tour the campus, learn about the 21st-century curriculum and meet Head of School Sharon Pollin and the teachers. Open Houses will be Oct. 7 at 9:30 a.m., and Nov. 15 at 6 p.m. To reserve, call (504) 887-4091.

The monthly Shreveport multifaith gathering to pray together will be on Oct. 4 at 6 p.m., under the Texas Street bridge in front of Bon Temps Coffee Bar. Rabbi Jana deBenedetti said last time, at least eight different groups were represented.

Hadassah Baton Rouge is holding a community dialogue on “Water: Local Sources, Global Solutions” on Nov. 13. The panel will include Charles Groat, president and CEO of the Water Institute of the Gulf; Elizabeth ”Boo” Thomas, president and CEO, Center for Planning Excellence; and a guest speaker from the Jewish National Fund. Rabbi Barry Weinstein will moderate. The event will be at 2 p.m. at the Baton Rouge Area Foundation, on the 9th floor of the IBM Building downtown.