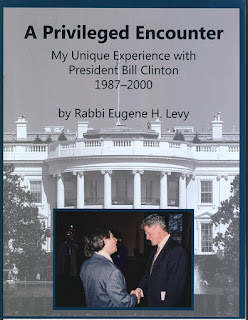 When you’re a rabbi in a relatively-small Jewish community in a state capital, it isn’t unusual to encounter the governor frequently.

If that governor eventually winds up being president, that’s a whole different level of memories.

The book, which is arranged chronologically, “would have been considered a blog” if that sort of thing had existed in those years, Levy said.

He had an idea to write something “and hand it down to our kids so they would have a historical context of this generation.”

For years, Levy had a drawer in his desk with his notes and diary from his different encounters with Clinton. When there was a small fire at B’nai Israel, “I rescued the Torahs and the Clinton material,” he said.

After retirement, he started putting the material together. “It just developed into a memoir,” he said, and “as long as I’m going to make three copies for the kids, might as well make some more.” He gave copies of the privately-published book to his extended family and those who helped him put the book together, especially the Butler Center for Arkansas Studies.

Levy has already done four or five appearances and book signings in Little Rock and Dallas.

His first encounter with Clinton came in late 1987, shortly after Levy moved to Arkansas from Tyler, Tex. Then-Governor Clinton was a speaker at an NAACP board meeting in Little Rock, coinciding with the 30th anniversary of the desegregation of Central High School. Rabbi David Saperstein, director of the Reform movement’s Religious Action Center, was there as an NAACP board member, and was already a close friend of Clinton’s.

They would cross paths many times in the buildup to the 1992 presidential race, with childhood friends of Clinton telling Levy about Clinton’s close ties with the Arkansas Jewish community since childhood.

In 1992, he would write to rabbis across the country before their states’ primaries to “introduce” Clinton to them, especially “skeptical rabbis in the northeast and midwest and west coast.”

Levy would frequently be invited to events in Washington, and the Washington Jewish Week ran a photo of him on the cover, stating he was “Bill Clinton’s rabbi. One of them.” Among the events he attended were the peace treaty signings between Israel and the Palestinians in 1993, and Israel and Jordan in 1994.

The tone of the book is generally positive — various Clinton scandals are mentioned only in passing. “I didn’t want to dwell on them, but I didn’t want to omit them either.”

He unwittingly became part of one scandal — the Lincoln Bedroom controversy, which alleged that overnight stays in the White House were being dangled as an incentive to campaign donors.

When a list of those who stayed in the Lincoln Bedroom was published, his presence on the list was noted in media accounts. In 1996, he was invited to spend the night at the White House — not because he was a donor, he noted. The family of David Ifshin, who was active in the 1992 campaign, was staying in the Lincoln Bedroom that night, as Ifshin had terminal cancer and wanted his family to have the experience of staying in the White House before he died.

As the impeachment process against Clinton gained momentum in 1998, Levy wrote an editorial, “The Zealotry of Impeachment” to “address the hypocrisy.”

He was part of a group of clergy in Little Rock who were “very concerned about what would happen” and noted that many of those pushing for impeachment “didn’t have clean backgrounds.”

The group met with Congressman Asa Hutchinson, who is now governor of Arkansas. “We wanted to make sure if he was going to proceed with this, then it would be done in a just and fair manner,” which did not happen, he said.

After 2000, as Clinton was more involved with the Clinton Foundation, Levy “would see him from time to time” but not particularly often. In 2012, Clinton was the keynote speaker and honoree at a Jewish Federation of Arkansas event, but as Clinton is mostly in New York, “for the most part” they don’t communicate much. He did hear from Clinton after the book was published.

In 2002, on the way back from Israel, Levy was in New York on the six-month anniversary of Sept. 11, and was able to visit with Clinton in his Harlem office.

The final photo in the book is of Levy “and the theoretically two Clinton presidents.”

While he saw Clinton many times, “very rarely” did he see Mrs. Clinton over the years. He has the charm, Levy said, and she is “more of the student.”

While she was a senator from New York, Levy met with her for about 10 minutes in her office while at a conference in Washington. He was accompanied by two rabbinic colleagues who were “amazed I could get an audience with her that quickly.”

The difference between the 1990s and now is that Clinton’s headquarters was in Little Rock, leading to an endless stream of press and political figures — many of them Jewish — in 1992 and 1996, while Mrs. Clinton’s base is New York. “They’ve been gone for a while.”

He chose to concentrate the book just on the period when Clinton was governor and president, and focus on Clinton “the person.”

He notes that “I was lucky to have been in the right place at the right time,” and “any other rabbi in my place would probably have had many of the same experiences and good fortune that I did.”