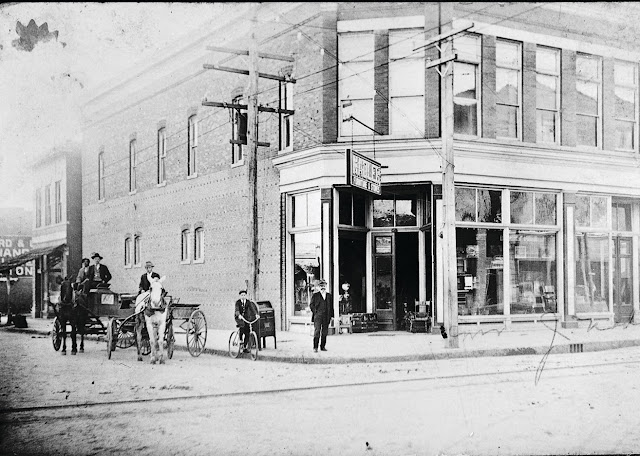 Although it may seem odd that an infant buried in what was the Jewish section at Forrest Cemetery in Gadsden would be featured as having a story to tell in the annual “A Walk Through Time” event, Marguerite Nadler indeed does. And while little Marguerite is close to the graves of the Reichs and the Hagedorns, none of the rest of her family is there. The story is why they felt a need to leave Gadsden, leaving her alone in the cemetery.

Marguerite’s father Jacques was born in 1869 in Fassy, Romania. On an August 1889 voyage aboard the Champagne from Havre, France, he met his future wife Berthe, a French-born Catholic running away from a convent in France with plans to become an au pair in America. Census and passport records give varying dates, but it’s clear that after spending some time in Savannah, the young couple settled in Gadsden. Before the turn of the century, four children were born to them. In all, there were five in quick succession, beginning with Clara in 1894, followed by Marguerite, Lucile, Solomon and Charlotte.

Court records show that Nadler, who went by Jacques, Jacob, Jack, and Jake, went into the furniture business.

In 1903, 10 Jewish families organized a religious school for their children at the Nadler home, at 5th and Cherry Streets. Nadler and Hugo Hecht conducted the first services for what would become Congregation Beth Israel in a room over the old Gadsden National Bank. The growing congregation later met at the Odd Fellows Hall, then in the annex at First Methodist Church.

Between “house cuts” of the weekly card game proceeds, played by city businessmen of all faiths, sandwich sales put on by the Sisterhood, and contributions, members raised enough to break ground for their new synagogue on Chestnut Street in 1922 and enjoy its formal dedication on Feb. 23, 1923.

In those years, Nadler was a busy entrepreneur. Beside the furniture store, in 1915 he established the Nadler Mattress and Bedspring Company, to be the only “comfort” factory in the south. He owned rental property in the area as well.

Gadsden had a reputation as being a fine place for Jews to live: there had been a Jewish president of the Country Club, the downtown businessmen enjoyed a good rapport, and when the Gadsden High School listed outstanding graduates from each year in its yearbook, Lucile Nadler represented the class of 1914, Herman Frank represented the class of 1921 and Sam Bloch the class of 1924. Nadler was one of three Jewish Masonic Lodge officers that laid the cornerstone at the new Beth Israel. The stained glass window installed above the front door read “Love Thy Neighbor as Thyself.”

The Ku Klux Klan was gaining steam, though. In June 1924, the Gadsden Times reported the KKK setting crosses on fire along a route that went on for miles, and on another night that month, they went on parade “in full regalia through three towns.”

The headline of the July 7 paper reads “Nadler Taken from Car by Masked Gang” in which they report that when returning to his home on 5th Street, he was rushed by masked men who had been hiding in the bushes. His son-in-law, Louis Gold, was knocked to the ground when trying to rescue Nadler, and guns were held on Nadler’s daughter and wife, who fainted.

Nadler was stuffed into one of three waiting cars, blindfolded, and taken west of Attalla, where he was “lectured and freed,” having to find his way home in the middle of the night.

The Gadsden Times later editorialized that “The Times Newspaper holds no brief for Mr. Nadler or his acts and knows nothing of the alleged thing which the masked gang considered justification for its intimidating methods. This paper does, however, stand for the right of an individual to pursue his activities under the constitution.”

On July 8, the paper headlined “Arrests Expected in Mob Outrage” and noted that Nadler had since been threatened over the phone with the instruction that if he did not follow orders, “we will get you tonight.”

Soon after, the Tri-city Klan passed a resolution condemning the action against Nadler and even offered a $100 award for apprehending the offenders. Signed by W. W. Penn, Personal Representative Great Titan and notarized, the proclamation notes, “we denounce the act… in the most emphatic and un-mistakable terms, as a Crime, and those who participated in it as Criminals, of a deep and despicable dye… and call upon the Circuit Judges to assemble a Grand Jury to indict and bring to speedy justice each one of said marauders” along with instructions that a copy of this resolution be furnished to each judge and both local newspapers. The Attalla Klan reported to the Times-News that they “heartily endorse the resolutions.”

Gadsden Chamber of Commerce directors and even the Kiwanis Club spoke out, condemning the kidnapping of Nadler. The Rotary Club called Nadler “one of our prominent and most highly respected businessmen” and urged an “anti mask resolution.”

On August 21, it appeared that Nadler had enough and the paper announced “Nadler will Close Out Retail Store” after 30 years in business.

Later that year, one of the suspects indicted by the grand jury attempted suicide. The main case, though, was against John Hopwood, a train conductor.

That trial began on Nov. 19. Things got off to a rocky start when the judge asked potential jurors if they were in secret organizations including the Klan, and several stood.

Although Nadler had refused to give the Times details about the “lecture” he was given the evening of his kidnapping, in court he reveals that it was demanded that he pay $10 for a previous grievance Hopwood had with him, and that he surrender a lease Hopwood had signed. Nadler complied with all the requests.

The sheriff testified that Hopwood had come to him before the night of the event and asked about an idea he had to give Nadler “a good scare.”

Further damning the defendant, it was brought out that Hopwood’s hat, which had his name on the inside, was found in the gutter outside Nadler’s home. Hopwood even went to the police department the day after the incident looking for his hat. Hopwood denied ownership of the hat but refused to try it on when the prosecution asked him to.

On Nov. 25, the hatbox had been given to the jury while they were deliberating, but it was found that in the interim hours while the hatbox had been in possession of the sheriff’s office, the lining and sweatband with Hopwood’s name had been torn out. Although the jury had seen the hat with Hopwood’s name in it already, the judge declared a mistrial owing to tampered evidence.

In a second trial, in which more Klan members were identified, the jury found Hopwood not guilty. Curiously, records show that one of the jury members may have been fellow Beth Israel member Isadore Zemmuray.

In February 1926, Nadler sold his home and moved to Birmingham. While his retail store was closed, he continued to return to Gadsden as a representative for the United Mills lines. He passed away on a visit there in 1950 while staying at Adolph Reich’s Printup Hotel.

On March 25, 1960, 16-year-old Jerry Hunt threw a molotov cocktail into the Gadsden synagogue as it met to celebrate and dedicate the new wing donated by the Zemurray family to provide space for a new kitchen and religious school classrooms. Alvin Lowi and Alan Cohn ran outside to catch the criminal and both were shot with Hunt’s .22 caliber rifle. While Lowi’s wound was to his hand, Cohn’s aorta was hit and he required 22 pints of blood to survive.

The girl who plays Nadler’s daughter Marguerite at Forrest Cemetery dresses as a musician, even though she died as an infant. That’s still appropriate, as two of Nadler’s other daughters went on to be accomplished with their instruments — Lucile became a charter member of the Gadsden Music Club in 1916 and studied in New York with famous pianists Hans Barth and Ernest Hutcheson. Sister Charlotte was well known for her talent on the violin.

Further, when Beth Israel closed in 2011, the building was offered to the city for use in cultural programs, and today it is home to the Etowah Youth Orchestra.

Alan Cohn’s widow, Charlotte, sponsors the role of Marguerite at each year’s performance of “A Walk Through Time” at the cemetery.

This year’s event will be held Oct. 16 from 2 to 5 p.m., with a rain date of Oct. 25. Visitors should park at the Old Gadsden High School, 12th Street between Chestnut and Walnut Street, and ride a trolley to the cemetery, as no cars are allowed inside that day. There will be portrayals of more than 20 people interred there, including a Pulitzer Prize winner, a daredevil high diver, a woman who was buried three times, and little Marguerite.


Special thanks to Charles Centerfit Hart for sharing his extensive research.