Every day is art: The works of Peter Max 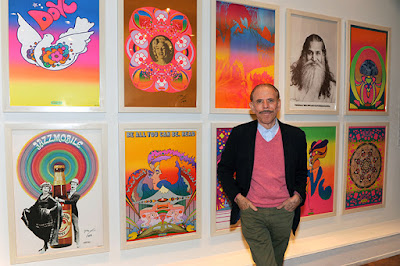 For many artists, a gallery show of over 100 works is a significant percentage of the portfolio. Not so for Peter Max, one of the most iconic artists of the 20th century — compelled to create, he is never at a loss for material.

Max’s show, “A Neo-Retro-Kaleido-spective Exhibition,” will open at the Angela King Gallery in New Orleans on Nov. 11, with a reception from 7 to 9 p.m., which Max will attend. The exhibit will be displayed through December.

With so many iconic images going back to the 1960s, Max is one of the most recognized artists in the country, from posters to postage stamps, commercial products to non-traditional media.

Recent works include portraits of the four judges on NBC’s “The Voice,” 100th anniversary Frank Sinatra posters, the program for the Rock and Roll Hall of Fame induction ceremony and the 41st Beatles Fest poster.

Max was born Peter Max Finkelstein in October 1937 in Berlin. His father, Jacob, had five clothing stores, and his mother, Salla, was a fashion designer.

In 1938, his parents had the “intuition” to flee the Nazi regime and were able to get from France to China, where they were part of the 30,000-member Jewish community taking refuge in a part of Shanghai that became known as Little Vienna.

They lived in a pagoda house, with a Buddhist monastery on one side and a Sikh temple on the other. As a child, each morning he would watch the Buddhist monks painting Chinese characters on vast sheets of rice paper with large bamboo brushes, and at night he would listen to the sung prayers of the Sikhs.

His mother, who volunteered with HIAS, left art supplies on all four porches of the pagoda, to encourage his creativity. When he was three, his parents asked a street artist to teach him how to draw, but the artist instead sent his nine-year-old daughter to teach him.

After he completed a painting, the girl would throw it away and tell him to make another one, to push his skills forward.

“She said only to draw nonsense, not to make real drawings,” to become familiar with the different ways his hand would go. He still will sometimes draw nonsense as an exercise or to warm up.

In 2012 he returned to Shanghai for the first time in 60 years, and has tried to locate her, but did not know her name.

The family spent some time in Tibet, then heard about the coming revolution led by Mao Tse-Tung. Shortly after Israel was established in 1948, a large ship was sent to Shanghai to collect all of the Jews who wanted to leave the Mao regime. The Finkelsteins left everything behind to go to Israel.

He attended school in Haifa and took private lessons from Professor Honik, an Austrian painter who taught him about light, shadow and color. He was particularly entranced by the style of American comic books.

While he was studying art, something else captured his imagination. A visit to an observatory on Mount Carmel made a huge impression and he asked to enroll at an evening astronomy course at the Technion. He started studying astronomy and art simultaneously, and outer space still is an influence in his work. “The universe is a huge hobby of mine,” he said.

When he was 16, the family left Israel and he took classes at the Louvre in Paris for a few months, discovering the world of Picasso and Chagall, then in 1953 they joined other relatives in New York.

He studied at the Art Students League in Manhattan, learning realism from Frank J. Reilly. Max started a graphic design studio in 1961, getting a break when a record company art director saw his work at a place where Max was getting copies of his works made. That led to his award-winning cover for an album by blues pianist Meade Lux Lewis and many more commissions.

He started working on collage to capture the counterculture of the 1960s, then saw the introduction of four-color web presses opening up new possibilities. His posters exploded in popularity, and he became the artist who most successfully captured the era.

By 1969, he was on the cover of Life magazine with an eight-page spread inside, was a guest on “The Tonight Show.” Before long, his work was licensed by 72 companies, “from General Electric clocks to Burlington Mills socks.” In three years, those products had sales of over $1 billion.

In 1976, Max started a tradition of painting the Statue of Liberty every year on July 4. Lee Iacocca, who headed the 1980s effort to restore the statue, saw the series and used the images as part of the campaign.

He has done portraits of Israel’s flag and was the official artist of the 2013 Celebrate Israel parade in New York. He also did a series called “36 Rabins” in memory of the former Israeli prime minister.

Max’s ventures into the sports world include being the official artist of the 2006 U.S. Olympic Team at the Winter Olympics in Turin, Italy, and the official artist for five Super Bowls, World Cup USA, The U.S. Open, The Indy 500, The NYC Marathon and The Kentucky Derby. He also painted a car for Dale Earnhardt in 2000, the year he also was official artist for the “Subway Series,” the World Series between the New York Yankees and Mets.

After the Sept. 11 terror attack in 2001, he did portraits of each of the 356 firefighters who died in New York, and presented them to surviving family members at a ceremony.

His relationship with New Orleans began in 1988 when he was invited to paint a gift for Ronald Reagan in his final year of office. The young Republicans group presented Max’s painting of the U.S. flag with a heart to Reagan during the 1988 Republican National Convention in New Orleans.

His relationship with the Angela King Gallery started that year, and he has continued to visit New Orleans every year. “His presence in New Orleans is one that will be remembered by all who had the good fortune to enjoy,” King said.

In New Orleans, Max has attended Super Bowls, Jazz Fest and major conventions where he was invited to speak, including as the keynote speaker for the International Digital Design Conference. He designed the 1994 Jazz Fest poster and has done several paintings of places around New Orleans.

The year after Katrina he painted and gave four portraits to Heroes of the Storm including Mitch Landrieu, animal rescuer Missy Jackson and journalist Chris Rose.

His art has adorned the exterior of a Continental Airlines Boeing 777 and a Norwegian Cruise liner, and he has done portraits of six U.S. presidents.
After all these years, Max paints “a few” works every day. “The best time in the world is when I’m in the studio. I love it,” he said.

While he has many commissions, about 80 percent of the time “I just paint. Abstracts, compositions… hundreds of subjects, constantly.”

Because of all his studio time, he also enjoys going to art openings around the world and interacting with fans of his work. He does as many as 140 gallery openings per year.