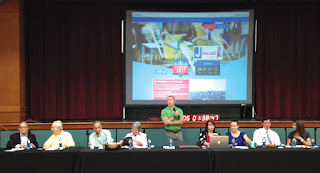 Volunteer, housing and athlete recruitment are priorities for 2017 Games in Birmingham

On Sept. 28, there was a large gathering of those organizing the 2017 JCC Maccabi Games in Birmingham to announce numerous details of the huge athletic competition, including event venues and guests for the opening ceremony.

The JCC Maccabi Games is part of the Jewish Community Centers Association, and three communities across North America host the games each summer. Thousands of Jewish teens from ages 13 to 16 participate each year in an Olympic-style sporting event. It is regarded as the second-largest organized sports program for Jewish teens in the world, and Birmingham is the second-smallest Jewish community to host the games since they were founded in Memphis in 1982.

In addition to Birmingham, the 2017 Maccabi Games will be held in the Albany, N.Y. area and at the Alper JCC in Miami. An estimated 700 teens will compete in Birmingham.

The Birmingham Maccabi Games will be held July 30 to Aug. 4, 2017, with Layne Held and Bruce Sokol as the volunteer co-chairs.

The leadership meeting included 50 committee heads and organizers, and honorary chairs Mike Slive, former commissioner of the Southeastern Conference, and General Charles Krulak, retired U.S. Marines Commandant and former president of Birmingham-Southern College. A countdown clock kept winding on the edge of the auditorium stage during the meeting.

The Games will open with a public ceremony on July 30 at the University of Alabama at Birmingham’s Bartow Arena. The opening ceremony includes a parade of delegations, much like the Olympics opening ceremony, and a torch lighting.

Auburn Basketball Coach Bruce Pearl and Olympic Gold Medalist Jennifer Chandler-Stevenson will be among the speakers at the opening ceremony, along with Slive and Krulak. Renowned Hazzan Alberto Mizrahi will perform, and Robert Levin, the voice of the University of Alabama Million Dollar Band, will emcee.

There will also be a tribute to the 11 Israeli athletes who were murdered at the 1972 Olympics in Munich. One of the athletes, David Berger, was a graduate of Tulane.

Anna Harwood noted Chandler-Stevenson, who competed as a child at the LJCC, medaled in diving at the 1976 Olympics, the first summer games after the 1972 terror attack.

The LJCC and Chabad of Alabama will serve as hubs for the games, with athletes being picked up and dropped off at those locations each day. Maccabi Central and Medical Central will be at the LJCC, and the LJCC will be the site for lunch each day and “hang time” for those not competing.

Hang time venues will include socializing, charging stations and events like yoga, drum circles, discussions of Jewish topics and small Tzedakah projects.
For medical needs, the Games will partner with the sports medicine team at Children’s Hospital.

David Nomberg announced that the competition venues will be the LJCC, Altamont School, Birmingham-Southern College, UAB and the Birmingham Crossplex.

The Crossplex is a relatively new world-class facility that has a six lane oval hydraulic track and eight 60-meter lanes for sprint and hurdle events. The facility also features a 50-meter indoor Olympic swimming pool.

The hydraulic track features a Mondotrack surface and is one of only four in the United States and one of six world-wide.

Nomberg said this is likely the first time a Maccabi Games has been able to hold an indoor track-and-field meet. The three host cities don’t have an identical slate of competitions, and Birmingham will be the only host for track-and-field, which attracts a significant number of competitors.

Every year, the Games also include a social action component. Because Tisha B’Av falls on Aug. 1, that will be the day for JCC Cares, and athletic competitions will be pushed to the late afternoon and evening.

Visits to the Birmingham Civil Rights Institute and the 16th Street Baptist Church are planned, and delegations will bring school supplies that will be assembled into backpacks for students in Birmingham city schools. Additional projects are in the planning stages.

On Aug. 2, there will be an evening street party at the McWane Center. Plans include blocking off 19th Street for entertainment, and providing access to the Food Hall at the Pizitz Building.

The closing ceremony on Aug. 3 will be at the LJCC field, with entertainment and the passing of the torch to the 2018 venue. Red Mountain Entertainment, which organizes concerts and festivals in the region, is coordinating entertainment for the evenings.

Dan Tourtellotte, who led the LJCC’s first Maccabi delegation in 1988, said roughly 1,000 volunteers will be needed to help the Games run properly. Job descriptions are being developed in numerous categories, and outreach is planned to nearby churches whose members also want to help.

Volunteers must be at least 17 years old for daytime shifts, 21 for evening events. “Sports commissioners” are being recruited to run the competitions, with a need for those experienced in scorekeeping, judging, timekeeping and so forth.

Volunteers are needed to handle registration, greet delegations at the airport, assist with crowd control and serve food at the HUB, work with the transportation system, assist greeters in coordinating with the transportation, traffic control at the LJCC and other venues, work the opening ceremonies and assist with office duties in Maccabi Central.

There are also volunteer opportunities for VIP reception, orientation and departure assistants, coordinating hospitality, staffing informational areas, safety and security, and stocking ice and water at venues for coaches and athletes. Medical volunteers will be needed at each venue, and there will be numerous public relations and reporting duties to be filled.

At the meeting, marketing chair Stephanie Salvago showed the “sizzle reel” being used to promote the games to potential sponsors.

Layne Held said they have already secured over $250,000 in cash and in-kind sponsors toward a goal of $600,000, from individual donors and the corporate community. “The city of Birmingham is benefiting from this event and we feel it is a compelling story,” he said.

Over 3,000 people will be coming to Birmingham when considering athletes, coaches, spectators and support staff.

All participating athletes must identify as Jewish and have home hospitality in a household where at least one adult is Jewish. Maureen Halpern said the housing committee is recruiting at all LJCC events and will be reaching out to the community soon. There are already 150 host families, at least 300 are needed.

Locally, recruitment is already underway for the host team, and there are hopes to field a team of 75 athletes. In a host city, athletes must be between the ages of 12 and 16 as of July 31, 2017; visiting delegations start at age 13. Local athletes are required to house two or more visiting athletes.

The host delegation may be called Team Alabama, as organizers want to reach out to teens in Deep South communities that do not have a JCC, such as the rest of Alabama and Mississippi.

Sam Dubrinsky said they are also planning outreach to the Birmingham Sister City Commission to see about recruiting Jewish teens from Birmingham’s sister cities around the world. In addition to Rosh Ha’Ayin, Israel, Birmingham has sister cities in Japan, China, Italy, Ukraine, the Czech Republic and the United Kingdom, among others.

The Embassy Suites will be the hotel for delegation heads and coaches, with other hotels available for parents and other chaperones. Venues and hotels will be stocked with local snacks.

For security reasons, anyone connected to the games, from athletes to volunteers, will need to have a credential with them at all times, and security is being coordinated with multiple local agencies.

Spencer Lynch said the Games are “going to be a phenomenal event next year.”

Those interested in competing, hosting athletes, volunteering or sponsoring the Games can express interest here.