Holocaust memorial garden to be dedicated at Jackson’s Beth Israel 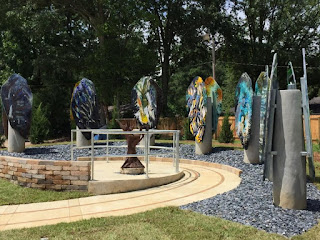 Jackson’s Beth Israel announced that Nov. 13 will be the dedication of the Gus Waterman Herrman Holocaust Memorial Garden.

The large art installation was designed and constructed by Pearl River Glass Studio, under the direction of Andrew Young, will Bill Heimer serving as project manager and Beth Israel board trustee Peter Zapletal coordinating the project.

“We are all deeply moved to have such a significant and poignant art structure and memorial garden at our place of worship for all to experience,” said Beth Israel President Michele Schipper.

The installation consists of seven sets of large glass structures on concrete columns surrounding a raised pulpit. The abstract sculptures represent seven “key points of the Holocaust,” Young said: “The Ghetto,” “A Temple Menorah,” “Kristallnacht,” “Book Burning,” “Disappearing Village,” “Chai” and “a Striped Cloth” illustrating events or symbols of the Holocaust. “The abstract images allow each viewer the freedom to experience the Holocaust Memorial for themselves,” said Young.

The serial number tattoo of the late Gilbert Metz, Mississippi’s only concentration camp survivor, is depicted in the glass panels.

The pulpit is reached by a spiral walkway with a railroad motif, alluding to the trains that transported Jews to the concentration camps.

Ground was broken on the memorial on June 6, 2015, by Beth Israel then-president Howard Katz, and Rabbi Ted Riter, who was interim rabbi for Beth Israel.

Herrman was a businessman and philanthropist in Lexington, Miss., and was involved in the now-defunct Temple Beth-El there. He served in World War II, and moved by the atrocities made a bequest to Beth Israel for Holocaust remembrance observances and programs.

Herrman is also known for making the largest single gift to Hebrew Union College. Between his and his brother’s bequests, HUC received over $10 million.

Other Beth Israel members also made contributions toward the garden.

The 4 p.m. dedication service and unveiling will include state and local dignitaries, Mississippi clergy, members of Beth Israel and invited guests. Music will be provided by the Clinton High School Choir along with the Beth Israel Shirim Choir, both under the direction of Carol Joy Sparkman.

“We hope Jews and non-Jews alike, will visit the Gus Waterman Herrman Holocaust Memorial Garden to reflect and to contemplate this dark period in the history of the world, and that those who visit will be inspired to advocate for world peace now and for future generations,” Schipper said.

Other Holocaust memorials currently being developed include one in downtown Birmingham’s theater district, and the Unknown Child memorial project planned for the grounds of the Circle G Ranch in Horn Lake, Miss., a site once owned by Elvis Presley.