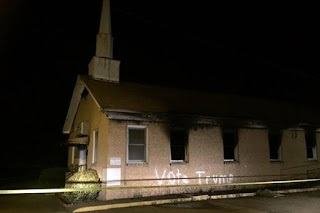 The Jewish community in Greenville and beyond reacted with shock and horror at the burning of a predominantly black church on Nov. 1, and the discovery of “Vote Trump” spray painted on the side of the building.

The fire at the 111-year-old Hopewell Missionary Baptist Church is being investigated as a hate crime, and Greenville’s police chief referred to it as a form of voter intimidation.

Greenville Mayor Errick Simmons said local, state and federal authorities have been contacted “and we will not rest until the culprit is found and prosecuted to the fullest extent of the law.”

A “person of interest” has been identified, but there have been no arrests.

The South-Central region of the Anti-Defamation League, which includes Mississippi, expressed “deep concern” about the torching.

Regional Director Allison Padilla-Goodman said it is “shocking and horrifying to see such a crime in 2016,” calling it a “hate crime and an act of voter intimidation.”

Mississippi Governor Phil Bryant issued a statement saying “anyone who burns a place of worship will answer to almighty God for this crime against people of faith. But they should also answer to man’s law.”

Three representatives of the Greenville Jewish community attended a vigil the evening of Nov. 2. Rabbi Debra Kassoff of Jackson, who serves Greenville’s sole synagogue, the 40-family Hebrew Union Congregation, said they are looking at ways to reach out further.

Kassoff sent a prayer to be read at the vigil, starting with a reading from Lamentations after the destruction of Jerusalem in 586 B.C.E. “There is no justice in the loss and suffering of our friends at Hopewell Missionary Baptist Church tonight,” she said, but the “hateful act against peaceful, God-loving citizens, represents the punishment that our whole society brings down upon itself when we allow contempt and anger to guide our words, our thoughts, our actions.”

She added, “Our people have known persecution and destruction, and so all the more we reach out to you in love and solidarity… As you rebuild, you will not be alone.”

The church ‘s sanctuary was heavily damaged, along with the kitchen and pastor’s study. Hopewell Pastor Caroline Hudson said they will rebuild on the same site.

A GoFundMe campaign was launched with a $10,000 goal and had already received $125,000 in the first 13 hours. J. Blair Reeves Jr., who started the campaign on behalf of Hopewell Bishop Clarence Green, said “Responses have been pouring in from all over the world, and they’re truly extraordinary. Christians, Muslims, Jews, Hindus, atheists and many more, from all over the United States and many other countries.”