From Shanghai to Greenwood: Ilse Goldberg’s escape from Germany 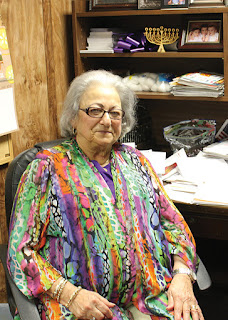 Ilse Goldberg, owner of the historic Goldberg’s in Greenwood, has been such a presence in the Mississippi Delta town for so long, many people assume she has been there forever.

A few years ago, that changed as she talked publicly for the first time about her experiences fleeing the Nazis after Kristallnacht and spending several years as part of the Jewish refugee community in Shanghai, China.

After that address at Greenwood’s First Presbyterian Church, she received several “beautiful” notes from people in the community. “They didn’t even know I wasn’t born here in this city,” she said. “It was news to them.”

For a long time, “I couldn’t talk about it,” she said, because she did not want to relive it. At the church, “all my grandchildren were there, and that was the first time they ever heard my story.”

This past May, there was a Day of Remembrance at the Museum of the Mississippi Delta, where she told her story. The interfaith event, led by Rachel Myers of the Goldring/Woldenberg Institute of Southern Jewish Life, also paid tribute to American soldiers who liberated the concentration camps.

Goldberg was born in Reichenbach, Germany, the only child of Erna and Richard Markus. Her family had been in the scrap metal business for generations.

When she was 9, they moved to Breslau to be closer to her grandparents. Then the Nazi restrictions started against Jews in the region, including a requirement of wearing the yellow star.

In late 1938, her parents were instructed to catalog their belongings, especially things like the china, silver and furniture, and turn the list in. On Nov. 9, the Nazis came to their home and loaded up everything, then drove off. “They robbed us of everything we owned,” she said.

After the war, her mother had a thick stack of papers listing everything the Nazis had taken in 1938. A few years ago, Goldberg decided to shred it. “What good does it do?” she figured. “Just heartache.” But now that she has been working on paperwork for the Conference on Jewish Material Claims Against Germany, “I’m sorry I did it.”

The morning after the Nazis hauled everything off, she awoke to a city of smoke, with the synagogue and her school on fire, Jewish businesses demolished. It was Kristallnacht.

The next morning, Nazi soldiers came to arrest her father. On the way out, he instructed her mother to bring him some papers, which he took with him.

He spent five weeks at Buchenwald, until an announcement went out for all men who fought for Germany in World War I and had their discharge papers with them to step aside. “Those were the papers my dad had with him,” she said. “He received the Iron Cross and many honor medals” and had shrapnel in his head from a war injury.

Goldberg said her father was lucky to have those papers; a friend at the camp had used his for personal hygiene the day before and wound up in the gas chambers of Auschwitz.

After her father was released, he had to check in with the Gestapo daily until he could get out of Germany. There was no way to get a visa to the United States, so “we had no choice but to accept the Shanghai solution” as no visa was required.

Her grandfather arranged passage to Italy, where they boarded a ship to Shanghai. Two weeks later they arrived, stripped of their citizenship. “It was a shocking experience,” she said. “We were loaded on trucks and taken to a refugee camp” with primitive, unsanitary conditions. They slept in a hall with 30 to 40 others. 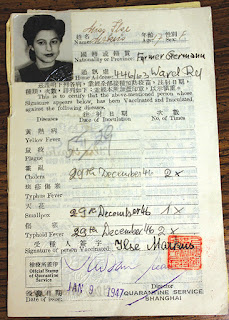 After a few months, her father found work and they were able to move to a better place, though it had only cold water, no flush toilets and no gas, just electricity that was too expensive to use often.

She was able to enroll in the American School in Shanghai and was permitted to leave the ghetto only for that.

A cousin in Memphis that they had never met started helping them financially, and her parents opened a small grocery store in part of their living quarters. After six months, her parents contracted typhus and were taken to a hospital. At age 13 she was alone and working to keep the store open for the five weeks until her parents were able to return.

She finished school at age 16 and was hired by the American Joint Distribution Committee to teach homeless and underprivileged children.

After eight years in Shanghai, they received word in 1947 that they could go to the United States, sponsored by their cousin. She was more than ready to go.

After two weeks at sea, they had to spend two more weeks just outside San Francisco because of a case of cholera on board. Finally, they docked, and upon seeing the Golden Gate Bridge “we deeply felt freedom in our hearts after so many years of hardship.”

For the next four days, they traveled by train to Memphis and finally met their cousin, then went immediately to the employment office. Her father worked in the metal business, her mother did alterations and she started working for Eagle Lion Films.

In Memphis, she met Greenwood native Ervin Goldberg. A friend from Mississippi, Jay Piltz, was visiting and brought Ervin with him.

After she was out late on a date with Ervin, her parents told her that she wouldn’t go out with him again, “but they soon loved him more than they loved me,” she laughed.

In Greenwood, there was a prominent Chinese family that was pleasantly surprised when they learned she was from Shanghai. They would come by and speak Chinese with her.

Many in Greenwood were surprised at how much she knew about the different small towns in the Delta, but she explains that while working for the film distributor, those were places where the films went.

Goldberg’s was founded in 1921 by Morris Goldberg, having been a shoemaker in Eastern Europe. He and his oldest son, Harry, came to the United States through Galveston and made their way to the Delta, stopping in Lexington and Tchula.

Harry learned English and wound up valedictorian at Greenwood High School, after which he went into the family business. His four siblings also came to Greenwood, and his two brothers joined the store.

Ervin died in 1989, at which point they closed the shoe repair aspect of the business, as they couldn’t find skilled people.

In the 1970s, they noticed that people weren’t buying expensive dress shoes. They were the first in Mississippi to start offering a new brand called Adidas, shifting their emphasis to athletic shoes. They have continued to stay on top of the trends, along with an emphasis on customer service to keep going in the Internet age.

With almost a century of history, there are many fourth- and fifth-generation customers. The Manning family, football royalty in the state, were all fitted at Goldberg’s.

The Goldbergs are a significant proportion of Greenwood’s Ahavath Rayim, the last historically Orthodox congregation in the state. For many years, they would have kosher meat shipped in by the truckload from Chicago; wider availability in Memphis makes it more convenient today.

After High Holiday services and many other times during the year, they host meals in their “holy garage” at their home. Often, student groups touring Jewish sites in Mississippi will visit the synagogue and garage.

Three years ago, a Hillel group visited, and one of the students mentioned she had a grandfather who had also been in Shanghai. That night, Goldberg checked her memory book from that time, and the next day showed that student a message her grandfather had written in the book, all those decades ago.