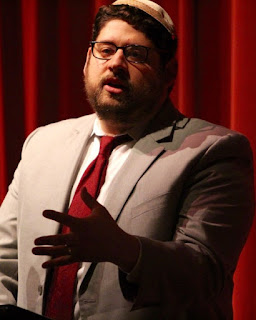 A time of transition for Birmingham’s Knesseth Israel continues with the announcement today that Rabbi Eytan Yammer is taking a new position in Massachusetts.

In a letter sent to the congregation this morning, Yammer said he had been offered the rabbinic position at B’nai Torah in Longmeadow, Mass., just south of Springfield, and as that congregation has been without a rabbi for several months, they want him to start as soon as possible.

Yammer said he will stay at Knesseth Israel through the end of the secular year, but told his new congregation that he will want to be sure that Knesseth Israel’s needs are accounted for before he leaves, even if it takes a couple of extra weeks.

While a student at Yeshivat Chovevei Torah, Yammer visited Birmingham to lead community Seders in 2009 and 2010, and he said the Passover experience showed him that Knesseth Israel would become their home. He became rabbi of the Orthodox congregation in 2010.

Yammer alluded to that in his letter, saying the congregation’s finances meant his salary could not be sustained for 2017-18. “We’re sad to go, but have to do what is necessary” for the family, he said.

The Yammers will have familiar faces nearby — Michelle Konigsburg is the head of Heritage School, the community Jewish Day School in nearby Springfield, and her husband, Rabbi Randall Konigsburg, is at Beth Shalom B’nai Israel in Manchester, Conn. The Konigsburgs moved there this summer after being at Birmingham’s Temple Beth-El.

Yammer served in the Israel Defense Forces for two years as the second Intifada began in 2000. A trained emergency medical technician, he was in New Jersey on Sept. 11, 2001, and went to Manhattan to help survivors of the World Trade Center attacks for a week.

Last year, the Forward named him one of America’s Most Inspiring Rabbis, and the Birmingham Jewish Federation presented him with the Joanie Plous Bayer Young Leadership Award.

He also established an eruv in the neighborhood around Knesseth Israel.

In the years he has been in Birmingham, “we’ve seen the shul flourish in ways I wouldn’t have thought possible.”

It has been a challenging time for the congregation, which has struggled financially in recent years. Its new building was dedicated in 2007, but in 2012 there was still an outstanding balance of $3 million on the building, and it was put on the market.

In 2013, it was purchased by Jimmy Filler and Brenda and Fred Friedman, and renamed the Friedman Center for Jewish Life. While the congregation was able to remain in the building, it was also used for other community purposes, including the CJFS Cares program.

This summer, Friedman said it was time to look into selling the building, causing the congregation to start contemplating alternate plans.

One plan being considered was using the rabbi’s house, which the congregation owns free and clear, and finding different living space nearby for the rabbi and his family.

Ehrenberg said the congregation is still “in a holding pattern” as nothing has ben announced regarding a possible sale.

Yammer said the congregation today is “much stronger than it has been in a long time, even with the challenges facing it,” and the congregation’s budget will be self-sufficient for the first time in many years.

He added that it is good to feel bad about leaving. “It means you’ve made connections, that you feel good here.”

Knesseth Israel is working to find a Torah reader for the rest of the year, and is talking to Yeshivat Chovevei Torah to find a rabbinic successor.

“We continue to love KI and all the members of the extended KI family,” Yammer said. “We may be moving to the frozen north but we will feel nothing but warmth in our hearts for KI and despite our distance we will always feel a closeness with all of you.”