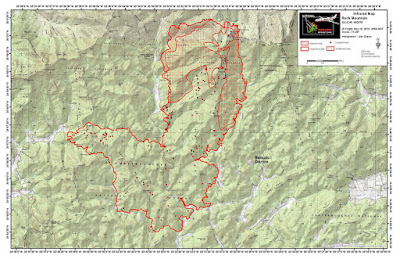 U.S. Forest Service map of the Rock Mountain fire, as of Nov. 20

(Updated Nov. 22) With the ongoing severe drought, there has been a high risk of wildfires, and one is raging not far from Camp Ramah Darom, the Conservative movement’s summer camp in north Georgia.

The camp has opened its doors to over 400 firefighters, housing and feeding them while they battle what is being called the Rock Mountain wildfire.

Fred Levick, CEO of Ramah Darom, said “we expect to have guests for at least a few weeks.” Staff and volunteers are preparing Thanksgiving dinner for the firefighters on Nov. 24.

Many have asked how they can help, so the camp set up a North Georgia Wildfire fund at this link, donors should pull down the fund list to find the wildfire fund option.

The Rock Mountain fire started on Nov. 9 on Tallulah River Road, “several miles” from camp, and it is believed the fire was set intentionally. As of mid-day on Nov. 22, the fire had burned over 14,000 acres and was 30 percent contained. A nearby Timber Ridge fire across the North Carolina line has burned almost 900 acres.

According to the Federal interagency website, the estimated date of total containment is Dec. 15.

On Nov. 14, a center of operations was set up in Clayton for the firefighters who traveled to the area. The camp reached out to the operations center and offered their facilities. Firefighters started arriving as a women’s retreat was concluding at the camp.

A pre-evacuation notice was issued by the U.S. Forest Service for Patterson Gap north of camp, and all roads on Betty’s Creek Road. Residents were urged to blow leaves away from their homes, remove dead limbs in yard, clean out gutters and cut all limbs touching their homes.

Levick said the fire is primarily a ground fire, spreading through fallen leaves and not reaching the tops of the trees. 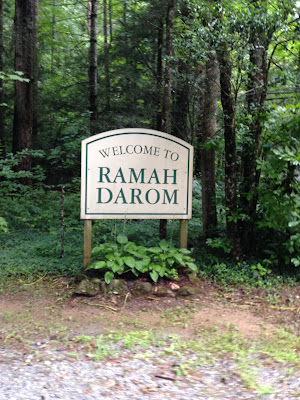 Levick said “We have been in regular contact with our Fire Department leadership and keeping a close eye on the situation.” While authorities do not consider the camp to be at risk, “the situation is very fluid.”

There is a haze of smoke in the air at the camp, and some ash residue is beginning to accumulate. The mid-eastern containment line is 1.3 miles west of the camp.

The firefighters’ priorities are structure protection and perimeter control.

There is no rain in the forecast, but a cold front came through with unwanted strong winds over the weekend.