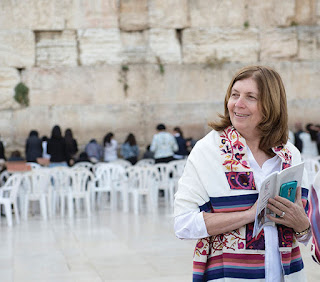 Anat Hoffman, who has been a central figure in the fight for Jewish pluralism in Israel, will speak at Gates of Prayer in Metairie on Dec. 1.

Hoffman chairs Women of the Wall, which holds a prayer service at the Western Wall at the start of each Hebrew month in an attempt “to attain social and legal recognition of our right, as women, to wear prayer shawls, pray, and read from the Torah, collectively and aloud, at the Western Wall.” Some of the services have been met with forcible resistance from Orthodox authorities at the site.

This is a long-standing battle. The group’s website starts its timeline with the first International Jewish Feminist Conference in 1988, where an attempt to have a women’s service at the Wall was met with “verbal and physical assaults.”

In 1989, the Ministry of Religion and the Ministry of Justice declared that “any religious ceremony at a holy place that is not in accordance with the custom of the holy site and which offends the sensitivities of the worshipers at the place” is prohibited.

In 2002, Hoffman became executive director of the Israel Religious Action Center, which works to promote Jewish pluralism, tolerance, and equality and to combat racism, corruption and religious coercion.

Previously, she was on the Jerusalem city council for 14 years, pushing for adequate municipal services for the Arab residents of Jerusalem, and fighting the Orthodox bloc on the council to ensure they do not dictate lifestyle choices for the secular population.

Hoffman was born in Jerusalem and in her teens was an Israeli swimming champion. After army service, she received a degree in psychology at the University of California in Los Angeles and then pursued graduate studies at Bar Ilan University.

As executive director, she works to secure unequivocal state recognition, funding, and equal status for Reform and Conservative rabbis, synagogues and institutions.

She works to oppose gender segregation and the exclusion of women from the public sphere, protect the rights of all converts to move to Israel and enjoy equal rights, and to establish freedom of choice in marriage and equal rights in divorce in Israel.

The group also combats racist incitement, particularly by public and religious figures who use Jewish sources to try and bolster intolerant positions.

The 7:30 p.m. program is open to the community, and is being sponsored by Joanne Fried, lifetime board member of the Women of Reform Judaism, Gates of Prayer and the Jewish Federation of Greater New Orleans. Co-sponsors are Touro Synagogue, Temple Sinai, Shir Chadash Conservative Congregation, Shir Chadash Sisterhood, Northshore Jewish Congregation, Hadassah, National Council of Jewish Women and Tulane Hillel.