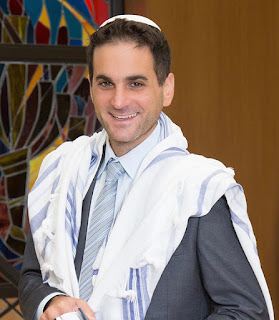 Beth Shalom Synagogue in Baton Rouge will officially welcome its new rabbi, Natan Trief, on Dec. 9, during an installation service followed by an Oneg, as well as a learning and celebration-filled Shabbat.

Trief is a recent graduate of Hebrew Union College-Jewish Institute of Religion in New York, as is his wife, Rabbi Samantha Shabman. Trief joined Beth Shalom on Aug. 1 following a rather unusual search process. Since both rabbis were searching for positions at the same time, they knew they would face some potentially hard choices.

When Rabbis Trief and Shabman visited Beth Shalom in March 2016, it was clear that Trief was was Beth Shalom’s pick. However, Shabman was offered a rabbinical position in Atlanta that was too good for her to pass up.

After much thought and consideration, the congregation and its new rabbi found a way to make it work. Trief is now Beth Shalom’s full-time rabbi who is “on the ground” in Baton Rouge part-time. He travels from Atlanta every other week to lead services, teach classes and see to the needs of the congregation. He is available by phone, email and video conference the rest of the time remotely from Atlanta, and comes to Baton Rouge as needed for lifecycle events.

Trief began serving the community immediately after the July shooting deaths of Alton Sterling and three law enforcement officers and right before the devastating flood of 2016. “These events have been a powerful experience that showed me the grit and determination of my new synagogue, and helped to reinforce my decision to join the larger Baton Rouge community,” said Trief.

“Upon his arrival to Baton Rouge, Rabbi Natan truly hit the ground running,” said Mark Hausmann, Beth Shalom president. “He provided leadership and comfort in the face of the devastating flood as many of our members were significantly affected. Not only did he serve in his pastoral role, but he rolled up his sleeves and personally assisted in remediating homes.”

A New Jersey native, Trief graduated from Dartmouth College with a double major in Spanish and history. He then spent 10 years exploring the world, from the corporate boardrooms of PepsiCo to the hills, valleys and seas of Israel and the Mongolian desert.

In 2006, he moved to Israel, where he lived on a kibbutz and learned Hebrew before he enlisted in the Israel Defense Forces as a combat soldier specializing in search and rescue. Toward the end of his service, while baking challah and teaching Shabbat blessings to his crew-mates on a sailboat in the middle of the Atlantic Ocean, Trief confirmed his sneaking suspicions: the rabbinate was the right place for him.

He met Shabman during their first year of rabbinical school on the Jerusalem campus.

Trief’s family will visit Baton Rouge for the installation, and Nick May will accompany the 7 p.m. Shabbat service on Dec. 9. Hausmann will install Trief, and there will be remarks by Wendy Zierler, the Sigmund Falk Professor of Modern Jewish Literature and Feminist Studies at HUC-JIR.

On Dec. 10, Zierler will lead Torah study at 8:30 a.m., followed by breakfast, a 10 a.m. service and a luncheon, which will also feature a lecture and discussion led by Zierler.