Women of the Wall’s Anat Hoffman urges U.S. Jews to speak out on pluralism in Israel 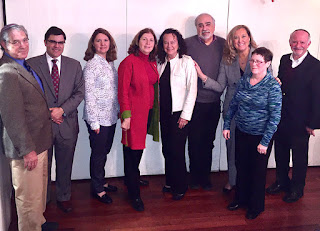 For years, Anat Hoffman has been in the trenches fighting for pluralism and minority rights in Israel, and she wants Jews outside of Israel to jump in.

That was her charge to the New Orleans Jewish community on Dec. 1 at Gates of Prayer in an event co-hosted by a wide range of Jewish groups. She also spoke at Tulane Hillel on Nov. 30.

Hoffman chairs Women of the Wall, which holds a prayer service at the Western Wall in Jerusalem at the start of each Hebrew month in an attempt to establish access for women to pray as they choose at the Wall. Rosh Chodesh, the first day of the Hebrew month, is regarded as a women’s holiday.

Hoffman’s New Orleans visit was on Rosh Chodesh, but was keenly aware of what had transpired that morning in Jerusalem. As the women entered the Western Wall plaza, they were searched for contraband — “to see that they didn’t bring a Torah scroll.”

The Wall is divided into a section for men and a section for women, and women have to adhere to Orthodox restrictions on public prayer and singing. There also can’t be any services that mix men and women. Hoffman said “you can’t turn the holiest site of the Jewish people into an ultra-Orthodox synagogue.”

In 1988, the first International Jewish Feminist Conference held a service at the Wall, interrupted by verbal and physical attacks. The hotel had refused to lend the group a folding table, and “I was a local with a folding table,” Hoffman said. “I had no idea it would be the beginning of a 28-year struggle” that continues. Women of the Wall was formed after that conference.

Women of the Wall members have been arrested for wearing a tallit at the Wall. In October 2012, during a Hadassah 100th anniversary convention, she was asked to lead delegates in prayer at the Wall. She met them at the wall, put on tallit and started saying shehecheyanu, and was arrested on the spot, in front of the Hadassah women.

A 2013 court ruling found that the women are not disturbing public order by praying there. The next month, thousands of ultra-Orthodox protestors greeted the monthly demonstration.

Natan Sharansky was asked by Prime Minister Benjamin Netanyahu in 2012 to examine the issue after Hoffman’s arrest, and come up with a solution.

In January 2016, Israel’s government approved a compromise that would expand a space at Robinson’s Arch to about 10,000 square feet, with 31 feet of Wall frontage. The Orthodox section is 21,500 square feet along 200 feet of the Wall.

The agreement was negotiated among Women of the Wall, the Reform and Conservative movements, Jewish Agency for Israel, the Western Wall’s Orthodox leadership and the Israeli government.

Hoffman said Israel needs strong leadership on pluralism. “Netanyahu can and should implement” the agreement, Hoffman said. It’s a fallacy that the Orthodox parties would pull out of the coalition over this, a common excuse for not implementing the compromise.

A greater push from abroad is needed, and she figures the Supreme Court will soon weigh in on the delay in implementation.

Last month, the group brought in 14 Torah scrolls to the women’s section, with the presidents of Reform and Conservative movements among those taking part.

Reciting “it is a Tree of Life to them who hold fast to it,” Hoffman commented “You don’t know what holding it is until there is some police officer trying to yank it out of your arms.”

Now, some Orthodox legislators are proposing the criminalization of women wearing a tallit or tefillin, or doing Torah reading at the Wall, punishable by up to six months in jail. Hoffman said she plans to go to the women’s prison in Israel and talk to the rabbi there about holding services, including Torah reading.

It’s not entirely an Orthodox-secular divide, though. “The bravest feminists in Israel are Orthodox women,” she admired. Her center has a hotline for Orthodox women and she fights on their behalf as well. Those women, she said, still have to live in the communities where these views are controversial.

“Orthodox women who at first were reluctant to talk to us are now celebrating Reform Judaism,” she said.

Establishing an egalitarian, pluralistic option at the Western Wall will show Israelis that there is more than one way to do Judaism, beyond an Orthodox establishment that is seen as monopolistic and too entangled in the government. “They are intoxicated by power and they are abusing it.”

Of the 9 million visitors per year, she thinks a majority will be more interested in visiting the pluralistic section. “Do I belong in the Orthodox plaza or the egalitarian plaza? And may the best plaza win.”

In 2002, Hoffman became executive director of the Israel Religious Action Center, which works to promote Jewish pluralism, tolerance, and equality and to combat racism, corruption and religious coercion.

The Wall is only one of many pluralism issues, Hoffman said, but it’s the big one. Recently, her group worked against the sex-segregation on buses. They finally won by arguing that since bus service is heavily subsidized by the government, Israel is in essence subsidizing gender segregation, which is illegal.

They are suing El Al on behalf of an 82-year-old woman from Jerusalem, who is a Holocaust survivor.

It took many years to get some level of recognition for the Reform and Conservative movements in Israel, but even that is at a basic level. While the Orthodox groups get a great deal of funding from the state, subsidies to the Reform movement are part of the “sports and culture” budget.

For the center, pluralism isn’t just about Jews — they work on hate crimes against Muslims, and civil rights issues. She noted Israel has the highest minority percentage of Muslims in the Western world. “We can’t exercise in the sport of hating Islam,” she said, adding that Israeli police need to do a better job of bringing Jews who perpetrate anti-Muslim hate crimes to justice.

She noted that Muslim doctors in Israel save vastly more Jewish lives than terrorists have taken, and that is the side of Israeli life that needs to be seen. She urged, “bring one of those doctors here. Bring one of the innovators and get to know them… they more than anyone can be witnesses that Jews and Arabs can live in peace.”

Adapting the security mantra of “if you see something, say something,” she said “I don’t know why it doesn’t apply to our relationship with Israel.” Diaspora Jews have a responsibility to speak out, “from a place of love and great commitment.”

The rift “is a threat to the strategic interests of Israel in North America,” Hoffman said. If not for the moral, spiritual and Jewish reasons to implement the agreement, Netanyahu should implement it for the future of Israel and the largest Jewish community in the world, the U.S.

She wants U.S. Jews to feel they have a “license to speak up when you hear that Israel is wandering away from its own vision.” Even though American Jews don’t pay taxes in Israel or send their children to the military, “you have a say on Jewish values. Israel is too important to be left to the Israelis.”

Jews worldwide celebrate Israel’s triumphs, and are affected “when we screw up. If 100 women were searched this morning for fear they are going to read Torah, it reflects on all of us.”

She concluded, “it’s time to stop being quiet. You’re doing Israel no favors by being quiet.”