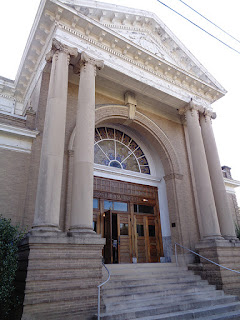 In conjunction with the Southern Jewish Historical Society’s conference in Natchez, there was an evening reception on Nov. 5 with all of the proceeds going toward the preservation of B’nai Israel.

Efforts to preserve the historic building got a boost just after the conference with an announcement that B’nai Israel member and Natchez businessman Jerry Krouse has committed $100,000 to help spearhead the preservation campaign.

According to the Institute of Southern Jewish Life in Jackson, the campaign “is intended to pay for some immediate maintenance needs to preserve the building, and also to plan for long-term care and use of the building.”

The building is still used by the remaining handful of Jews in Natchez; when it is no longer used as a synagogue, the building “will function as a cultural and meeting facility, accessible to all, with an elevator, 350-seat sanctuary, museum exhibits, and special programming to preserve and interpret the important legacy of the Natchez Jewish community.”

According to promotional materials for the campaign, no other venue available to the public in Natchez can seat over 300 people, and “the acoustics are desirable for dynamic speakers and presentations,” and its location makes it a desirable venue for such programs.

The Institute, which operates the Museum of the Southern Jewish Experience, will acquire the building and operate the museum spaces.

The campaign’s initial effort has been to raise $300,000 to establish an operational endowment. The entire project’s scope, though, will be roughly $3 million to maintain it “as a perpetual gathering place for people of all faiths.”

A condition analysis was recently done and estimated the total restoration cost at over $1.5 million. The building does not meet current exit and fire codes, or the Americans with Disabilities Act. An elevator will need to be installed in the building.

The old air conditioning system and electrical system both need to be replaced, as well as the plastic covers over the stained glass windows.

The roof is believed to be in good condition but needs recoating, and the masonry needs mortar repairs to stop leaks.

“We are so grateful to Jerry Krouse for his incredible gift,” said Rachel Myers, the ISJL Director of Museum Projects. “The Natchez synagogue is a building and a story worthy of saving and sharing. Raising these funds will be a challenge, but with lead donors like Mr. Krouse stepping forward, we know we can meet this challenge head-on.”