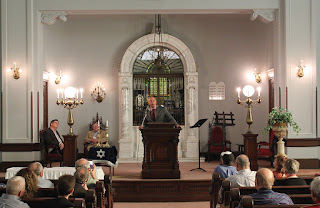 As Rabbi Jeremy Simons prepared to lead the Nov. 4 Shabbat service at B’nai Israel in Natchez, an unprecedented problem — at least, for him — came to mind: Would there be enough prayer books?

“It’s a question I’ve never had to contemplate before,” he said. As traveling rabbi for the Jackson-based Institute of Southern Jewish Life, Simons routinely does weekend visits to small communities in the South where the number of books far exceeds the remaining Jewish population, and Natchez had been the first pulpit where he led a Shabbat service after being ordained as a rabbi in 2014.

While Natchez’s Jewish population is now in the single digits, this weekend would fill B’nai Israel for services and presentations, as the Southern Jewish Historical Society was having its annual conference there.

Thanks to a quick shipment from Memphis, there were plenty of books, and a rare large crowd to use them.

When planning began for the conference in Natchez, about 80 were expected to sign up, and 90 would be considered a great success. Over 140 registered.

For SJHS, this was by far the smallest community to host the annual conference. Recent conferences have been in Nashville and Birmingham; next year’s will be in Cincinnati.

The conference was also part of the year-long tricentennial celebration of Natchez’s founding, and drew Natchez Mayor Darryl Grennell to welcome the conference “on behalf of the citizens of Natchez and Adams County.”

The weekend began with a bus tour from Jackson to Vicksburg and Port Gibson. Along with Natchez, these were “northern colonies of the Jewish community of New Orleans,” Rockoff said.

In Vicksburg, Richard Marcus said Anshe Chesed still has services every Friday night, with 12 to 15 in attendance, “of which the majority are not Jewish, but they like to come to the services.”

Marcus, who is 87, said there are 11 people left in Vicksburg’s Jewish community, and they are in discussions with Friends of Vicksburg National Military Park about an agreement that would give the property to the national park, in exchange for allowing the congregation to use part of the building as long as they can, and for perpetual care of the Jewish cemetery, which is surrounded by the military park and contains numerous park markers.

Lunch was held at the historic B’nai B’rith Literary Club, which had been an office building before being restored to become an event space.

At Port Gibson, Doug Lum spoke to the group about how his family had purchased the Gemiluth Chassed building to keep it from being torn down. The landmark Moorish-style building was constructed in 1892 and officially closed in 1986 when there were two remaining Jews in Port Gibson, though Lum said he does not remember it being actively used when he was growing up there.

Sam Gruber, an expert in synagogue architecture, considers Gemiluth Chassed and the Frank Lloyd Wright-designed Beth Sholom in Elkins Park, Pa., as two of the best-known synagogue buildings in the country, though they “couldn’t be more different” and represent “two different aspects of the American Jewish experience.”

Jay Lehman, president of B’nai Israel, welcomed the conference to Natchez, talking about how the community is “only about 10 of us, and only about four active.”

Teri Tillman gave an overview of Natchez Jewish history. Though not Jewish, there is “no greater expert on the Jews of Natchez.” She also led a tour of the Natchez Jewish cemetery on Nov. 5.

She noted that this year’s Angels on the Bluff cemetery tour will include a portrayal of Leon Cahn, who immigrated from France. Cahn ran into B’nai Israel when it caught fire in 1903 and rescued the Torahs. He will be portrayed by Doug Broome, senior pastor at First Baptist Church.

During the Nov. 4 service, Robin Amer did a stage version of her podcast, “Growing Up with the Last Jews of Natchez,” which she wrote for the Southern Foodways Alliance’s Gravy series.

Part of the story included a recollection of the 1994 Natchez Jewish Homecoming, where her grandmother insisted that a reception be done Natchez-style, regardless of how many national Jewish dignitaries and rabbis would be coming. And to her, Natchez-style meant including items like ham biscuits.

After weeks of back-and-forth, an appeal to Southern hospitality and the desire to not make a guest feel uncomfortable seemed to change her mind — but when the reception took place, the ham biscuits were on the table.

But any joking about the 1994 battle of wills known as the “Ham Biscuit Incident” boomeranged at lunch on Nov. 5, much to the consternation of the weekend’s organizers. Instead of a plated lunch of fried chicken and green beans at Carriage House, the fried chicken was on a buffet line — accompanied by catfish and barbecue shrimp, lima beans flavored with ham pieces, and grillades and grits.

At the lunch, Stephen Whitfield gave a presentation on Jewish activism against the Ku Klux Klan, noting that the first incarnation of the Klan was largely indifferent to the Jews, but in the 20th century that changed.

Many communities, he noted, have stories of the local Jewish merchant who had sold the Klansmen their sheets or could identify them in parades because he’d sold them their shoes.

There were many presentations on different aspects of Southern Jewish history on Nov. 5 and 6 at B’nai Israel.

Gruber spoke of the elaborate Masonic ceremonies that often marked the cornerstone laying for Southern synagogues, including Temple Emanu-El in Birmingham. Such occasions were major events for cities in the region, with a wide range of civic leadership participating.

Kay Goldman continued the theme of non-Jewish involvement with the Jewish community and spoke of her research into massive Purim balls held throughout Texas in the 19th century. Those balls, which were by invitation, were often on the scale of Mardi Gras balls and involved a large proportion of non-Jews.

Anton Heike spoke of how yellow fever affected Southern Jewish communities, a theme that was mentioned several times during the weekend, as Vicksburg and Natchez had their episodes.

Michael Cohen did a presentation on another major Mississippi River port that had a bustling Jewish presence, Bayou Sara, Louisiana. No longer on the map, it was a major center of Jewish mercantile life until the river that made it possible also wiped it away, through a series of floods after the Civil War until the 1920s.

Its “twin town” at the top of the hill, St. Francisville, lost prominence as Bayou Sara disappeared, and the Jewish congregation there went defunct in the 1920s.

The New Orleans Jewish Orphans Home was the focus of Marlene Trestman’s presentation. This year, she was honored by the home’s successor agency, Jewish Children’s Regional Service, after she did a biography of the pioneering lawyer Bessie Margolin, who had been a resident of the home.

Trestman, who had been assisted by JCRS, spoke of going through the records of the 1,623 children who went through the home over nine decades starting after the 1853 yellow fever outbreak.

She is examining the history of those children to see how many more “Bessies” are out there, “who went on to great fame and success,” and how the home shaped them and their sense of how to be a mensch.

Sally Wolff King discussed Jewish life in Mississippi, Louisiana and Arkansas through the lens of the Wolff family.

Joshua Furman presented a retrospective on National Brotherhood Week and how the National Conference of Christians and Jews event was observed in the South during the tumultuous civil rights struggles.

In the Deep South, the focus was more on promoting interfaith understanding and tolerance among white congregations, with pulpit swaps and exhibits. Furman said the organization was “intentionally slow to acknowledge race relations” because that would threaten the work they were accomplishing.

The week, which was observed in proximity to Lincoln’s birthday, died out in the 1960s. To conclude, Furman played Tom Lehrer’s satire of the week, which concluded “it’s only for a week so have no fear, be grateful that it doesn’t last all year.”

At the business meeting, Troy University Professor Dan Puckett became president of the society. Puckett is author of “In the Shadow of Hitler: Alabama Jews, the Second World War, and the Holocaust” and currently chairs the Alabama Holocaust Commission.

Next year’s conference will be hosted in Cincinnati by the American Jewish Archives, which is planning a workshop on establishing and maintaining synagogue archives, following the conference.