The Jewish History of Natchez 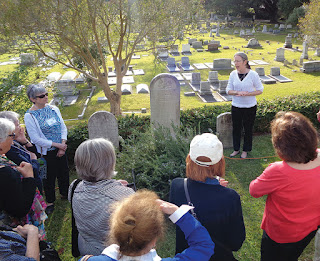 All year, Natchez has been celebrating the 300th anniversary of the “Jewel of the Mississippi,” and as home of the oldest existing Jewish congregation in Mississippi, it has a great deal of Jewish history as well.

In 1716, the French built a wooden fort on the bluff overlooking the Mississippi and named it Fort Rosalie. In 1729, the local Indian tribe, the Natchez, attacked the fort, killing over 200 and capturing women, children and slaves. A war ensued, which ended in the 1760s. France ceded the area to Britain, and Natchez became part of British West Florida.

In 1779, the Spanish took Natchez, and the governor soon developed the plan for the current downtown layout.

The first cotton gin arrived in 1795, soon followed by the withdrawal of Spain as the region is ceded to the United States. The territory of Mississippi, which included Alabama, had its capital in Natchez.

An 1800 treaty with the Indians led to the Natchez Trace being developed, and by 1811 cotton was being shipped along the Mississippi. In 1817, Mississippi became the 20th state.

The best-known Jewish residents from that time were the Monsanto brothers, who came to Natchez in 1785 from Spain via New Orleans. In the 1790s, peddler Henry Jacobs was the first Jew in the area to become an American citizen.

Natchez historian Teri Tillman said there was one Jewish family in Natchez in 1830, and four Jewish heads of household in 1840.

In the 1840s, many Jewish immigrants arrived from Alsace-Lorraine and Bavaria. They opened stores in the rough “Under the Hill” area.

In 1843 a “Hevrah Kedusha” was formed with the purchase of a portion of the city cemetery.

By 1850 there were 25 Jewish families, but 26 members of the community died in the 1853 yellow fever epidemic.

The congregation tried to start again in 1861, but the war intervened.

Many in the Natchez Jewish community fought for the Confederacy, including “Little Mississippi Major” Simon Mayer, who was also known as “too short to shoot.”

The only Natchez casualty during the war was a 7-year-old Jewish girl, Rosalie Beekman, who was hit by shrapnel when the U.S.S. Essex responded to an attack by the locals. Her last words were “Papa, I’m killed.”

For many in Natchez Jews, having the only Civil War casualty be from the Jewish community was a source of honor, reflecting how they were integrated into the Natchez community.

Land was purchased in 1867 on Commerce and Washington, though construction on a building would not begin until 1870, with Rabbi Isaac Mayer Wise, founder of the Reform movement, laying the cornerstone.

B’nai Israel had started out Orthodox, but after the war, new arrivals questioned the old ways. Samuel Ullman, who later became an important figure in Birmingham, started a religious school at the request of women in the community. Ullman disliked how the Orthodox practices excluded women and children, risking that the children would group up “heathens.”

The congregation became one of the charter members of the Reform movement in 1873, following a dispute over the congregation’s ideological direction, manifested by where to place the pulpit. Dedicated in 1872, the congregation’s building burned in 1903 due to faulty wiring. The current building was erected on the same site in 1905, and the congregation met at Jefferson Street United Methodist Church in the interim.

Eastern European Jews arrived starting in the 1890s, but unlike many communities, they did not set up an Orthodox congregation, instead joining B’nai Israel.

In 1908 the boll weevil’s rampage against the cotton crop started reducing the Jewish community’s numbers, and the move from steamboats to railroads also contributed to Natchez’ decline as an influential port.

The boll weevil hurt the Jewish merchants, factors and brokers as much as it hurt the farmers, Tillman pointed out.

The Jewish community had peaked at 141 members in 1906. By 1938 there were 90 members. Young people “felt there was not much of a future for them in Natchez,” Tillman said.

The last full-time rabbi, Arthur Liebowitz, died in 1976, and the community had dwindled to fewer than 30 families. Today, there are fewer than 10 Jews in Natchez.

In 1991, B’nai Israel deeded its building to the Museum of the Southern Jewish Experience, now the Goldring/Woldenberg Institute of Southern Jewish Life. A Natchez Jewish Homecoming was held in 1994, and the congregation figured prominently in the MSJE’s 1998 exhibit, “From Alsace to America.”

The building holds occasional services and serves as a satellite museum for ISJL, with an exhibit on Natchez Jewish history.

The house next door was home to several of the congregation’s rabbis.

Many of the successful businessmen built impressive homes. In general, Natchez was a wealthy city, home to more millionaires in 1860 than any other place in the U.S.

Many Natchez landmarks have Jewish connections. The Bailey House Bed and Breakfast is the former residence of Adolph Jacobs, who served as B’nai Israel president and city alderman.

The Burn Bed and Breakfast is the former residence of Saul Laub, who was mayor of Natchez in the 1930s.

The original Eola Hotel, currently under renovation, was built in 1927 for the Levy family.

The Neoclassical Guest House, which now houses the Eola Hotel, was owned by the Ullman family, before they moved to Birmingham in 1884. The historic antebellum building later housed the Elks Club, which had many Jewish members.

One of the most famous landmarks, Monmouth Plantation, was purchased by Lani and Ron Riches in 1978. They undertook a massive restoration after decades of neglect, and had it declared a National Historic Landmark. The 30-room historic inn changed ownership in 2012.

The well-known Glen Auburn was home to the Simon Moses family in the 1890s.

Henry Frank arrived as a supplier with the Union Army, stayed after the war and became one of Natchez’s wealthiest citizens. He once resided in Myrtle Terrace.