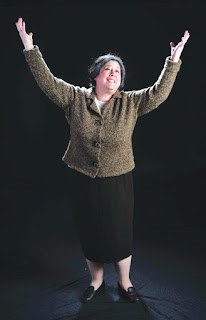 “Golda’s Balcony,” the longest-running one-woman show in Broadway history, is coming to Birmingham next month.

Temple Emanu-El is hosting the production on Jan. 28.

The story of Golda Meir, Israel’s fourth prime minister, the show opens during her most challenging time — the Yom Kippur War, when Egypt and Syria launched a surprise attack against Israel in 1973 while she was prime minister.

The show then diverges to Meir’s impoverished beginnings in Russia, childhood in Milwaukee, her fractured relationship with husband Morris who she insisted follow her to pre-state Palestine. There, she became a national leader.

The play’s title comes from the nickname for an observation area in the Dimona nuclear facility. “Golda’s Balcony” was playwright William Gibson’s second attempt at Meir’s story. Author of “The Miracle Worker,” Gibson wrote “Golda” in 1977 with a much larger cast. It was not a success.

In 2003, the current version debuted and ran for almost 500 performances with Tovah Feldshuh in the title role. In 2006, there was a film version starring Valerie Harper.

Nashville resident Jay Kholos, who worked on such 1960s shows as “The Dick Van Dyke Show,” “The Red Skelton Show” and “The Jack Benny Show,” saw the Broadway production and wanted to license it so it could be done in smaller communities, synagogues and JCCs.

He chose Francine Berk, who he had cast in his own show, “A Stoop on Orchard Street,” to play Meir. A Brooklyn native, Berk started performing at age 9, as Dorothy in “The Wizard of Oz.”

After her father’s untimely death, she started songwriting, soon fronting a New York-based country band. She and her husband moved to Nashville, where record producer Ray Doggett called her “the Bette Midler of Country,” but Doggett died suddenly, and her country career never took off.

In addition to “Golda’s Balcony,” she is touring as part of “Old Jews Telling Jokes.” She has also played Daisy Werthan in “Driving Miss Daisy” and Golde in “Fiddler on the Roof,” in addition to numerous other roles.

In 2014, Le Petit Theatre in New Orleans had a run of “Golda’s Balcony.” Executive Director Cassie Steck Worley said “Golda’s Balcony is one of the most beautiful scripts ever written and is a compelling story about an extraordinary woman who, through intelligence and passion, rose to become one of the most important women in the world. It is 90 minutes of history that everyone should see.”

Tickets to the Jan. 28 show are $45, and are available at Emanu-El or online at ourtemple.org. Patron levels range from $250 to $5,000. A sell-out is expected, and there will not be a will-call table at the event.

A dessert reception and meet and greet with Berk will follow.

All proceeds will benefit Emanu-El, as the production and reception have been underwritten by individual funds in the Temple Emanu-El Grafman Endowment.