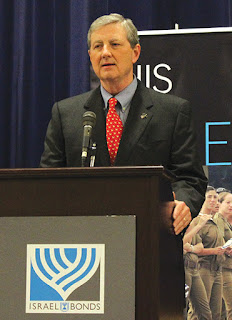 Republicans from the South are almost uniformly supportive of Israel, and the three new faces heading to Congress from Louisiana are no different in that regard.

Louisiana Treasurer John Kennedy defeated Foster Campbell, 61 percent to 39 percent, in the U.S. Senate runoff on Dec. 10. Close to two dozen candidates ran for the open seat, with white supremacist David Duke making a lot of noise in the primary but winding up with 3 percent to place seventh.

In 2004, Kennedy was treasurer when Louisiana became the first state that allowed its investment funds to purchase foreign bonds. A $5 million Israel Bonds purchase was the first step after the legislation passed.

“Israel is the only democracy in the Middle East,” Kennedy said in 2004. “It is America’s only true friend in the Middle East, and it is one of our staunchest allies. I am pleased that we could take this first step in forging a meaningful economic relationship between Israel and Louisiana.”

In 2014, he called Israel “an astonishing success story” and noted the historic and cultural ties, and mutual interests between Israel and the U.S.

In District 3, Captain Clay Higgins, who made an online name for himself as the “Cajun John Wayne,” pulled a surprising runoff victory against Scott Angelle, 56 percent to 44 percent.

Known for his no-nonsense crime reports, in March, Higgins resigned as spokesman for the St. Landry Parish Sheriff’s Office in Opelousas, then was sworn in as a reserve deputy in Lafayette.

Higgins, who expresses support for Israel, blames President Barack Obama and Hillary Clinton for the “nightmare of the globalization of Radical Islamic terror,” and will support all measures to destroy ISIS.

He also calls for the revocation of the Iran nuclear deal as “unlawful and contrary to the best interests of America and thus the free world.” Noting a close friend who is Iranian, he said the people of Iran are not the enemy, as they are longing for freedom from an oppressive regime of “religious zealots.”

An attorney from Benton, Johnson said national defense will be his top priority, since Barksdale and Fort Polk are both located in the district.

He said too many in Washington refuse to use the term “radical Islamic terrorism,” and the U.S. must hold state sponsors of terrorism accountable.

“We must strengthen our relations with allied nations in the Middle East, and pledge every measure of support to the nation of Israel — our faithful friend and the only stable Democracy in the region,” he said. “If we do not extinguish the threat of the terrorists in the Middle East, they will soon bring the fight to our soil.”