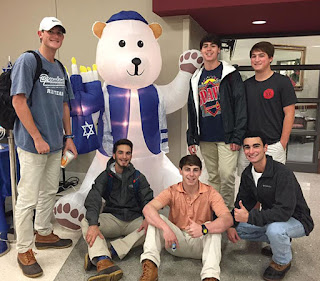 University of Alabama Hillel did a Chanukah display for the campus-wide Stress-Free Daze Holiday Celebration before Finals week.

That statement of Chanukah victory, though, has left others in the Tuscaloosa Jewish community perplexed.

In 2015, shortly after Chabad at Alabama opened, a request to have a menorah as a complement to the campus Christmas tree at the Rose Administration Building was denied, and this year a similar request was denied.

Rabbi Kussi Lipskier, co-director of Chabad at Alabama, said he was told there are designated places for religious expression, and that if this application were allowed, they would have to allow everyone who asks.

Attorney Diana Verm of the Becket Fund said Chabad wasn’t given a clear reason for the denial last year, and they wanted “a public area where people could see” the menorah. The Washington-based group advised Chabad on its second application, which was for a different spot on campus.

Monica Greppin Watts, University associate vice president for communications, said a permit for space at the Rose Administration Building was not approved “because that area is not a location for which grounds use permits are granted.” The second request, for a location outside the Ferguson Student Center, was granted, she noted.

Verm said the university “did the right thing” in allowing the display at the student center, and they issued a press release about the issue because “we wanted them to know we were encouraged by their decision” to ultimately allow a Chanukah display.

Lisa Besnoy, director of the Bloom Hillel at Alabama, said it would be “grossly inaccurate” to say the university is “anything less than avid supporters of Jewish campus life.”

The Hillel has held traditional Chanukah celebrations every year. Besnoy said students have preferred having such events at Hillel, and “we have never requested that a menorah be included at the Crimson Promenade.”

Star Bloom, who has been involved with Hillel for many years, said she doesn’t know of any requests by non-Christian groups for a holiday display either.

In late November, Besnoy said, Hillel was invited by the university — and funded — to participate in a campus-wide Stress-Free Daze holiday celebration at the student center, where they had an inflatable Chanukah bear and a menorah, and handed out doughnuts.

In the past 15 years, the University has made a major effort to boost Jewish enrollment, especially under the presidency of Robert Witt. The Jewish student population at the Capstone has gone from fewer than 300 to approximately 900.

At Hillel, “our numbers are just skyrocketing,” said Bloom.

Assistance from the university also made it possible for Tuscaloosa’s Temple Emanu-El to move into a new facility on campus, with a new Hillel next door in an area known as the “God Quad” because it houses several religious institutions.

Chabad scheduled a Chanukah party at the menorah for Dec. 29.

“I am proud to be part of the Tide and proud of my Jewish faith,” says Zach Greenberg, president of the University of Alabama Chabad Student Group. “We are excited to share this important part of our religious and cultural heritage with the rest of campus this Chanukah season.”

Mirit Eyal-Cohen, associate professor of law at Alabama, said “we are grateful the University allowed the students to display a Menorah outside the Ferguson Student Center. All we want is to be an integral part of campus, and sharing our traditions with those on campus is a big part of that.”