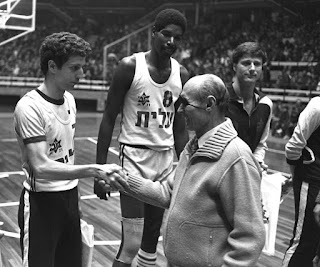 Jewish film festival season gets underway this month with annual festivals in Mobile, Baton Rouge and Jackson, and Jewish film presentations taking place in Oxford in February in conjunction with other events.

There are no duplicated films between the Jackson and Baton Rouge festivals, while three films in Mobile’s lineup — “Fever at Dawn,” “Rock in the Red Zone” and “Fanny’s Journey” — are also being screened either in Jackson or Baton Rouge.

The season starts with the Mobile Jewish Film Festival on Jan. 8 with a 3 p.m. screening of “On The Map” at Springhill Avenue Temple. The film chronicles the 1977 Maccabi Tel Aviv basketball team and its unlikely run as a huge underdog to win Israel’s first Euroleague championship, defeating the four-time champion Soviet Union at a time when the two countries had no diplomatic relations, the Soviets were persecuting Jews and Israel was still somewhat demoralized from the Yom Kippur War.

After the screening, former University of South Alabama Athletic Director Joe Gottfried and his brother, ESPN analyst Mike Gottfried, will speak about I-Team, their new effort to recruit sports figures to advocate for Israel.

The festival moves to the Laidlaw Performing Arts Center at the University of South Alabama on Jan. 10 at 7 p.m. for “The Last Mentsch.” Named the Best Feature in the San Diego Jewish Film Festival, it portrays Menachem Teitelbaum, played by German Academy Award winner Mario Adorf. After Auschwitz, Teitelbaum becomes Marcus Schwartz and develops a new identity. Nearing the end of his life he decides to be buried in a Jewish cemetery, but he had done such a good job of burying his Jewish past that the rabbis refuse his request. He teams with a chain-smoking Turkish woman to voyage to his birthplace and find his past.

“A Love to Hide” at Laidlaw on Jan. 11 at 7 p.m. is one of the few films about deportations of homosexuals during the Nazi regime. The French film is the story of a young Jewish girl who sees her sister and parents slain by a smuggler while trying to escape Europe. She is sheltered by a childhood friend, who is in a same-sex relationship and says she is their Christian employee. But his meddlesome brother causes her to be accused of being the lover of a German officer, resulting in her being sent to a forced labor camp.

“Fever at Dawn” is an unlikely love story between two Hungarian Holocaust survivors, based on the story of writer and director Peter Gardos’ parents.

Miklos, a 25-year-old survivor recuperating in Sweden, was diagnosed with tuberculosis and given six months to live.

Determined to find love, he writes letters to 117 other Hungarian women who are also in Sweden, claiming to have known them from before. One of them, 19-year-old Lili, responds, and they begin a correspondence. Miklos tries to elude his caregivers to visit her.

After Miklos died in 1998, Lili gave their son the collection of letters, leading to the film and book.

In a first for the festival, there will be a Saturday evening film, at Ahavas Chesed on Jan. 14 at 7 p.m. “In Search of Israeli Cuisine” will be this year’s Reita Franco Memorial Film. A portrait of the Israeli people told through food, the film profiles chefs, home cooks, vintners and cheese-makers drawn from the more than 100 cultures that make up Israel today.

Before the screening, there will be a 6 p.m. dinner catered by the Jerusalem Café, featuring Shakshouka and other items from the film. Dinner reservations were due by Jan. 4.

The festival stays at Ahavas Chesed for “Rock in the Red Zone” on Jan. 15 at 3 p.m. “Rock in the Red Zone” is a portrayal of life in Sderot. The town, which has been under rocket fire from Gaza for years, and has a partnership with Alabama through the Alabama-Israel Task Force, used to be known for its rock music scene.

Through the personal lives and music of Sderot’s diverse musicians, and the personal narrative of the filmmaker, who ends up calling the town home, the film chronicles the town’s trauma and reveals its enduring spirit.

A united community of young artists—Jews of mainly Moroccan, Kurdish and Persian descent—has found an artistic outlet for their anger and hope, creating music that fuses various world influences, including contemporary Israeli sounds and North African rock. This collision of conflict and song can even be found in a bomb shelter that doubles as a music club and rehearsal studio.

The Jan. 18 screening of “Fanny’s Journey” will be at the Ben May Library’s Bernheim Hall at 7 p.m. “Fanny’s Journey” is a tale of bravery, strength and survival, a story of a daring young girl who will stop at nothing and fear no one.

In 1943, 13-year old Fanny and her younger sisters were sent from their home in France to a children’s home on the France-Italy border. After a betrayal, they are forced to flee to an Italian foster home for Jewish children. As the Nazis start to move on Italy, their caretakers desperately organize the departure of the children to Switzerland, giving them forged documents and new identities.

Suddenly left on their own, these 11 children have to do the impossible to go through occupied France to reach the Swiss border in order to survive, and Fanny has to take charge of the group.

“The Dove Flyer,” at Ahavas Chesed on Jan. 19 at 7 p.m., is about the last days of the Iraqi Jewish community after the establishment of Israel in 1948. The world’s oldest Jewish community was about one-sixth of Baghdad’s population, but roughly 130,000 Iraqi Jews were forced to leave for Israel and elsewhere. The film is set around a 16-year-old boy’s coming of age story against that backdrop.

Following the screening, Shir Mnuchin, former Israel shlicha for Mobile in 2009, will speak about her family’s story. Her family fled Iraq in 1970, and the 2014 film “Shadow in Baghdad” portrayed her mother’s secret attempts to work with an Iraqi journalist to confirm whether her prominent grandfather had been murdered two years after the rest of the family left.

The Mobile festival concludes on Jan. 22 with “The Lady in Number Six,” a documentary about Alice Herz-Sommer, who was the world’s oldest Holocaust survivor when she died at age 110. A celebrated concert pianist before World War II, she and her son managed to survive Theresienstadt through her music. After the 7 p.m. screening at Springhill Avenue Temple, Jasmin Arkawa of the University of South Alabama will play music featured in the film.

Tickets to Mobile screenings are $8 for adults, $6 for seniors and students. Dinner reservations for Jan. 14 are $26, including the film.

The Baton Rouge Jewish Film Festival starts on Jan. 11 at the Manship Theatre at the Shaw Center for the Performing Arts.

Opening night will be Jan. 11 at 7 p.m., with a double-feature. The short “Blue Like Me” is about artist Siona Benjamin, an Israeli who was born in India, and how she fuses Jewish, Hindu, Catholic, Muslim and Zoroastrian iconography.

That is followed by “400 Miles to Freedom.” Co-director Avishai Mekonen was 10 in 1984 when his secluded community in northern Ethiopia, the Beta Israel, started a secret journey of escape into Sudan on their way to Israel, and their surprise at discovering there were white Jews. The film explores immigration and the lack of awareness of racial diversity in Judaism as he also breaks a 20-year silence about his brutal abduction in Sudan.

“Sunday Shorts” from the Jewish Film Institute will be on Jan. 15 at 3 p.m., a 90-minute selection of short films from around the world, lasting from 5 to 18 minutes each.

Every year the Festival, in association with the Jewish Federation of Greater Baton Rouge, presents a Holocaust educational program for junior high and high school students. This consists of a feature film or documentary with a Holocaust theme. The film is followed by a short talk from a speaker who has first-hand experience with the Holocaust.

The festival also sends teachers to the annual Belfer Conference for Educators in Washington, to learn about approaches to teaching the Holocaust in middle and high schools.

More information about the festival, purchasing tickets and how to be a patron can be found on the festival website. Tickets are $8.50 per show, and patron levels are available from $100 to $2,000.

Jewish Cinema Mississippi kicks off its 15th season on Jan. 24. Sponsored by Jackson’s Beth Israel and the Jewish Culture Organization at Millsaps, the festival is at the Malco Grandview in Madison.

The festival opens on Jan. 24 at 7 p.m. with “Remember,” which was also the opening film for the Atlanta Jewish Film Festival. Academy Award winner Christopher Plummer plays Zev Guttman, a 90-year-old Holocaust survivor with dementia. With suppressed wartime memories surfacing and with the prompting of a wheelchair-bound fellow survivor, he embarks on a mission of vengeance against the former Nazi commander responsible for murdering their families. But his crumbling sense of himself complicates his mission.

“The People vs. Fritz Bauer” will be on Jan. 25 at 7 p.m. Leading German actor Burghart Klausner plays Attorney General Fritz Bauer, who in 1950s Germany tried to bring Third Reich leaders to account. Stymied and slandered by government officials, many of whom had been in positions under Hitler, he quietly allies with Israel’s Mossad to track down and apprehend Adolph Eichmann. This film was the audience award winner at the Locarno International Film Festival.

On Jan. 26 at 7 p.m., “Sabena Hijacking: My Version” recounts a 1972 airplane hijacking that shaped terrorism response in Israel. Members of the Black September Palestinian group took the flight over shortly after takeoff from Vienna to Tel Aviv. Jewish passengers were separated from everyone else, and the terrorists threatened to blow up the plane. The next day, Israel Special Forces launched a rescue operation, with Benjamin Netanyahu, Shimon Peres and Ehud Barak taking part in the raid. The film includes interviews with passengers, recordings from the British pilot, and with the one surviving hijacker.

The Jan. 28 film, “Moos,” screens at 7 p.m. The title character in the Dutch comedy takes care of her father, but when a childhood friend visits, she is inspired to pursue her dream of attending the local performing arts academy and starting her own life. She tells everyone she got in even though she did not, then hoping to re-apply, she secretly starts singing lessons and falls for the tutor.

The Oxford Film Festival in northern Mississippi has two films on Feb. 17 that are being sponsored by the Jewish Federation of Oxford.

“Lives Restarted” chronicles 11 families of Holocaust survivors who made a new life in Memphis, through interviews with three survivors and eight “second generation” survivors. The film, which debuted at the Memphis Holocaust commemoration last May, is directed and produced by Waheed AlQawasmi, who was born in Jordan. AlQawasmi will be at the Oxford screenings.

The documentary will be screened as part of a short documentary block, starting at 10:30 a.m. and 3:45 p.m.

In a block of LGBT films starting at 3:30 p.m., “My Big Fat Lesbian Bat Mitzvah” is based on a true story of a 58-year-old woman who has a bat mitzvah at her LGBT synagogue as a way of coming out to her Orthodox father.

The Oxford Film Fest will be at the Malco Oxford Commons from Feb. 15 to 19.