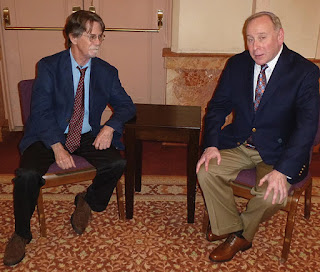 The national Goldberg-Tobin “Civil Discourse” Tour visits Birmingham this month for a debate on “Left vs. Right: The Battle for Israel’s Soul.” Because of the winter storm, the Jan. 8 event was postponed and it will now be on Jan. 16 at 6 p.m. at the Levite Jewish Community Center.

On the left, J.J. Goldberg is editor-at-large of The Forward, former U.S. bureau chief of the Jerusalem Report, former managing editor of the Jewish Week in New York and author of several books, including “Jewish Power: Inside the American Jewish Establishment.”

On the right, Jonathan Tobin is former executive editor of the Jewish Exponent in Philadelphia, and is currently senior online editor for Commentary.

Tobin said the topics to be discussed include the conflict with the Palestinians, the U.S.-Israel relationship, the impact of the new Trump administration, President Obama’s policies as well as the relationship between North American Jewry and the Jewish state.