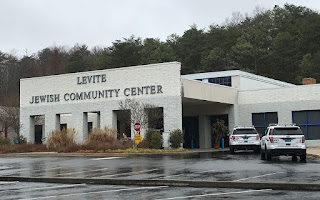 As of early afternoon, at least 27 JCCs in 17 states had received such threats almost simultaneously. This follows a similar barrage on Jan. 9 where 16 JCCs received bomb threats.

The LJCC received the call after 9 a.m., and immediately “went into our protocol,” said Betzy Lynch, executive director of the LJCC.

Authorities were notified and responded “immediately,” and the entire building was evacuated in less than five minutes.

The Cohn Early Childhood Education Center and N.E. Miles Jewish Day School students were taken to a designated place to await their parents.

It wasn’t an easy task — the early childhood students had been scattered everywhere from the swimming pool to recess outside. Some of the youngest children were rolled out in their cribs.

Lynch said they have procedures that have been practiced regularly for many years, and it was simply a matter of executing the plan. Especially because of the previous week’s threats, “we weren’t surprised,” she said. “We were prepared.”

They notified all parents because the process of searching the building would take far longer than they could reasonably keep the children outside, Lynch noted.

Police and the FBI checked the entire 110,000-square-foot building, and bomb-sniffing dogs waited outside in case anything suspicious was found. The building was declared clear just before noon, and the LJCC reopened, except for the preschool.

Lynch praised the Birmingham and Mountain Brook Police, the K-9 unit and the FBI. “We’re incredibly thankful for their response.”

Richard Friedman, executive director of the Birmingham Jewish Federation, praised the Early Childhood staff for an “amazing job in the midst of anxiety and uncertainty.”

Friedman, who had just arrived at the campus when the building was evacuated, said they were able to move small children “in a fairly complicated operation and did it with good spirit and success.” 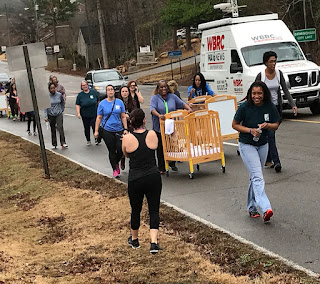 As the staff made their way back from next door after the all-clear, Lynch stood on the side of Montclair Road exclaiming “I salute all of you, amazing job!”

Friedman said “any parent could be comforted by the love, TLC and professionalism” of the staff at the JCC and Day School.

On Jan. 9, 16 JCCs were threatened by phoned-in bomb threats, including Nashville, Columbia, S.C. and four in Florida. Nashville was on the list again today, along with Miami.

The Secure Community Network reported that this time, the caller seemed to be a live person, instead of the recorded message last week.

David Posner, director of strategic performance at JCC Association of North America, the umbrella organization for JCCs, said “While we’re extremely proud of our JCCs for professionally handling yet another threatening situation, we are concerned about the anti-Semitism behind these threats. While the bombs in question are hoaxes, the calls are not. We know that law enforcement at both the local and national level are continuing to investigate the ongoing situation. We are relieved that no one has been harmed and that JCCs continue to operate in a way that puts the safety of their staff, visitors, and premises first.”

The Anti-Defamation League issued a security advisory to Jewish institutions. “Although so far these threats do not appear to be credible, we are recommending that Jewish communal institutions review their security procedures and remain in close contact with law enforcement,” said Jonathan Greenblatt, ADL CEO. “While each incident needs to be taken seriously and investigated closely, thus far we are not aware of any of these threats being substantiated.”

“I am hopeful that the national profile of these incidents will allow the FBI to dedicate resources to finding the person or group responsible for these threats,” Lynch said.

“Obviously, we take the threats very seriously. We are required to,” Lynch added. However, “we fully intend to operate the way we always have and always will.”

Moving forward during a time of increased turmoil, the JCC’s role is to bring positive feelings into the community, Lynch said. “The JCC hopes to be that little flame of light in the darkness, to help people get to know each other and feel good.”

The JCC’s goal is for “people to understand each other.”