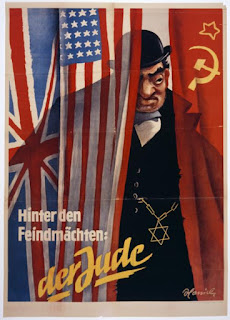 Photo from US Holocaust Memorial Museum, gift of Helmut Eschwege: Bruno Hanisch, “Behind the Enemy Powers: the Jew,” ca. 1942. During World War II, Nazi propagandists frequently depicted “the Jew” as a conspirator plotting world domination by acting behind the scenes in nations at war with Germany. This caricature represents the “Jewish financier” manipulating the Allies, Great Britain, the United States, and the Soviet Union.

For the Nazis to garner popular support so they could pursue their racial policies and expansionist war efforts, they had to come up with a narrative that would appeal to far more of the population than a fanatical fringe.

Featuring rarely seen artifacts, the traveling exhibit “State of Deception: The Power of Nazi Propaganda” draws visitors into a rich multimedia environment vividly illustrating the insidious allure of much of Nazi propaganda. The exhibition opens at the National World War II Museum in New Orleans and will be on display in the Joe W. and Dorothy D. Brown Foundation Special Exhibit Gallery from Jan. 26 to June 18.

The U.S. Holocaust Memorial Museum exhibit examines the definition of propaganda, how it operates, why it works, and how important it is to protect people from its dangers. The exhibition asks visitors to actively question and engage with the messages they see, and to learn from this extreme example that democracies, while appearing strong, are fragile without the responsibility and action of their people.

“Adolf Hitler was an avid student of propaganda and borrowed techniques from the Allies in World War I, his Socialist and Communist rivals, the Italian Fascist Party, as well as modern advertising,” says exhibition curator Steven Luckert. “Drawing upon these models, he successfully marketed the Nazi Party, its ideology, and himself to the German people.”

The exhibition reveals how shortly after World War I, the Nazi Party began to transform itself from an obscure, extremist group into the largest political party in democratic Germany. Hitler early on recognized how propaganda, combined with the use of terror, could help his radical party gain mass support and votes.

He personally adapted the ancient symbol of the swastika and the emotive colors of red, black, and white to create the movement’s flag. In doing so, Hitler established a potent visual identity that has branded the Nazi Party ever since.

After seizing power, the Nazi Party took over all communications in Germany. It marshaled the state’s resources to consolidate power and relentlessly promote its vision of a “racially pure,” utopian Germany that needed to defend itself from those who would destroy it. Jews were cast as the primary enemies, but others, including Roma, homosexuals, Jehovah’s Witnesses, and mentally and physically disabled persons, were also portrayed as threats to the “national community” and territorial expansion was seen as “self-defense.”

Jews were depicted as agents of disease and corruption. The Nazis’ actions against them, in Germany and occupied countries, were promoted as necessary measures to protect the population at large.

At the opening program on Jan. 26, Holocaust survivor Margit Meissner and USHMM educator Sarah Campbell will share their experiences and expertise. There will be a 5 p.m. reception and the program will be at 6 p.m., reservations are required. The event can also be viewed online.

On Jan. 27, the museum will hold its annual International Holocaust Remembrance Day student webinar with Meissner. The free event starts at noon and one may sign up on the museum website.

Meissner was 11 years old when she heard a radio broadcast of one of Hitler’s speeches, her first encounter with Nazi propaganda. During the webinar, Meissner will speak about her experiences before, during, and after World War II, including her daring escape from Paris on a bicycle as the Nazis invaded. Students will not only hear about wartime experiences, but why she still speaks today about the dangers of hate speech. Students will also have the opportunity to direct questions to Meissner and museum educators.