Grab a bagel: Jieux, Mishigas Krewes to parade on Feb. 11 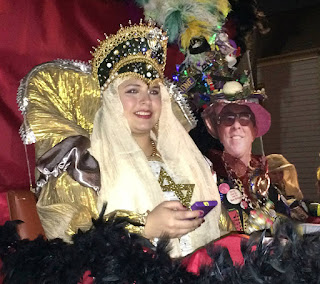 From the 2015 Krewe du Jieux parade

The two Jewish Krewes will head through the streets of New Orleans on Feb. 11.

Krewe du Vieux will launch “The Crass Menagerie” at 6:30 p.m., with the Krewe du Mishigas as one of the sub-krewes.

A satirical and highly adult-themed parade, Krewe du Vieux starts in the Marigny at Decatur and Mandeville, then heads through the French Quarter, mostly on Decatur and Royal Streets, up to Dauphine through the CBD to Lafayette Street, ending at O’Keefe Avenue. The post-parade ball will be at The Civic.

Krewe du Jieux marches as part of the krewedelusion parade. krewedelusion announced on Jan. 19 that it was breaking with Carnival tradition and not naming a Benevolent Ruler, in response to the “abhorrent and historic” presidential inauguration. Captain Oscar Diggs said “our celebration in the streets of New Orleans will be an uprising of the people governed by a radical reorganization of our current administration.”

According to Blaine Kern Sr., current ruler of krewedelusion, no New Orleans Krewe has ever paraded without royalty.

The Feb. 11 parade is scheduled to start in the Marigny at 7:15 p.m. and continue through the French Quarter, finishing back in the Marigny.

Alysse Fuchs was named the new captain of Krewe du Jieux. Rabbi David Polsky, who left Anshe Sfard last summer, will be visiting New Orleans that weekend so he can march once again with the Jieux. He will also deliver the d’var Torah at Anshe Sfard that morning.