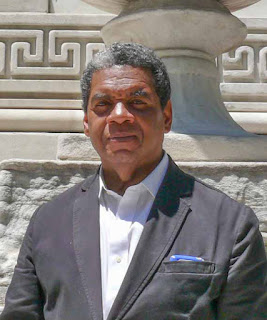 A play about the book that identified places for African-Americans to go during the days of Jim Crow laws and segregation, interwoven with a fascinating twist when a Jewish concentration camp survivor comes into the story, has its Alabama debut Feb. 17 to 19 at the Red Mountain Theatre Company’s Cabaret Theatre in Birmingham.

“The Green Book” is the first work by Calvin Alexander Ramsey, who was born in Baltimore in the 1950s but moved to North Carolina with his family when he was young.

“My dad worked in the steel mills. I remember growing up in Baltimore and befriending many of the nice Jewish merchants. Our communities seemed to have a kinship there and in North Carolina,” he said.

Ramsey would go on to become a university professor and writer. He lives in New York City now, but previously lived in Atlanta and for five years served on the advisory board of Special Collections at Emory University’s Woodruff Library.

Pulling from these resources and his own experiences, Ramsey launched a career as a playwright at age 51 with “The Green Book.”

The two-act play focuses on the difficulties African-Americans faced while traveling during the Jim Crow era. It was based on his research about “The Negro Motorist Green Book,” a manual directing blacks to “safe” restaurants, hotels and gas stations across the country, published from 1936 to 1963.

The play had its premiere at Atlanta’s Theatrical Outfit in 2004 to sold-out houses and rave reviews. It was a finalist in the Last Frontier Theater Conference in Alaska, with critiques given by numerous prominent playwrights, including Louisiana native Tony Kushner.

In the play, the book’s salesman encounters Jacob Lansky, a Holocaust survivor who is on a journey to honor the African-American soldier who had saved his life. Ramsey said their interaction “is very pivotal to the play.”

Lansky is a composite of Holocaust survivors Ramsey met as well as from culling over many hours of tape.

The Actors’ Temple on 148th Street in New York City, a synagogue that also houses a theater, hosted a reading of “The Green Book,” with “Dr. Ruth” Westheimer in attendance.

Ramsey said that despite living in North Carolina during the few last years “The Negro Motorist Green Book” was published, he was not aware of it at the time. His family had moved to North Carolina in 1959 and he went to a segregated school. In 1966, he transferred to a white school in Roxboro, a small town outside of Durham.

“There wasn’t a lot of action in our town but I was very aware with what was happening while Dr. Martin Luther King was alive. I felt a part of it and supported the fight for equal rights,” said Ramsey.

“Thurgood Marshall, Frederick Douglas, Harriet Tubman, they were all from Baltimore and they were our heroes,” he said.

Ramsey is currently working with Red Mountain Theatre Company to develop his civil-rights-infused children’s books into 30-minute plays. One, “Ruth and the Green Book,” is a children’s adaptation of the play, and the other, “Belle, the Last Mule at Gee’s Bend,” speaks of the pivotal role mules played in the fight for civil rights in the isolated Alabama town now famous for its quilts.

Ramsey will come to Birmingham for several days in mid-February and said he was available to speak to schools and organizations in the Jewish and general communities about “The Green Book” and his experiences.

“It is remarkable to see where Birmingham is today versus then. I am looking forward to this opportunity and I hope the play resonates with people,” said Ramsey.