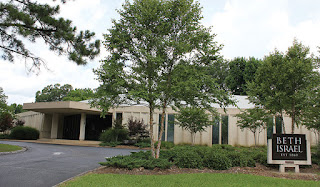 For Beth Israel in Jackson, 1967 was an eventful year, and the next few weeks will be filled with 50th anniversary celebrations.

At the 6:15 p.m. service on Feb. 24, the congregation will have a service in tribute to their building’s 50th anniversary. The Beth Israel choir will perform, and following the service there will be the debut of a documentary by congregant Henry Wiener, who has been interviewing members who were part of the congregation 50 years ago.

This year’s 50th annual Bazaar will be on March 29. Over the weeks leading up to it, members will be preparing dishes for the annual event, which is the only time many of the dishes can be found in Jackson.

Items for the sale and auction are being accepted. No electronics will be accepted for the sale.

This year, there will be a first-ever preview of the annual Bazaar, at the Fondren First Thursday on March 2, starting at 5 p.m. Beth Israel will have a pop-up tent and samples of some of the bazaar’s food offerings.

The congregation was formed in 1860 with the purchase of land for a Jewish cemetery.

The next year, 15 families formally organized the congregation, which met on South State Street and had the state’s first Jewish day school. A marker at what is now a Shell gas station marks the site of the first synagogue building in Mississippi, though other congregations along the river were established earlier but did not yet have their own buildings.

After the original building burnt in 1874, a brick building replaced the wooden building at the same site.

As the community migrated, a new site was discussed for several years, with the congregation building on Woodrow Wilson Avenue. At the 1942 dedication, the first Mississippian to attend Hebrew Union College, Jackson native Rabbi Julian Feibelman of Temple Sinai in New Orleans, was the main speaker.

After World War II, the congregation tripled in size. Classrooms were added, but a larger building was soon needed. The congregation bought its current location in 1964, raised $300,000 and broke ground in 1965.

On March 19, 1967, the final service was held at the old building and a procession was held to the new building for the dedication ceremony. There were 13 ministers, including from African-American churches, taking part in the event. Despite a difficult environment, Rabbi Perry Nussbaum had been active in civil rights for years.

The Catholic and Episcopal bishops gave the congregation silver mezuzahs, which were placed on the front doors.

This year is also the 50th anniversary of the Klan bombing of Beth Israel, which happened on Sept. 18, 1967. Nussbaum’s home was bombed on Nov. 21.