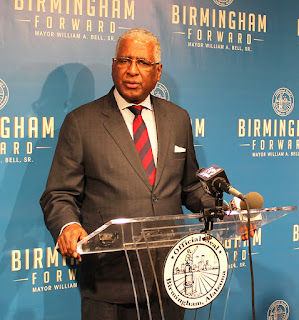 Responding to the fourth wave of phoned-in bomb threats to Jewish Community Centers nationwide, including twice at Birmingham’s Levite JCC, Birmingham Mayor William Bell sent a message that “Birmingham is a city that does not tolerate any kind of hate.”

Bell spoke about the JCC threats at a City Hall news conference today. “We want to reassure the Jewish community and the community around the facilities that our police department and the city of Birmingham will do anything we can to quell such incidents.”

Among other communities affected on Feb. 20 were Nashville, Houston, Milwaukee, St. Paul and Albuquerque.

All of the threats have been hoaxes.

When the call arrived, the LJCC campus, which includes the Birmingham Jewish Federation and Foundation, Cohn Early Childhood Learning Center and N.E. Miles Jewish Day School, went into its safety protocol and was swiftly evacuated as local police responded and searched the building. Normal activities resumed around 10 a.m., after the all-clear was given. The Day School was not in session because of President’s Day.

Betzy Lynch, executive director of the LJCC, said the LJCC staff has trained for years on what to do in this type of situation.

Bell is directing the Birmingham Police Department to use “whatever resources are necessary” to ensure the community’s security, coordinating with the local Jewish agencies on what is most effective.

He said there has been “an uptick” in such incidents nationally because “unfortunately the wrong signals have been sent from a national perspective,” creating an atmosphere that has emboldened those “with malice in their hearts.”

That is why there must be a “public outcry, public denunciations,” Bell said, sending a message that “it’s not acceptable in 2017.”

There were also emailed threats made to the mosques in the Birmingham and Huntsville areas. While the local mosques are outside the Birmingham city limits, Bell said “we’re just as concerned about threats against mosques as we are against synagogues,” and such intimidation goes against the American founding ideal of the right of each individual to freely practice whatever religion he or she prefers.

The American Jewish community’s Secure Communities Network is working with the Department of Homeland Security and Federal agencies. Bell noted any bomb threat is automatically a Federal offense, and “it also constitutes a hate crime, which is a Federal crime.”

Lynch thanked Bell and the city “for the continued efforts to rid our community from hate,” and for the ongoing partnership with local police and Federal law enforcement.

“Additionally,” Lynch said, “we want to thank the entire Birmingham community for their support of the important work that the LJCC has been doing for 110 years. Our goal has always been to bring people of all faiths and races together to enjoy educational, camping, wellness, recreational and cultural programs that build a strong community.”

After the bomb threat on Feb. 20, Lynch said, a non-Jewish man came to the LJCC and became a member specifically to show solidarity with the Jewish community.

Birmingham Councilwoman Sheila Tyson offered her assistance, and said “People are losing their minds these days… you are all in my prayers.”

Faith in Action Alabama and Greater Birmingham Ministries will hold “a time of solidarity and prayer with your community of faith” outside the LJCC at noon on Feb. 24. The statement read “These recent threats across our country and here at home break our heart and we want to do all we can to stand with and for you as beloved members of our Birmingham community.”

They are planning a similar event “for peace, the end to violence and hatred, as well as the mending of all creation” at the Hoover Crescent Islamic Center south of Birmingham during its open house on Feb. 26.

Also, on March 6 the LJCC will host “a town hall meeting with our local law enforcement partners” at 5:15 p.m.

After the bomb threats, Ivanka Trump tweeted that “America is a nation built on the principle of religious tolerance. We must protect our houses of worship & religious centers.”

On Feb. 21, while visiting the National Museum of African-American Culture and History, President Donald Trump said the threats “are horrible and are painful and a very sad reminder of the work that still must be done to root out hate and prejudice and evil.”

Later in the day, he told MSNBC “Anti-Semitism is horrible, and it’s going to stop, and it has to stop.”

David Posner, director of strategic performance at JCC Association of North America, said “While we are relieved that all such threats have proven to be hoaxes and that not a single person was harmed, we are concerned about the anti-Semitism behind these threats, and the repetition of threats intended to interfere with day-to-day life.” They are in regular communication with the FBI and “We hope to hear updates from the FBI on progress very soon.”

At his news conference, Bell also addressed the recent leafleting of several Birmingham neighborhoods with flyers purportedly from the Mississippi-based Klan group United Dixie White Nights. While people have the right of free speech, Bell said “they don’t have the right to incite violence” and “we’ll take the proper measures.”

He noted that after a similar leafleting several months ago, disgusted residents got rid of the flyers before officials got there.