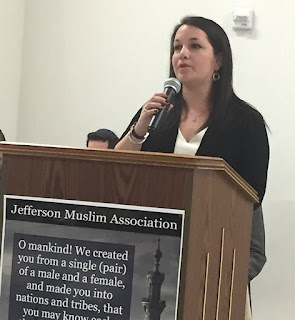 Rabbi Alexis Pinsky spoke at a Feb. 9 interfaith solidarity gathering at a Muslim school in Kenner.

Rabbi Alexis Pinsky, assistant rabbi at Gates of Prayer in Metairie, informed the congregation’s board that she will be leaving at the end of June.

In January, Rabbi Robert Loewy announced that he will be retiring in the summer of 2018. He has led the congregation since 1984.

Pinsky was brought to the congregation to do outreach to the unaffiliated and younger Jews. As Gates of Prayer President Richard Levin said, “When Rabbi Pinsky first started with us, we had a vision of something that we didn’t have a name for at the time, which has now become known as TRIBE. Her success has exceeded our expectations.”

Thanks to Pinsky, Levin said “we now have a thriving 20s/30s community. We hope to build on her success, and continue her good work.”

TRIBE has a “wandering” monthly Shabbat service in a different venue around the city each time. There is also a monthly Shabbatsana, a Shabbat morning yoga and meditation gathering, usually outdoors at City Park.

A native of Atlanta, Pinsky graduated from Tulane University before entering rabbinic school. Upon being ordained in 2015, “I was thrilled to be starting my rabbinic career in a city that I already thought of as home.”

Pinsky said “Gates of Prayer is a wonderful community, and this transition is certainly bittersweet. I cherish all of the connections that I have made and the relationships that have been built with the people in this community.”

She is especially proud of the progress TRIBE has made. “Engagement is such important work… I have taken great joy in building up successful programming around the Greater New Orleans area.”

She thanked Loewy for his example “that has taught me so much about the rabbinate that I aspire to build.”

In her letter to the congregation, she said “in all of my experiences at Gates of Prayer, you, the congregants are what have made them so wonderful.”