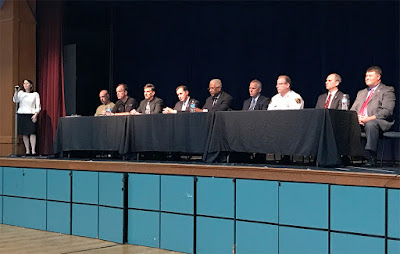 There was a major show of political and legal force at Birmingham’s Levite Jewish Community Center on March 6, as the community was updated on security issues following three phoned bomb threats that were part of a national wave.

Among those on hand were Birmingham Mayor William Bell and Congressman Gary Palmer, along with representatives of the FBI, Alabama Bureau of Investigation, the ATF, Birmingham Police and the Jefferson County Sheriff’s Department.

The next morning, 14 hours after the forum, the campus received its fourth bomb threat, this time at the N.E. Miles Jewish Day School.

At least 12 JCCs and Jewish schools were threatened on March 7, including in Boston, Chicago, Syracuse, Toronto, Portland, Rochester, Davie, Fla., and Rockville, Md.

Almost half of the JCCs in the U.S. have received threats since the beginning of the year. The LJCC also received threats on Jan. 18 and Feb. 20, with the Day School receiving a threat on Feb. 27.

The March 6 forum filled the LJCC auditorium, with many wearing the blue and white ribbons distributed by the Parents of the LJCC group that emerged after the first threats.

One of the group’s organizers, Rebekah Weinberger, said “as a Jewish mother, I never thought my kids were going to have to deal with this.”

As the forum began, LJCC Executive Director Betzy Lynch thanked those who have been “key and integral in helping us through the difficult times we have faced for the last two months,” including the leaders of the campus partner agencies.

She also thanked the parents of the preschool and Day School parents, and said “the amount of support we’ve had in this community is second to none.”

Most of the questions came from concerned preschool and Day School parents, filled with praise for local law enforcement, Mayor Bell and Rep. Palmer, but with concerns about the national investigation’s status.

Bell noted that children are “the most precious responsibility you have,” and that is why they were on stage for the forum.

Lucas Gambino attended the meeting to offer support from the local Muslim community. ‘Our community is here to help in any way we can,” he said.

Lynch responded that “we stand with you against these things as well,” as the local mosque has received threats recently.

Sergeant Heath Boackle, who heads the K-9 unit for the Birmingham Police Department, urged members not to be alarmed if they see the K-9 unit in the building. “We are going to be doing some different things… in and around the facility.”

After the March 7 threat, he visited with the students to reassure them, and told them that the unit would be there on occasion when there isn’t a threat.

Captain David Thompson of the Jefferson County Sheriff’s Office said a surveillance trailer that is monitored constantly was deployed in the LJCC parking lot.

David Hyche of the Bureau of Alcohol, Tobacco and Firearms said “our agency was asked to provide security training to the staff here… the staff was very pro-active.”

He added, “We also have our intelligence people working closely” with city, county and state officials.

Last week, Bell had a meeting with leaders of the LJCC, Federation and Day School.

He said “In Birmingham, we will not tolerate any bigotry” and said he was at the event “to show my support and to represent the other citizens of Birmingham, to let you know we will do all we can.”

Birmingham Police Department Deputy Chief Alan Hatcher of the field operation bureau urged members to be vigilant and report anything that ever appears unusual.

Palmer echoed that, saying “don’t be afraid to do it, don’t be embarrassed.”

Officers are patrolling the LJCC during operating hours and during other times. Captain Allen Treadway of the Birmingham Police Department’s East Precinct said “All the officers you see here work for me, and we’ll keep that presence here as long as it is needed.”

Special Agent In Charge Roger Stanton of the FBI Birmingham Division spoke of the collaboration among agencies. “We are putting the full force of all our resources toward this threat so we can conduct a thorough and efficient investigation,” he said.

Stanton said one of the first calls he got after the threats began was from Palmer’s office, asking if the FBI needed anything. “He wanted to make sure this threat was our highest priority.”

As this is a national phenomenon, Stanton said FBI divisions nationwide are working on the case and “it’s got the attention of the director of the FBI… we are putting our full force behind this investigation,” and with their law enforcement partners “we will be successful.”

Scott Bartle of the Alabama Law Enforcement Agency also participated in the forum, and Jefferson County Commissioner David Carrington was in attendance.

Lynch announced the Birmingham Jewish Foundation had issued a “significant emergency grant” on March 5 to help pay for short-term and mid-term security needs.

Donald Hess is leading a task force to assess security needs in the community, not just on the LJCC campus but in synagogues and other institutions, and explore the best way to fund those enhancements.

The ATF recently had a two-hour training session with LJCC and Day School staff to fine-tune bomb threat protocol after the first three experiences.

Several experts have toured the LJCC campus and made recommendations on physical enhancements and protocol changes, some of which have been implemented and others which will be done soon. Not all of the changes will be publicized.

One frequent recommendation was the permanent closing of the fitness center entrance. Effective March 12, that will become an emergency exit only. Last year, the entrance was open just during the summer when the outdoor pool was operating, but that will no longer be the case, and everyone will need to enter through the main lobby. Many other exits, such as the gymnasium doors to the parking lot, will also become emergency exits only.

LJCC President Allison Weil said “we realize it’s going to make some people upset, but it’s another layer of security we have to do.”

Lynch noted that for 100 years, the LJCC has been a welcoming place for the entire community, and “if we take away that warm, haimish feel… we will have lost a part of who we are. That is not what we are trying to do” with the enhanced security procedures.

This summer, the LJCC is hosting the JCCA Maccabi Games, bringing about 800 Jewish teens from across the U.S. and around the world to Birmingham for a week of athletic competitions and service projects.

Lynch said law enforcement has been working with the LJCC even before the threats began, as strict security is already a large component of hosting the games. Those measures “would have happened regardless of this set of circumstances.”

The decision had already been made that competitions will not be held at the LJCC so the facility would be available for members. Several venues around Birmingham have already been announced as competition sites.

Lynch said the threats have “heightened the importance” of the Maccabi Games, the first ever to be hosted in Alabama. “This is our way of showing whoever is doing this to us that the continuity of Jewish life and our Jewish future is happening here in Alabama,” and showing solidarity “can be one of the most important things we can do.”

The parents’ group is making sure the issue does not get swept under the rug.

Weinberger said after the forum that she was terrified by the first bomb threat, as she was in the building when it happened. After the second one, “I was frustrated, and that’s when we put together Parents of the LJCC.” When the third threat happened, “we were really ticked off.”

She called the office of Alabama Governor Robert Bentley to get him to say something about the situation and was “passed around for 20 minutes” before being told he wasn’t planning to say anything.

Once word spread among the parents’ group, they inundated Bentley’s office with calls, and later that day he issued a statement, saying “as the Governor of every person of Alabama, I will not tolerate targeted threats against any segment of the community.”

“We want to hold our legislators and our elected officials accountable,” Weinberger said.

On March 8, Alabama Attorney General Steven Marshall condemned the threats. “I join with all law-abiding Americans in expressing disgust at such cowardly threats and want to make it absolutely clear that my office, if called upon, will commit whatever resources and support our federal partners may require to apprehend and bring to justice those responsible. Laws have already been broken when these callers made terroristic threats and the guilty must be held to account.”

The JCC Association sent a letter to Attorney General Jeff Sessions expressing frustration with the “progress in resolving this situation.”

Praising local law enforcement across the country, the letter asks for Sessions to meet “to discuss specific steps that will be taken to deter further threats, discuss security needs, and seek justice,” and that the Department of Justice “treat this case with the utmost urgency it deserves.”

The letter was signed by 141 JCC movement leaders. The LJCC’s Lynch is not listed, as she was out sick when the letter was being circulated.

Friedman and Lynch met with the Birmingham Community Affairs Committee on March 6 to brief them, pointing out that with a membership that is two-thirds non-Jewish, attacks on the LJCC are “an attack on the broader Birmingham community.”

Another parents meeting will be held on March 15 at 5:15 p.m., with a counselor to discuss how to speak to children about the current situation.

The LJCC had a community-based Employee Appreciation Day on March 7, for those who have had to deal with the threats and the concerns that follow.

Chair massages, cookie cakes and other treats were provided to the staff. Hand In Paw brought some therapy dogs to hang out in the auditorium, members of the Alabama Symphony performed and Babe Ruff, the Birmingham Barons’ mascot, stopped by.

“We know we need to take care of them, because they are taking care of your kids,” Lynch said.

Smith’s Variety in Crestline, not far from the LJCC, is donating blue and white mailbox ribbons for anyone who wants to show support to the LJCC, and has a donation bucket in the store with proceeds going to the LJCC.

On March 8, South Highlands Presbyterian Church across from Birmingham’s Temple Emanu-El invited the Jewish community to its Lenten dinner and service as part of its “Who is my neighbor” seasonal theme. During the dinner, Lynch gave an overview of the situation.

And in an only-in-the-South show of support, part of the proceeds from the crawfish boil at Little Savannah Restaurant and Bar on March 11 from noon to 4 p.m. will be given to the LJCC to help with security costs.