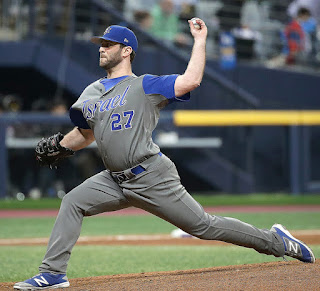 New Orleans native Jeremy Bleich is on what many would have figured to be an unexpected trip to Tokyo, as part of Team Israel that is stunning everyone at the World Baseball Classic.

Israel swept Pool A, a four-team round-robin, this week, advancing to the next round in Japan.

Ranked 41st in the world and as the final team to qualify for the 16-team tournament, Israel wasn’t expected to do much with a group mostly of Jewish Americans, mostly with minor-league experience. Every other team in the tournament is in the top 20 in world rankings.

Players are eligible to compete for a country if they are eligible for citizenship; with Israel’s Law of Return, that makes any Jewish player in the world eligible.

Even before the tournament began, the novelty of Israel’s first appearance in the Classic was fodder for a wide range of stories. ESPN called Israel the “Jamaican Bobsled Team” of the tournament, and the 3-0 start is being seen as the stuff of miracles.

An alumnus of the Isidore Newman School, Bleich attended Stanford and was drafted in the first round by the New York Yankees in 2008. He has played with the Yankees, Philadelphia Phillies and Pittsburgh Pirates organizations, including the last three seasons at the Triple-A level. Last season, he was a reliever for the Somerset, N.J., Patriots.

He is the son of Caron and the late Stan Bleich.

In interviews, Bleich has spoken of the opportunity to play for Team Israel in the context of honoring his grandparents, who were Holocaust survivors.

On January, 10 of the team members visited Israel. Bleich was one of only two who had visited Israel before and was a “go-to guy” for the others when they had questions.

On March 6, Israel opened the tournament by stunning their hosts, South Korea, 2-1 in 10 innings.

The 5th inning began with Zack Thornton allowing a walk and then hitting a batter, prompting Bleich to be called from the bullpen. After a called strikeout, Bleich gave up a single to Geonchang Seo, allowing Kyoung-min Hur to score the only run for South Korea. The next two batters fouled out to end the inning.

Bleich started the 6th inning by giving up a single to Ah-seop Son, after which Gabe Creamer came in.

Bleich did not play in Game 2 later that day. Israel jumped out to a 4-0 lead in the 1st inning and never looked back, taking a 15-7 win over Chinese Taipei.

South Korea and Taipei, neither of which advanced, were both ranked in the top 5.

In Game 3 against the ninth-ranked Netherlands on March 8, Israel again stormed to the lead, 3-0, in the 1st inning, and made it last, winning 4-2.

Up 4-1 going into the 8th, Bleich came in and got the first out, then Sharlon Schoop reached on a throwing error. After walking Xander Bogaerts, Bleich was replaced by Josh Zeid, who gave up a walk to load the bases. After a forceout and a throwing error, Schoop scored the unearned run, making it 4-2.

In a widely-praised move, as team members removed their baseball caps for Israel’s national anthem, “Hatikvah,” they sported blue yarmulkes.

The top two teams will advance to the championship round at Dodger Stadium in Los Angeles, March 20 to 22. Games are being broadcast on MLB Network.

Between rounds, teams can add and drop up to two pitchers from a previously-designated pool. Jared Lakind, a Pittsburgh Pirates left-hander, was added to Team Israel for Pool E. He is a native of Cypress, Tex.