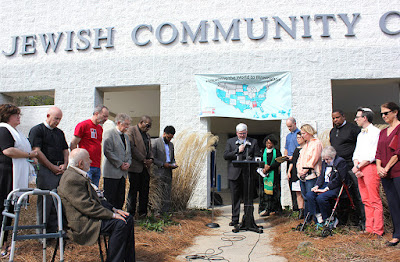 An emergency fundraising campaign has been launched by the Birmingham Jewish Federation to enhance security at the Birmingham area’s Jewish institutions.

Chaired by Donald Hess, the campaign has a goal of up to $1 million and will focus in part on the community campus on Montclair Road, which contains the Levite Jewish Community Center, Cohn Early Childhood Learning Center, N.E. Miles Jewish Day School, and the Federation and Birmingham Jewish Foundation offices.

Area synagogues and other institutions will also receive funds to enhance their security.

The campus has received four bomb threats since mid-January as part of a national wave of phoned and emailed threats. Each time, local law enforcement authorities have swept the campus and found nothing. Of the over 100 incidents nationally, affecting about half of the JCCs in the United States, all have been hoaxes.

The campaign was authorized by the Federation board on March 15. The Birmingham Jewish Foundation had already made a large emergency allocation for immediate security needs.

With two-thirds of the LJCC membership being not Jewish, the local Christian and Muslim communities have also rallied around the facility, including taking an active role in the security campaign.

A group of Christian leaders has been formed to ask their constituents to take part.

On March 9, Rick Burgess of the national Rick & Bubba radio show spoke about the situation in Birmingham and urged donations to the LJCC through a web page the National Christian Foundation of Alabama had set up, linking to it from their show’s web page.

On the air, he read a letter urging support, written by Pastor Harry Reeder of Briarwood Presbyterian Church.

“We appreciate all those who have stepped forward to help and thank those who will be stepping forward,” Hess said. “We have great Jewish institutions in Birmingham and wonderful friends — and this frustrating saga has demonstrated all of this once again.”

Usually, a fundraising campaign includes specifics on how the money will be used, but in this case the appeal has to be vague.

Numerous security experts have visited the campus in recent weeks and made recommendations. Some are obvious and visible, such as the presence of off-duty police officers, a county sheriff’s office surveillance truck and the closure of the Fitness Center entrance. Law enforcement has advised the LJCC not to publicize other aspects of the security enhancements, logistical plans and procedures, or recommendations. “They are necessary and all expenditures will be reviewed carefully,” Hess said.

The campaign will cover everything from immediate and short-term needs to long-term plans.

Donations to the campaign can be made through the BJF website or by contacting the Federation office.