Though arrest made in JCC threats, vigilance still seen as necessary 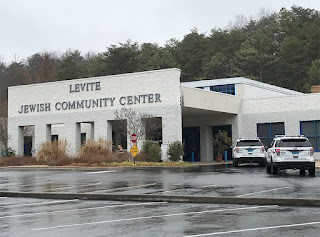 Though there was a sigh of relief at the news that an arrest has been made for most of the bomb threats called in to Jewish Community Centers and Jewish schools around the United States since mid-January, mixed with shock about who the suspect is, vigilance is still being recommended.

The shock came from where the calls reportedly originated. A 19-year-old resident of Ashkelon, with dual United States and Israeli citizenship, was arrested on suspicion of making the calls. His identity has not been released, nor has any motive.

U.S. Attorney General Jeff Sessions said in a statement that “Today’s arrest in Israel is the culmination of a large-scale investigation spanning multiple continents for hate crimes against Jewish communities across our country.

“The Department of Justice is committed to protecting the civil rights of all Americans and we will not tolerate the targeting of any community in this country on the basis of their religious beliefs,” Sessions said.

Israeli investigators first started looking at the unnamed suspect following a threat in New Zealand six months ago. His home reportedly had a large antenna and “unusual hardware,” using “complex methods” to keep from being identified.

His father has also been detained and is being questioned as to how much he knew of his son’s activities.

Media reports in Israel say he was rejected by the Israel Defense Forces as unfit for service, and “possibly has psychological and social problems.”

Ynet reported that his attorney told the court he has been homeschooled since developing a brain tumor at age 14, and that the tumor has affected his behavior ever since.

Ynet also reported that during the arrest, the suspect tried to go for a policewoman’s gun and harm himself.

In addition to over 100 calls to JCCs and Jewish schools in North America, the suspect is accused of threats in Europe and Australia, and causing an emergency landing by a Delta Airlines flight after a threatening call. He also reportedly called Israel’s emergency number to report bombs in several Israeli schools.

Gilad Erdan, Israeli minster of public security, said “We hope that this investigation will help shed light on some of the recent threats against Jewish institutions, which have caused great concern both among Jewish communities and the Israeli government.”

The Jewish Community Center Association of North America was briefed by the FBI this morning. Doron Krakow, JCCA president, said “we are gratified by the progress in this investigation, and applaud the commitment and leadership of the FBI and other federal agencies, Israeli law enforcement, and local law enforcement across the United States and Canada.”

He noted that “We are troubled to learn that the individual suspected of making these threats against Jewish Community Centers, which play a central role in the Jewish community, as well as serve as inclusive and welcoming places for all — is reportedly Jewish.”

Jonathan Greenblatt, chairman of the Anti-Defamation League, said “We are deeply grateful to the FBI, the Department of Homeland Security, and the state and local law enforcement officials who made this investigation the highest priority.”

Greenblatt cautioned that “even though it appears that the main culprit behind the majority of these attacks has allegedly been identified, anti-Semitism in the U.S. remains a very serious concern. No arrests have been made in three cemetery desecrations or a series of other anti-Semitic incidents involving swastika graffiti and hate fliers. JCCs and other institutions should not relax security measures or become less vigilant.”

That was echoed locally. Richard Friedman, executive director of the Birmingham Jewish Federation, said “It is important to remember that this person presumably had nothing to do with the rash of swastika paintings we have witnessed (nationally), the desecration of Jewish graves that have recently occurred, the distribution of anti-Semitic literature that has taken place in different parts of the country, and the firing of a bullet through a window at a synagogue in Evansville, Ind. Thus, all Jewish institutions and Jewish communities need to continue to remain vigilant.”

In a statement, Hess and Friedman said the Federation is in touch with the national Jewish agencies regarding the latest developments, and will “assess what security enhancements are necessary to ensure the safety and well-being of our Birmingham Jewish institutions, and we will communicate this information to our community in a timely and transparent way.”

The Federation statement concluded, “we remain grateful for the understanding and support we have received from so many, both from the Jewish community and broader community, and will continue to keep everyone informed.”

What is Possible? New JLI course has the answers