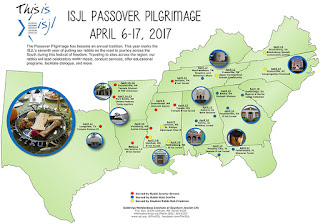 With almost two dozen communities on the schedule, the Jackson-based Institute of Southern Jewish Life is sending out three rabbis for the 2017 Passover Pilgrimage.

Rabbi Jeremy Simons, ISJL director of rabbinic services; Rabbi Matthew Dreffin, associate director of education; and rabbinic intern Student Rabbi Rob Friedman will take to the road for the seventh year of the pilgrimage, hitting eight states in just over a week.

Last year, the ISJL created a freedom-themed reading, written specifically for the Passover Pilgrimage but appropriate for all Seder celebrations. Another new reading has been created for this year, and will soon be available on the ISJL’s website and social media platforms. Sharing in these words will be one more way that all of the communities participating in the Passover Pilgrimage will have a connected, shared experience.

This year, Passover begins at sunset on April 10, but the pilgrimage starts on April 6 as Simons visits Ahavath Rayim in Greenwood. He will be at B’nai Israel in Natchez on April 7, ANshe Chesed in Vicksburg on April 10, B’nai Israel Traditional Synagogue in Alexandria on April 11 and Temple Emanu-El in Longview, Tex., on April 12.

On April 13 he will start at B’nai Israel in Tupelo and then head to B’nai Israel in Jackson, Tenn. On April 14 and 15 he will be at United Hebrew Congregation in Fort Smith, Ark., followed by Temple Shalom of Northwest Arkansas in Fayetteville on April 15 and 16.

Dreffin will start at Mishkan Israel in Selma on April 10, followed by Shomrei Torah in Tallahassee on April 11, Beth Shalom in Auburn on April 12 and B’nai Israel in Panama City on April 13.

On April 14, he will be at B’nai Israel in Fayetteville, Ga., then Rodeph Sholom in Rome, Ga., on April 15, and Shalom B’Harim in Dahlonega and Camp Coleman on April 16.

On April 16 at 4 p.m., Dreffin will speak at the Skeptics and Believers Show, at Experience Community in Murfreesboro, Tenn.