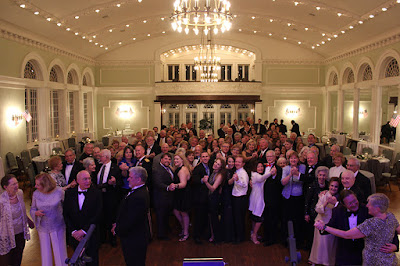 A Vicksburg Jewish landmark that has hosted many stylish events over the decades hosted a centennial celebration in grand style.

A black tie optional gala attracted about 120 guests on March 25 at the B’nai B’rith Literary Club, commemorating the 100th anniversary of its March 1917 dedication and featuring the 24-piece Capitol City Stage Band.

Proceeds from the event benefit the Vicksburg Foundation for Historic Preservation.

Stan Kline, president of Vicksburg’s Temple, Anshe Chesed, said the evening “wouldn’t be much of a gala with our 10 people” remaining in the Vicksburg Jewish community.

At the beginning of the dance, he gave a brief history of the Vicksburg Jewish community. “How does one condense 175 years” into two minutes, he asked.

Dan Fordice, who owns the building, spoke of the building’s history and read from the club’s bylaws, saying it was formed “for the improvement of the intellectual, moral, social and physical condition of its members.”

The facility hosts a wide range of events, including a large number of weddings each year.

The original building, built in 1905, burned around 1915. The current building at 721 Clay Street, with marble stairs and a carved limestone exterior, was dedicated in 1917, and Kline said at the time there were 650 members.

“This time it wasn’t going to be one mae primarily of a flammable material,” like the previous wooden structure, Fordice said.

A large ballroom is on the top floor, and in the basement was the first indoor swimming pool in Vicksburg. The pool had separate hours for men and women because the men did not wear swimsuits.

Being able to view the pool was a major attraction, as it is generally closed off. After the building was renovated and started hosting events, the sheriff came to Fordice and told him he needed to build a wall downstairs.

Before, Fordice explained, when one got off the elevator, the pool was right there. After numerous instances of drunken party guests being found skinny-dipping, the sheriff “basically demanded” the wall to close off the pool. Access is also restricted for liability reasons.

During its years as the club, the building’s amenities included a poker room and a restaurant.

As the Jewish community dwindled and Anshe Chesed moved to a smaller facility away from downtown, the B.B. Club was sold to the city in 1967, which used it as a police station, covering up the ballroom and carving typical offices out of the space.

The city installed paneling over the mahogany walls. The ballroom had an eight-foot drop ceiling and fluorescent lights installed, but Kline said they miraculously did not damage the ornate qualities of the building in covering everything up.

The pool was boarded over, and the evidence room was next to where the pool was.

The city moved out in 1996 when a new police headquarters was completed, and in 1999 the building was purchased and returned to its former grandeur by Laurence Leyens, with then brother-in-law Fordice. The renovation process cost about $1.3 million.

Leyens’ family had been in Vicksburg since around 1860, establishing a candy store that was later sold to the Biedenharn family, later becoming the first place where Coca-Cola was bottled.

His father sold the Valley Dry Goods Store shortly before Leyens graduated from Millsaps, so he moved to California and sold insurance.

Upon hearing that the city planned to tear down the BB Club for “another parking lot” he and Fordice stepped in and bought the building.

He said after the city’s adaptations were removed, police officers who had worked in the building for years were stunned to see what had been hidden.

Leyens then successfully ran for mayor in 2001, serving two terms.

Kline worked on a historical display in the library on the first floor, with much of the information coming from two boxes of memorabilia on loan from the Institute of Southern Jewish Life’s archives, including handwritten club ledgers from the early days.

Additional material came from a display Anshe Chesed did 15 years ago for the congregation’s 160th anniversary.

Storycook Favorites has its catering business in the building and is the in-house caterer for events there.

In 2005, she moved down the block to the BB Club, becoming the exclusive caterer when Fordice purchased Leyens’ share of the building.

When guests entered for the gala, a photo normally hanging in the foyer was displayed, showing the ballroom filled with dancers at the March 8, 1917 dedication. The main thing Fordice wanted to accomplish was replicating that photo at the beginning of the dance, so the 2017 picture could join the 1917 photo on the wall.