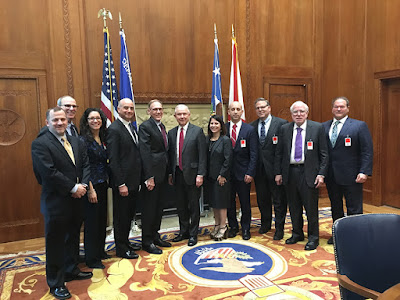 Other groups represented at the meeting included the Anti-Defamation League, the Conference of Presidents of Major American Jewish Organizations, Jewish Federations of North America, and Secure Community Network.

On March 23, an Israeli teen was arrested for making the bulk of the threats.

Sessions praised Jewish community leaders for “their responsiveness, efficiency, calm and competence in the face of those who would threaten these institutions and the millions of Americans who walk through their doors.”

JCCA President and CEO Doron Krakow said “we are pleased by the ongoing engagement from Attorney General Sessions, the FBI, and other federal agencies on this case.

“The Attorney General heard our call for continued vigilance. We were gratified to hear from Attorney General Sessions that every incident is significant and won’t be tolerated. We are appreciative that he understands the continued impact these threats have had on Jewish institutions and the role law enforcement can play in helping to prevent further acts of terror.”

New Orleans native Richard Stone, a previous Chairman of the Conference of Presidents of Major American Jewish Organizations, said, “The Attorney General was extraordinarily sensitive to the growing threat of anti-Semitic incidents in the United States and expressed a serious intention to do everything the Justice Department can do to ensure both the safety and the quality of the American Jewish community. The Conference of Presidents was glad that it could join our colleagues from JCC Association, JFNA, ADL and SCN in such an encouraging and important meeting.”

Stephen P. Seiden, chair of the JCCA Board of Directors, said “We are looking forward to continued collaboration with government at all levels as we ensure that our JCCs are following the very best safety and security protocols, and that JCCs can continue serving as vibrant and welcome community gathering places for all members of the community — both Jewish and many members of the wider public. We are confident, at the centennial of JCC Association of North America this year, that JCCs are safer today than ever before.”

Other members of the delegation also shared their appreciation for the continued hard work being done by the Department of Justice and other law enforcement agencies.

Jonathan Greenblatt, CEO and National Director of the Anti-Defamation League, said, “We thank the Attorney General for meeting with us. We shared our gratitude for his work and the efforts of the Department of Justice and the FBI in response to recent bomb threats. We were very encouraged to hear the Attorney General commit to the enforcement of existing hate crimes laws in light of ongoing incidents targeting Jews and other minorities.

Jerry Silverman, President and CEO of the Jewish Federations of North America, said, “Jewish Federations of North America was privileged to join our partners at JCC Association for this meeting with Attorney General Sessions. We were very appreciative to hear from the Attorney General who truly cares and won’t tolerate hostility and hate. We thank federal law enforcement for their support and commitment.”