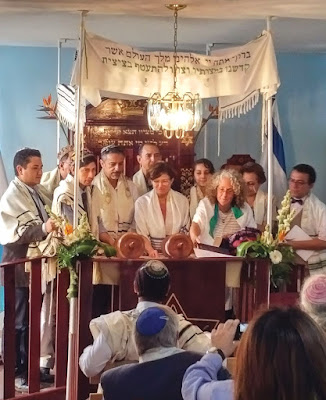 Last summer, a chapter of Southern Jewish history closed in Arkansas with the deconsecrating of Anshe Emeth in Pine Bluff. Eight months later, a new chapter started a bit further south, as a Torah scroll from Anshe Emeth was dedicated at Adat Israel, a new Reform congregation in Guatemala City.

After 150 years, Anshe Emeth held its final service on June 11 in the chapel of First Presbyterian Church in Pine Bluff, where the congregation had met since selling its final building in 2003.

Rabbi Eugene Levy of Little Rock, who officiated at Anshe Emeth in its final years, accompanied the Torah to Guatemala for the Feb. 25 ceremony, along with Karen Kahn Weinberg, a third-generation Anshe Emeth member now living in Atlanta.

They met up with Rabbi Elyse Goldstein of Toronto, who visits and mentors the Guatemalan congregation.

In 2008, Adrienne Rosen, Goldstein’s best friend, started the Guatemalan Children’s Fund and asked her to be on the board — but Goldstein had to visit Guatemala first as part of a delegation. While there, she wanted to find a Jewish community for Shabbat services, and found three — Chabad, an Orthodox congregation and a small group meeting in homes. Figuring the small group was likely closest to the delegation’s orientation, they visited, not knowing what to expect.

Jeannette Orantes, president of Adat Israel, said the group of a couple dozen was formed in 2005 and is made up mostly of people who have converted to Judaism, many claiming hidden Jewish ancestry dating back to the exile from the Spanish Inquisition, though only one could definitively trace it.

Goldstein said she “fell in love” with the group and became their volunteer rabbi, helping guide them in their Jewish journey. She visits once a year and does Skype sessions during other times. She also arranges for other rabbis to visit.

In 2013, she helped officiate a formal conversion ceremony for 19 members, followed by three Jewish wedding ceremonies that night.

Orantes said “One of the main purposes of Adat Israel is to receive other Jews, any color, any orientation, by choice, etc. to celebrate together our very special Jewish moments.”

The congregation had a borrowed Torah that they were eager to return to its owner after a misunderstanding over whether it had been donated or loaned to them. Goldstein helped them apply to the World Union for Progressive Judaism and become a recognized Reform congregation. The World Union also facilitates Torah transfers, and when the Pine Bluff Torah became available, the match was made.

At the dedication weekend, Rabbi Joseph Edelheit represented the World Union in the transfer of the Torah.

After the Pine Bluff ceremony, Levy arranged to have a crate built for shipping the Torah, which was insured through Lloyd’s of London as an antiquity. When asked by the agent how old the Torah is, he remarked that it was given to Moses at Mount Sinai.

Two days before the flight, he went to the airport in Little Rock to check the logistics with the airline. “They were very accommodating” and did not charge for transporting it.

In Guatemala, Orantes led a delegation that met them at the airport and took the Torah to the Temple. 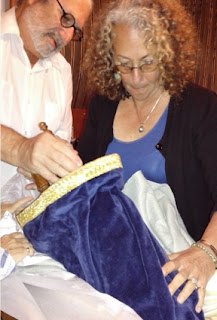 Before the Shabbat evening service on Feb. 24, they had an informal ceremony to open the crate. “It was like the arrival of a new child, a Bar Mitzvah or a wedding. They were so excited to get the Torah,” Levy said.

They took the Pine Bluff cover off the scroll and put on the one they had been using on the previous Torah, which they immediately prepared for shipping back.

The actual dedication took place at the morning service on Feb. 25. During the service, Goldstein spoke of living the Torah, not just having it in the ark.

When there are guests, congregants who are fluent in English translate Spanish messages, and English messages, such as Goldstein’s remarks, are translated into Spanish.

Weinberg was struck by the passion among the congregants. Growing up in Pine Bluff, “it was pretty good,” but there was the occasional “stinging moment” of anti-Semitism. She said it was fascinating “to see people choosing to be Jewish in a Protestant evangelical country” like Guatemala. “These people just embrace Judaism like nothing I have ever seen,” she said.

Referring to their weekend guests, Orantes commented that “For us was an honor to have all of them to share this very, transcendental moment. Saying thanks is too short. But there is no other words to express: We just can say Toda Raba.”

Weinberg did the first reading from the Torah in Guatemala, and members of the congregation did the other readings, after which the Adat Israel officers were called up to officially accept the scroll. A celebratory lunch followed.

Adding to the weekend, Adat Israel had its first baby naming with the Torah, Zahava bat Tikva.

Weinberg, who generally does a Torah reading every few weeks in Atlanta, always prefers to do the first reading in tribute to her family’s heritage as Kohanim. Even though her father wasn’t that ritually observant, “he knew he was a Kohen.”

Doing that aliyah meant she was the first one to read from the Torah in Guatemala, but she was more focused on the fulfillment of a long-time dream to chant Torah in a Spanish-speaking country.

At last summer’s deconsecration, she saw in the program that the Torah would be going to Guatemala, so she told Levy she was going to the dedication. Levy told her “if you’re going, I’m going.”

When she was a teen, her sister applied for the American Institute for Foreign Study. Her first choice of Austria was full, so she went to her second choice, Spain. When their father pointed out that there was a discount for a sibling to attend, Weinberg decided to go, though “I had taken only one year of Spanish.”

During the program, she discovered “this profound connection to Spain” and ended up majoring in Spanish at Newcomb College at Tulane, as well as doing a year abroad in Madrid.

“A certified Daughter of the Confederacy,” she married a kosher-keeping guy from Brooklyn. Her mother-in-law was surprised at her love for Spain, given the history of Jews in Spain. “All I knew is I loved it and felt a strong connection.”

A few years ago, she had her genetic profile done, and her mother’s side showed connections to the Iberian peninsula.

Weinberg started chanting Torah after being paralyzed in a car wreck 18 years ago, crediting her years of competitive tennis, including on the women’s team at Tulane, for building up her muscles to be able to come back from it.

She had a “burning desire” to chant Torah in a Spanish-speaking country to show that “Iberia belonged to us too. It was part of our story.”

Ten years ago she was supposed to fulfill that dream on a congregational trip to Honduras with Or Hadash of Atlanta, but she had to cancel when her mother was ill.

Being able to chant in Guatemala was “like closing a circle for me,” especially doing it from a Torah that had been at the congregation for three generations of her family.

At the Shabbat evening service, it also suddenly occurred to her that on the secular calendar it was the one-year anniversary of her father’s passing. Her mother had died four months after that, three days before the ceremony in Pine Bluff. “That was extremely powerful,” she said.

It was also an emotional time for Levy, for a different reason. A couple of days before the trip, his four-year-old grandson in California was diagnosed with lymphoma. After Shabbat, he cut short the visit so he could be with family. His grandson left the hospital after about three weeks.

Reflecting on Anshe Emeth’s legacy, Levy said “Even though the congregation is closed, the Torah lives on in Guatemala.”