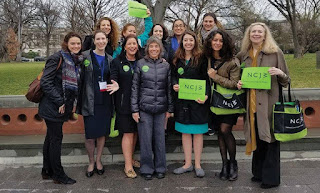 A traditional Jewish expression of good wishes is “until 120,” that one may merit a life of as many years as Moses lived.

This month, the Greater New Orleans Section of the National Council of Jewish Women is turning 120, with an eye toward serving the community for at least another 120 years.

The Section will celebrate 120 years of service, social justice and advocacy at “A Dozen Decade of Dedicated Service,” an anniversary dinner and dance on April 22 at the Metairie Country Club, starting at 7 p.m. Angela Hill, who became the first female news anchor at WWL-TV in 1975, will emcee the seated dinner, with music by the Yat Pack and a silent auction.

A patron’s party will start at 6 p.m. and feature Rhodes Spedale and Live Jazz Group.

The evening will honor the Section’s achievements through the decades, and the women who have led the organization.

The New Orleans Section has been important on the national stage, originating an evening group and providing three national presidents — Ida Friend from 1926 to 1932, Gladys Cahn from 1955 to 1959 and Joan Bronk from 1990 to 1993.

Nationally, NCJW was formed during the Chicago World’s Fair. Hannah Solomon of Chicago was asked to organize the participation of Jewish women at the Parliament of World Religions, an attempt at global interfaith dialogue, in conjunction with the World’s Fair.

Solomon and her volunteers soon discovered that the women’s “participation” would be serving coffee and other hostess duties, so they walked out. Building on her history of volunteer work and social action, by the end of the fair the women had established NCJW “to do work on behalf of women, children and families, said Dana Shepard, who was president of the New Orleans Section in the 1990s.

Solomon “approached women around the country to form Sections in their communities, and in 1897 we were one of the very early Sections to develop,” she said.

A group of 17 women established the New Orleans Section, with Hattie Wolff as the first president. Their first initiatives were giving housekeeping lessons to immigrants through the Kitchen Garden. In 1903, the garden evolved into the Industrial School for Girls, becoming the Young Women’s Hebrew Association in 1915.

A Sabbath School was established for those unaffiliated with a synagogue, and teachers were provided to help immigrants learn English.

In 1903, the Section awarded its first scholarships to promising Jewish students, establishing a program that continues to this day as the Irma Isaacson Scholarship Fund. Shepard said those scholarships were things like $5 toward attending typing school or sewing classes. “Those were the things that were important at the time.” Today, the funds help local students attend college, and there is also a book fund.

Funds continue to be established, recently one was named the Sara Stone Fund, in honor of Stone’s 100th birthday. Stone was Section president in 1951 and 1952.

During World War II, the Section established Teen Town, to help with rising juvenile delinquency during the war. The need was recognized, and the initiative led to the formation of New Orleans Recreation Development.

After World War II, NCJW volunteers were at the Port of New Orleans to greet immigrants from Europe, feeding them and transporting them to their new destinations.

Many years later, Stone was at a national NCJW conference when she was approached by a young woman who said she was two months old when her family arrived, and that her mother had repeatedly told the story of how they were helped by NCJW in New Orleans.

Opportunities for seniors and children have always been a priority. Magic Land was a cultural enrichment program for disadvantaged preschoolers and was a forerunner to Head Start, which began in 1966.

The Section has also been involved with the New Orleans Museum of Art, Crisis Care Center and the Zoomobile.

Loel Samuel, who was president from 2000 to 2002, said the Section is especially proud of its advocacy work. In 1914, the women were urged to write the Louisiana Legislature, promoting the establishment of a “home for incurables.”

Samuel said “we are not writing letters as much as we are doing emails, but we are still doing advocacy.”

Schornstein said the group has been “front and center” on equal rights legislation. “We were in Baton Rouge, we were in Washington, in New York, in New Orleans,” wherever they needed to go, and “we were very effective.”

The group’s mission is to “strive for social justice by improving the quality of life for women, children and families, and by safeguarding individual rights and freedoms.”

Greenberg said as a non-profit, the group “is not allowed to support candidates, but we can take a stand and advocate.”

Flo Schornstein became president in 1968, when civil rights was the primary avenue of involvement. “Our Section was very involved in the leadership of the civil rights movement,” and it was there that many of them met and worked with members of the African-American community for the first time, developing relationships that endure.

They worked on the integration of schools that had been whites-only. “That was a major undertaking, and it was a courageous undertaking,” Schornstein said. She recalls a meeting in a home where all the lights were off and their presence had to be a secret “for our own safety.”

But Schornstein said it was important for them to show their children “that their parents were on the right side of things.”

Her experience leading NCJW led to her involvement in the community after her term, because she had been exposed to so many opportunities in the community. “All the successes I’ve had since derive from that,” she said.

The Section also partners with the New Orleans Jewish Community Center on Alzheimer’s Care and Enrichment.

One of the most visible programs is Fox 8 Defenders on WVUE-TV. Established by Babs Isaacson in 1995, it started at WDSU-TV (Channel 6) as “6 On Your Side Problem Solvers.”

About a dozen volunteers from NCJW take phone calls on Mondays through Wednesdays from individuals who run into consumer problems they can’t solve themselves. Through contacts with groups like the Better Business Bureau, City Hall and Entergy, they endeavor to solve the problems, some of which “go away” when the television news gets involved.

After Katrina, the Problem Solvers had plenty to do. A recent push for the Defenders has been preventing contractor fraud following the tornado in New Orleans East.

In 2010, the program was discontinued by WDSU and Isaacson brought it to Fox 8, where anchor Lee Zurik had just moved from WWL-TV (Channel 4).

In 2011, Fox 8 Defenders received its first Emmy nomination for a story that evolved from a call to the hotline. In six years, Fox 8 Defenders fielded over 10,000 calls and saved consumers $2.5 million, and serves as a consumer education resource.

NCJW also partners with other organizations to coordinate televised candidate forums, such as mayoral debates. The Section also furnished the children’s area at the New Orleans Family Justice Center.

In 1987, New Orleans NCJW brought the Home Instruction Program for Preschool Youngsters to the city. Developed in 1969 at the NCJW Research Institute for Innovation in Education at Hebrew University, HIPPY is a home-based intervention program that was created for parents who aren’t confident in their own educational abilities to give their pre-school kids the necessary tools to succeed in school and later in life.

After NCJW introduced the program in New Orleans, the New Orleans School Board supported the program with funds and volunteer efforts. In 1988, HIPPY USA was established in Little Rock with major support from Hillary Clinton.

Samuel said the program is recognized by the state but is “in a transitional stage in Orleans Parish,” with hopes to reinvigorate it.

Television and education intersected early for NCJW, with “Magic Tree.” Storytelling Committee Chair Helene Baginsky started a storytelling program at the New Orleans Public Library in 1946. In 1951, she and the committee approached WDSU with the idea of turning it into a children’s television show, and “Magic Tree” began. In 1958, it became “Let’s Tell a Story” and was one of the first color shows on the station.

Joan Berenson, who received the Section’s Hannah Solomon Award in 2011, said her first volunteer job was through NCJW, at the Well Baby Clinic at Touro Infirmary, where her mother worked once a week. Later she folded bandages at the Red Cross headquarters and knit squares that would be sewn together as blankets for soldiers.

She said NCJW has a reputation “of getting things done, and done well.”

Schornstein echoed that, saying her presidency gave her a “remarkable understanding on how to run an organization.” Though the initiatives are run by volunteers, they are done professionally and with forethought and research. “Our standards remain high, our work remains professional.”

Over the years, the nature of volunteering has changed. In 1973, the Section started Moonlighters. “The world was changing” with a large proportion of women in the work force “and the pool was shrinking on who was available to do daytime volunteer work,” said Barbara Greenberg.

A group of women with careers started meeting in the evening, and Greenberg became the first president of the new Moonlighters group. “It gave us a social outlet and we met a lot of people.”

They would have a wide range of speakers, from Mildred Covert teaching how to make kugel, to a visit from Mayor Moon Landrieu.

She recalls working on Tay Sachs testing and helping with the resettlement of Jews from the Soviet Union. “I remember going to Lake Avenue where they were setting up apartments” for the newcomers.

“We were able to do things even though we worked,” Greenberg said, and within a year the Moonlighters had over 100 members. Much of the recent Section leadership has been from Moonlighter veterans.

The New Orleans group was the first Moonlighters in the country, so Greenberg went to Pensacola, communities in Georgia and elsewhere to tell them how to start similar groups.

Eventually, she said, “the whole Section was turning into Moonlighters” so it ceased functioning as a separate entity in 1999.

In 2013, the Section introduced a new program to develop future leadership, NCJW Way: Learning to Lead. A group of women who are new to NCJW are selected for the program, which is an intensive year-long leadership training seminar culminating in a trip to the national NCJW convention. Participants commit to a two-year board term on completion of the program.

Though the nature of volunteering has changed, the Section remains active, with about 900 members. Whatever form the volunteerism takes, there is still much to be done, they said.

Shepard said “the needs are still there to advocate for those who can’t speak for themselves.”

“The problems are still the problems, the solutions still require a great deal of work,” Schornstein said. “We must look to the future with a fresh and wondrous eye, meeting those community needs that fall within our mission; making it possible for women of today to participate while at the same time, maintaining the standards of excellence which have been NCJW’s hallmark.”

Greenberg added, “I’m proud that after 120 years we are still vibrant, giving to the community, fighting for rights.”

Samuel said “to be a past president with this group of women is something words can’t express.”