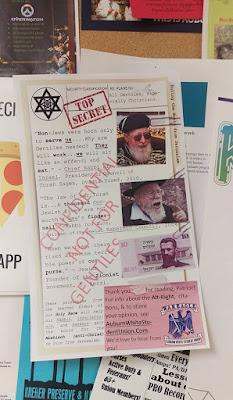 The so-called Auburn White Student Union initially used the acronym “WAR EAGLE,” standing for “Whites of the Alt-Right Empowering Auburn Gentiles for Liberation and Enlightenment.” The university said it is looking into trademark and copyright infringement violations, and soon after news of the group hit, the acronym was removed from the website and the site stated “this is not sponsored by Auburn University.”

Observers say the group likely isn’t even home-grown in Auburn, but part of a national movement to drum up “alt-right” or white nationalist sentiment on campuses. A report in the Auburn Villager says the anonymous organizer claims to be a 2016 Auburn graduate.

With that backdrop, Richard Spencer will be speaking at Auburn’s James Foy Hall on April 18 at 7 p.m. Spencer, head of the National Policy Institute, a white nationalist think-tank, was behind the recent troubles aimed at the Jewish community of Whitefish, Montana.

UPDATE: The Spencer talk was cancelled on April 14. In a statement, the university said “In consultation with law enforcement, Auburn canceled the Richard Spencer event scheduled for Tuesday evening based on legitimate concerns and credible evidence that it will jeopardize the safety of students, faculty, staff and visitors.”

Spencer said he is showing up anyway, bringing supporters and purchasing protective gear for all of them. He said his Auburn talk was going to be civilized, but now threatens that Auburn will regret cancelling that talk.

On April 18, a judge issued an injunction allowing the talk to proceed as planned.

In a Youtube announcement on April 12, Spencer originally said he will be speaking on “Trump and the Syria situation, the alt-right, identity, and I will certainly be taking questions from the audience.” He added that based on reaction to his previous talks, “it is going to be wild.”

According to Auburn University, Spencer was not invited by any campus group and reserved and is paying for the space as anyone can do. In the 1990s, Toney resident Robert Countess used the same method to have two prominent Holocaust deniers speak “at” the University of Alabama at Huntsville.

In a statement after Spencer first announced the speech, the university administration said “We strongly deplore his views, which run counter to those of this institution. While his event isn’t affiliated with the university, Auburn supports the constitutional right to free speech. We encourage the campus community to respond to speech they find objectionable with their own views in civil discourse and to do so with respect and inclusion.”

The Southern Poverty Law Center criticized Spencer but noted that “hate speech is free speech” and that he has a right to speak. The SPLC also said that Spencer is looking for confrontation and the resulting publicity, so students should ignore his appearance rather than protest.

According to the Auburn SPLC On Campus chapter, Spencer was able to secure the venue through a loophole in Auburn’s procedures that has since been closed.

Despite the cancellation, the SPLC on Campus chapter is still co-hosting a previously scheduled event, “AUTogether: Hashing It Out,” at 6:30 p.m. in Lowder Hall room 125a. According to the group, “We will engage in dialogue about issues raised at the town hall centered around the current campus and political climate, and through this dialogue, we hope students find support in each other.”

Similarly, when one of the Holocaust deniers was at UAH in the 1990s, a simultaneous screening of “Schindler’s List” far outdrew the denier, and the only visible protest was two non-Jewish students distributing educational flyers outside the venue.

The group placing the anti-Jewish flyers at Auburn has a website registered through RespectMyPrivacy LLC in Lake Mary, Fla., with the address of a shared office rental facility in the town just north of Orlando. The site was registered on April 2.

Bobby Woodard, vice president for student affairs and associate provost, told the Auburn Plainsman that “We do know that the same type of flyers went up today at the University of Georgia and my understanding is that there have possibly been sightings of them at the University of Alabama as well.”

Auburn University, in its Twitter feed, said “This group isn’t an Auburn student org & we find the views expressed in their materials reprehensible & unrepresentative of the university.”

The Auburn chapter of SPLC On Campus held a pre-planned AU Together town hall on April 11, where the flyers were a topic of conversation.

At the forum, Taffye Clayton, vice president and associate provost of Auburn, said “It’s very important we have an awareness around it, have a sense of what is happening, then be clear about how we will respond institutionally. I think some of that has been done but it’s still more to do.”

The Auburn Hillel Seder on April 12 had increased security. It also had increased turnout, as there were about 80 reservations but over 100 showed up.

While the white student group is intended as a place for whites, according to the website the group “will be happy to engage in dialogue with people of other ethnicities, people of mixed race, and White liberals who acknowledge our rights to peacefully exist as White people with a White future but personally don’t want a part of it. In addition, we expect to be able to find common ground with secular Arabs who oppose Zionism and Islamism; Hindus who oppose Islamism; Black people who are horrified by ghetto ‘culture’; and Asian-Americans who have been victimized by diversity shakedowns.”

The site states that those with “small amounts of non-White ancestry” would be considered for membership “on a case-by-case basis,” especially those with “evolved high IQs.” Jews, though, “are encouraged to consider Auxiliary Membership, since we are (sadly) forced to take special precautions to prevent infiltration the way neocons ruined conservatism.”

The site does distinguish regionally, stating that Southern Jews “were historically much less radically-leftist than Jews from Eastern Europe [who tended to settle in NYC and LA], though this difference has been diluted in the past 50 years as the Holocaust has become the central tenet of Jewish identity, even among Southern Jews.”

The website starts with a column about “The True Story of a Sinister, Secret Holiday,” showing President George H.W. Bush “obediently” signing a proclamation about the Noahide Laws, which the site mischaracterizes as instruments of Jewish supremacy. The proclamations are part of Education Day, which honors Rabbi Menachem Mendel Schneerson, who was the rebbe of Chabad.

“Here at the Auburn White Student Union, we will never submit to Jewish supremacists like Scheerson (sic), nor to anti-Christ Noahide Laws,” the site says.

The site also lashes out at “wars for Israel,” such as the “useless Iraq war,” “criminal bankers… a disproportionate number of whom are Jewish,” Hollywood, “mandatory lessons about only one genocide in history,” and those who ignore purported “Jewish-Communist ordered” atrocities.

In listing Auburn ethnic organizations, the group references Auburn Hillel and Jewish Student Organization, “whose page, by the way, shows only an Israeli flag — they make no pretense of loyalty to the US.”

They claim “we have nothing at all against any of these groups,” adding, “except for the blatantly treasonous behavior of Hillel, as noted above.”