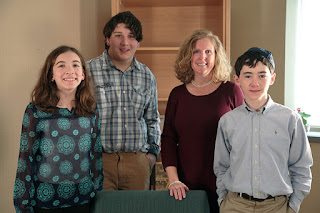 “Better Together Names, Not Numbers,” a project at Birmingham’s N.E. Miles Jewish Day School, will have its debut screening on May 2 at 6:30 p.m. at Homewood Public Library.

The Better Together Names Not Numbers project is an interactive multi-media Holocaust project created by educator Tova Fish-Rosenberg of Yeshiva University.

The Day School was selected to participate in the year-long program about Holocaust history and the stories of local families affected by the Holocaust.

The project culminates with two student-produced films. “Names Not Numbers” consists of hour-long interviews of local survivors Max Herzel and Robert May, and of two second generation survivors, Sheryl Perlstein, the daughter of the late Aisic Hirsch, and Jessica Roskin, daughter of Ingrid Roskin.

The interviews are preserved and archived at The National Library of Israel in Jerusalem; Yad Vashem; Yeshiva University’s Mendel Gottesman Library and at Holocaust Museums in the U.S. The interviews are distilled into 15-minute segments for the screening.

The second film, “Names Not Numbers: A Movie in the Making” documents the work in progress.

New York filmmaker Saul Sudin brought the skills of filmmaking to life, as he instructed the students in using the camera and digital editing equipment.

Noah Hagedorn, a sixth-grade student, said “my generation should realize from this that what happened in the past affects what happens now, and what will happen in the future… it is a thing to be remembered so that it shall never, ever happen again.”

Seventh-grader Sofia Sigman reflected that “people don’t live forever but their stories can.”

Nationally, the Better Together Names Not Numbers program is generously supported by a prominent national foundation. Locally, support came from the Abroms Center for Lifetime Learning, BHEC, the Birmingham Jewish Foundation, the State of Alabama Holocaust Commission and the Homewood Public Library.