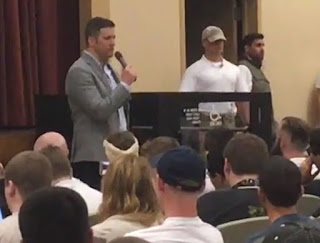 In the end, everybody had their say and went away.

After several days of conflict and concern over an announced speech by white nationalist Richard Spencer at Auburn University on April 18, a court ruling cleared the way for the speech to go on as planned, hundreds demonstrated and the evening was, for the most part, peaceful, if a bit loud on occasion.

Though many news reports trumpeted “violence” breaking out near the talk, there was only one incident, where three men who were not Auburn students or from the Auburn area were arrested for disorderly conduct after the evening’s only altercation. One was from Montgomery and two were from the Birmingham area.

Auburn Police Chief Paul Register told the Auburn Plainsman he was “pretty happy with the way things have gone. It could have been a lot worse. I attribute the peaceful nature to the students.”

There had been concerns about violence, especially because Spencer was bringing some of his supporters, and anti-fascist groups from outside the Auburn area were also coming in to take a stand against him.

The saga began around April 6, when flyers from a so-called Auburn White Student Union started appearing around campus. The flyers purported to reveal Jewish control of non-Jews through the Noahide laws and alluded to Jewish supremacism.

The group initially used the acronym “WAR EAGLE,” standing for “Whites of the Alt-Right Empowering Auburn Gentiles for Liberation and Enlightenment.” After the university condemned the flyers and spoke of trademark infringement, the group removed the acronym from its website and added a disclaimer that it was not affiliated with Auburn University.

Some speculated the group wasn’t even local, and may have had something to do with Spencer. That sentiment was strengthened when Spencer issued a Youtube video on April 12, saying he would speak at Auburn on April 18.

As tensions grew, Auburn Hillel, the Anti-Defamation League and Southern Poverty Law Center advised Jewish students to participate in events elsewhere and stay away from Spencer and his followers.

Security was increased at Auburn’s only synagogue, Beth Shalom, and around campus. The community Passover Seder was held on campus just hours after Spencer’s initial announcement on April 12. The Seder had 80 reservations but 110 showed up, which many attributed as a desire to come together in the face of the flyers and the pending talk.

The room in Foy Hall for the April 18 talk was reserved for $700 plus security expenses. Shortly after the announcement was made of Spencer’s speech, the university closed the loophole by which the reservation was made.

While the university initially spoke of freedom of expression while condemning Spencer, on April 14 the university cancelled the talk, “in consultation with law enforcement… based on legitimate concerns and credible evidence that it will jeopardize the safety of students, faculty, staff and visitors.”

Spencer responded by saying he would show up anyway, and Auburn would “rue the day” some “cowardly bureaucrats” made that decision.

Cameron Padgett of Atlanta, who originally booked the venue, filed a motion in Federal court on April 17, seeking to force Auburn to allow the speech.

Arguing the case was Sam Dickson, an Atlanta attorney who spoke before Spencer’s speech on April 18, saying that “diversity is a curse. It is not a blessing, it is not a strength.”

An Atlanta attorney, Dickson has routinely defended the Georgia Ku Klux Klan and other white supremacists. In 1978 he ran for lieutenant governor on a segregationist platform.

A 2006 profile of Dickson in SPLC’s Intelligence Report stated Dickson is a “real estate prospector” who would badger individuals in Atlanta, usually black, who had property tax liens to sell their properties to him for pennies on the dollar, something known in the trade as “bullying title.” One Atlanta real estate expert referred to him as “the terrorist of the Atlanta real estate community.”

Dickson has also been on the editorial board of the Holocaust denial publication “The Barnes Review.”

Judge W. Keith Watkins of United States District Court in Montgomery ruled early in the afternoon that the university did not offer proof that Spencer advocated violence, so the speech must be allowed.

Shortly after the ruling, Timothy R. Boosinger, provost and vice president for academic affairs, and Taffye Benson Clayton, associate provost and vice president for inclusion and diversity, issued a statement to the “Auburn Family,” saying “Whether it’s offensive rhetoric, offensive flyers around campus, or inappropriate remarks on social media, we will not allow the efforts of individuals or groups to undermine Auburn’s core values of inclusion and diversity and challenge the ideals personified by the Auburn Creed.”

They added that “It is now more important than ever that we respond in a way that is peaceful, respectful, and maintains civil discourse.”

Spencer called the ruling “an amazing victory” and that the event in Auburn “will have echoes around the world.”

Several activities were planned at the same time to draw people away from the area where Spencer spoke. A quickly-organized AuburnUnites Music Fest was held on the Green Space, drawing hundreds of students.

The Auburn chapter of the Southern Poverty Law Center on Campus held a previously-scheduled dialogue, AUTogether Hashing it Out.

At Spencer’s talk, the first few rows were filled with fans of Spencer, almost exclusively white men above college age, who often gave him standing ovations. The back two-thirds of the room consisted mostly of a diverse mix of students, who were not nearly as enthusiastic and generally registered their disapproval with an occasional sarcastic comment.

As Spencer entered, it was unclear whether some supporters were saying “Hail Victory” or “Heil Victory.”

In the video announcement, Spencer said he would discuss President Trump and the Syria situation, though neither was mentioned on April 18. Instead, he spoke of how whites are the only group not allowed to celebrate their own identity.

Credited with coining the term alt-right, Spencer explained what it means and what it does not.

“The alt-right is about identity, period, end of story,” Spencer said, “being European in the 21st century.”

When a student called out that Spencer’s movement was about hatred, Spencer responded, “try to be a little more creative.”

He then added, “even if white people were inferior in every way, I still would fight for my people.”

Spencer said “we don’t have a black problem, we don’t have a Jewish problem or a Hispanic problem. We have a white problem” of self-hatred. He asserted that it is more difficult to be white today than to be black.

One student challenged him on his assertion of the difficulty of being white, asking “How are white people more racially oppressed than black people? Because I’m a black woman at a predominantly white institution and I want to know what challenges y’all face that I don’t?”

Spencer spoke admiringly of the connection blacks have to each other through a common narrative, saying whites aren’t allowed to have such an identity in society. Instead, things like patriotism, capitalism and a worship of freedom are substituted as a form of identity to fill a hole within.

Citing things like the displacement of Native Americans, the Holocaust and colonialism, he said there is an eternal “black cloud” hovering over whites, “this eternal guilt trip preventing us from being who we are.”

He quickly added that “the white race has sinned” and he is “willing to own slavery… the terrible things the white race has done against other races and to other whites.”
Ultimately, he said, different races “need different countries. We need our own ways in life.” He said diversity makes the world ugly, and is “a way of bringing to an end a nation and a culture that was defined by white people.”

The biggest negative reaction came from his attacking football.

He disdained how Auburn watered down its standing and history as a white institution, especially through admitting black athletes, who he said are “not the greatest exemplars of the African race” and alluded to sexual violence against white women. That comment, which was a view prevalent during the days of segregation, was ill-received by the students in the room.

The “Southern football identity” is “covering up some hole in ourselves,” he said, and if it were up to him, he would end football because it is a substitute for “an identity that has been declared illegal.”

The talk lasted about 40 minutes, the question and answer session was much longer. A wide range of students calmly asked their questions, some of which Spencer dismissed as “boring.”

Born in Boston, Spencer grew up in Dallas. He currently heads the white nationalist National Policy Institute and extreme-right websites.

In 2014 he tried to organize a white nationalist conference in Hungary, which got him kicked out of the country and banned from 26 European countries for three years.

At a conference in Washington in November, he received national attention when audience members gave a Nazi salute during his talk, something he ascribed to their exuberance. He received further publicity on January 20 while in Washington for President Trump’s inauguration. On a Washington street, a man punched him in the face, and the video went viral.

In February, he was kicked out of the Conservative Political Action Conference, where attendees found him “repugnant.”

His family currently lives in Whitefish, Mont. After the town issued a resolution denouncing hate, Spencer supporters started a “trolling” campaign, specifically targeting the small Jewish community of Whitefish. A neo-Nazi march was threatened but postponed.

Spencer’s parents, in a December open letter to Whitefish, said “We are not racists. We have never been racists. We do not endorse the idea of white nationalism.” Since Spencer is an adult with views they can not control, “we feel we are not part of the story, nor do we wish to be a part of this story.”

On April 18, the SPLC filed a Federal suit against Andrew Anglin, founder of the neo-Nazi Daily Stormer website, for specifically targeting and harassing Tanya Gersh, a Jewish real estate agent in Whitefish, and her family. They have received over 700 harassing messages since December.

Spencer’s family also has Louisiana ties, as his grandfather was a prominent doctor in Monroe.

The Spencers own thousands of acres through Dickenhorst Farms and other companies in East Carroll, Madison and Tensas Parishes in northeast Louisiana, along the Mississippi River. From 2004 to 2014, they received $940,000 in USDA subsidies payments for Dickenhorst alone.

In 2008, his mother was listed as having a 90 percent stake in the properties, while Spencer and his sister each have 5 percent shares.