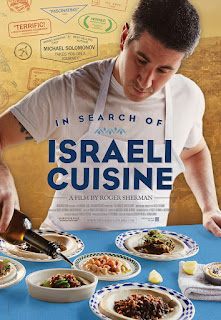 “In Search of Israeli Cuisine” will screen at the Uptown JCC in New Orleans on May 1.

Several events in the region will mark Israel’s 69th birthday.

The event will include Israeli dancing and music, Israeli street food, a Junior Maccabi event, crafts, a bounce house and more. The event is free, food will be available for purchase.

Huntsville’s community celebration will be on May 7 from 11 a.m. to 2 p.m. at Temple B’nai Sholom, with a picnic lunch at noon. There will be children’s activities, and Israeli Air Force Major Lior Zukerman will speak.

There will also be a Huntsville Celebrates Israel event at The Rock Family Worship Center on May 7 at 6 p.m.

The Jewish Federation of Central Alabama will have IsraelFest 69 in celebration of Israel’s birthday, April 30 from 5 to 8 p.m. at the Wynlakes Golf and Country Club in Montgomery. There will be Middle Eastern food, a salute to leaders for their dedication to Israel, crafts, raffle, a Western Wall replica and more.

Guest performer will be comedian Joel Chasnoff, a former Israel Defense Forces combat soldier and author of the comedic memoir “The 188th Crybaby Brigade,” about his service in the IDF.

In Mobile, the community Israel Independence Day celebration will be on April 30 from 2 to 7 p.m. at Springhill Avenue Temple.

There will be kosher Israeli food, music, a bounce castle, face painting, art, a photo booth, Israeli trivia and more.

Annabelle Gurwitch, author of “Wherever You Go, There They Are,” will give a presentation at 4:30 p.m. She grew up in Mobile and her book draws on her Mobile experiences.

The annual Jewish Food and Cultural Festival at War Memorial Stadium in Little Rock will also be an Israel Independence Day celebration. The festival runs from 9 a.m. to 4 p.m. and draws thousands each year.

As part of the event, Israeli author Dorit Rabinyan will speak on “Food’s Joys and Labors” at the main stage, starting at 10:45 a.m. Her appearance is jointly sponsored by the Arkansas Literary Festival and the Consulate General of Israel in Houston.

There will be booths on Jewish and Israeli culture, the popular Ask the Rabbi booth, a Western Wall replica, entertainment, artists and more.

In Baton Rouge, Beth Shalom’s Jewish Journeys will have an Israel celebration and Havdalah, May 6 at 4 p.m. The event includes a pool party and barbecue, and educational activities about Israel.

On May 1, the New Orleans Jewish community will have its annual Israel Memorial Day and Independence Day event, to honor the fallen and then celebrate independence with the flavors of Israel and a screening of the film “In Search of Israeli Cuisine.”

“In Search of Israeli Cuisine” is a portrait of the Israeli people told through food. It puts a face on the culture of Israel, profiling chefs, home cooks, vintners, and cheese-makers drawn from the more than 100 cultures that make up Israel today — Jewish, Arab, Muslim, Christian, Druze. While exploring the country’s dynamic food scene, a rich and human story of the people emerges. A light snack of various Israeli foods will be served.

The evening begins at 6:30 p.m. in the Uptown Jewish Community Center’s Grant Board Room with a Yom HaZikaron ceremony led by the Jewish Clergy Council of New Orleans. It then moves to the Mintz Auditorium for the film screening.

The final event in the Cathy and Morris Bart Jewish Cultural Arts Series, the Israel Independence Day Celebration is free and open to the community.

In November 1947, the U.N. voted 33 to 13 for the establishment of Israel. At the May 2 event, JCDS students will re-enact the vote. Each child will represent a country and, one by one, cast their vote.

The school also is looking for Israel artifacts so they can have an Israel museum. Community members are asked to loan an Israel-related family artifact — whether an item, a photo or a memory. Items may be dropped off at the school, with a card describing the item and its significance. During the event, there will be self-guided tours to show how the Israel experience affects individuals in New Orleans.

The Grandparents and Special Friends day is open to the community and will include an Israeli feast, singing and dancing. It will be from 10 a.m. to 12:30 p.m.