The Rock hosting Huntsville Celebrates Israel on May 7 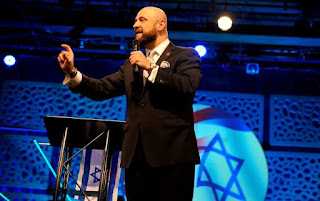 Eagles’ Wings, a New York-based pro-Israel Christian group, is coordinating Huntsville Celebrates Israel, “a Christian expression of love and support for Israel and the Jewish people” on May 7 at The Rock Family Worship Center.

According to the group, “Christians from around the Huntsville region will gather together at The Rock to declare that Israel and the Jewish people are not alone and that Christians will not remain silent as Israel is threatened.”

The program will include Rev. Robert Stearns, founder of Eagles’ Wings, and leaders from the Christian and Jewish communities. A kosher reception will follow.

Rabbi Pini Dunner of the modern Orthodox Beverly Hills Synagogue will also speak. A London native, he is the grandson of the last chief rabbi of East Prussia. In 1991, he was assistant rabbi at the Moscow Choral Synagogue.

In 2011 he became a faculty member at Yeshiva University High Schools of Los Angeles, and in 2013 was recognized by AIPAC as “Ally of the Year.” In 2014 he was appointed senior rabbi at Beverly Hills.

In March, Stearns co-hosted a conference in New York on Christian support for Israel, in cooperation with CAMERA: The Committee for Accuracy in Middle East Reporting in America.

Stearns started Eagles’ Wings after living in Jerusalem in the early 1990s, contemplating the connection between his Christian faith and historic Judaism. He started on a path of “greater spiritual authenticity” for himself and advocating it for the church.

Stearns also launched The Day of Prayer for the Peace of Jerusalem in 2003, which is now observed every year on the first Sunday in October by millions of Christians in more than 175 nations.

The Huntsville event is open to the community and will begin at 6 p.m., doors will open at 5 p.m.