Not really a nurse: Marthe Cohn spied against Nazi Germany 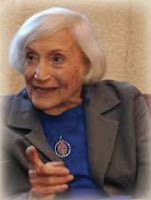 In September 2015, Marthe Cohn’s talk in Metairie, “Behind Enemy Lines: The True Story of a French Jewish Spy in Nazi Germany,” was very popular.

This month, she returns to the region for a May 10 talk in Baton Rouge, and when Chabad in Metairie found out she would be in the area, “we said we must have her speak again” in Metairie, Rabbi Mendel Ceitlin said. “She was amazing when she spoke here in 2015.”

Coordinated by Chabad of Baton Rouge, Cohn will speak on May 10 at 7 p.m. at the Arts Council of Baton Rouge. Tickets are $20 and include a dessert buffet. VIP tickets of $180 include a signed copy of her book and two VIP seats. Sponsorships are $360.

Now 97, Cohn lives in California and travels the world telling a story that stunned her family when she was honored at age 80 with France’s highest military honor, the Medaille Militaire.

During World War II, she posed as a German nurse named Marthe, running around Europe desperately looking for her missing fiancé and asking Nazi soldiers for assistance.

Little did they know that she was actually a devout Jew from France, wasn’t a nurse and the fiancé did not exist — she was a spy using that cover story to travel the countryside and approach troops sympathetic to her “plight.” Through that, she obtained critical information for the Allied commanders.

She was born in Metz, France, near the German border. As the Nazi occupation escalated, her sister was sent to Auschwitz while her family fled to the South of France.

Cohn chose to fight back, and joined the intelligence service of the First French Army, using her perfect German accent and Aryan appearance.

As of April 16, there were only 50 seats left for her talk in Baton Rouge.