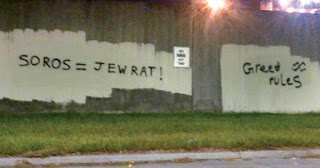 Anti-Semitic incidents surged by more than one-third in 2016, and are already up by 86 percent in the first quarter of 2017, according to the annual Audit of Anti-Semitic Incidents from the Anti-Defamation League.

ADL reported a “massive increase” in harassment of American Jews, especially since November, and a doubling in the amount of anti-Semitic bullying and vandalism at non-denominational K-12 grade schools.

In 2016, there were 1,266 acts targeting Jews and Jewish institutions, a 34 percent increase over 2015. Nearly 30 percent of these incidents occurred in November and December.

During the first three months of 2017, there were already 541 reported incidents. Each of the JCC bomb threats counts as an incident, but even taking those out of the count, the number is still much higher.

Shelley Rose, interim regional director of the ADL Southeast region in Atlanta, said there were four incidents in Alabama in 2016. The words “Hitler did nothin’ wrong” were painted in purple outside of a teacher’s classroom, and someone broke several panes of a stained glass window at Temple Beth-El in Anniston, also bending the frame. Alabama had two harassment incidents in 2015.

Rose noted that Alabama already has four incidents in the first quarter of 2017, but all four were the bomb threats phoned in to the Levite Jewish Community Center and N.E. Miles Jewish Day School in Birmingham.

The second quarter in Alabama, though, is already off and running, with the recent anti-Semitic flyers at Auburn University, and the painting of a swastika on the door of a non-Jewish lawyer’s office in downtown Huntsville on April 21.

Incidents in Louisiana are on the upswing after two years with three anti-Semitic incidents per year.

“There’s been a significant, sustained increase in anti-Semitic activity since the start of 2016 and what’s most concerning is the fact that the numbers have accelerated over the past five months,” said ADL South-Central Regional Director Allison Padilla-Goodman in New Orleans. “It is also troubling that in Louisiana specifically, we have seen a spiked increase in the number of harassment incidents in the first quarter of 2017.”

In the first quarter of 2017, there have been five reported incidents of anti-Semitic harassment, compared to three during all of 2015. The three reported anti-Semitic incidents in 2016 in Louisiana were all vandalism, including prominent anti-Semitic graffiti along a high-traffic area of Tchoupitoulas Street in November 2016.

With that and the recent bomb threat to the Jewish Community Center, Padilla-Goodman said “the Jewish community is on high alert. Clearly, we have work to do and need to bring more urgency to the fight. At ADL, we will use every resource available to put a stop to anti-Semitism and we will be drawing on the strength of our coalitions and partnerships.”

Incidents on college campuses remained mostly flat, but anti-Semitic incidents at non-Jewish elementary, middle, and high schools increased 106 percent, from 114 in 2015 to 235 in 2016. This increase accelerated in the first three months of 2017, when 95 incidents were reported.

While harassment and vandalism have increased sharply, physical assaults are down significantly, with 36 nationally all of last year, and just six in the first three months of 2017.