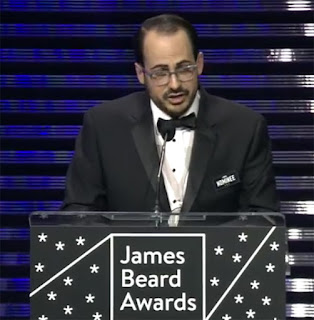 The streak continued for the team at New Orleans’ noted Israeli restaurant, Shaya, at the James Beard Awards on May 1.

The award is presented to “a chef age 30 or younger who displays an impressive talent and who is likely to make a significant impact on the industry in years to come.”

Engel grew up in Orlando, the son of a rabbi. While attending Tulane, he decided to become a chef, cooking at Tulane Hillel. As a senior, he worked as a pastry assistant at Domenica, which Shaya led.

After graduating in 2010, he worked for long-time friend Michael Solomonov at Zahav in Philadelphia, and spent some time at Catit Restaurant in Tel Aviv.

By coincidence, one of the other four nominees for Rising Star Chef was Camille Cogswell, pastry chef at Zahav, while Solomonov took home the national Outstanding Chef award.

He returned to New Orleans after a stint in northern California, working at Gautreau’s. He had the idea of starting an Israeli restaurant in New Orleans, but instead, he became part of the team opening Shaya in late 2014.

Last April, Engel was part of a Partnership2Gether trip to Israel with the Jewish Federation of Greater New Orleans. The mission, celebrating the 20th anniversary of Partnership2Gether, started with all 43 communities from around the world visiting New Orleans’ partner community, Rosh Ha’Ayin, for a New Orleans-style party. Engel and Chris Lusk were the chefs for the event, and over the next week they taught seminars in Rosh Ha’Ayin and experienced Israeli cuisine.

They also had home hospitality in Rosh Ha’Ayin, where Engel learned more traditional Yemenite specialties to bring back to Shaya.

Dave Hardie, director of gastronomy for San Pellegrino, which sponsors the award, made the presentation to Engel.

“To everyone in New Orleans, you’ve been the perfect audience for us to tell this brand new story of Israeli food down in the South,” Engel said. “I’m so grateful you guys have been so open to it.”

He thanked the “incredible team at Shaya… they are the rising stars today.” To Shaya, he said “you took me in and you showed me how to cook in a way that makes people feel the pure joy of warm hospitality.”

He thanked his parents, who were in attendance, and his wife Meredith. “Six years ago on a trip to Israel, you fell in love with a nerdy know it all line cook with big dreams,” he said.

Engel wasn’t the only member of New Orleans’ Jewish community to be nominated. Neal Bodenheimer’s cocktail bar Cure, which he opened in 2009, was a finalist for Outstanding Bar Program, but the award went to another New Orleans institution — Arnaud’s French 75 Bar.