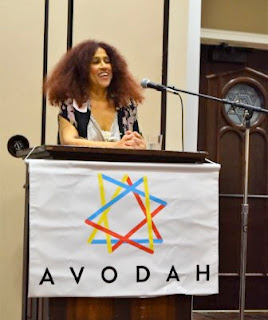 Deborah Cotton was honored by Avodah on April 23

She may have lived in New Orleans for just 12 years, but when word came of Deborah Cotton’s death on May 2, her life was celebrated as a New Orleans original.

Cotton was one of 19 people injured during a shooting at the 2013 Mother’s Day parade of the Original Big 7 Social Aid and Pleasure Club. She died on May 2 after dealing with complications from the shooting for four years, requiring 30 surgeries.

Just over a week before she died, she was honored as a Partner in Justice by Avodah, in an April 23 ceremony at Temple Sinai. She had been hospitalized before the event, collapsed soon after and was hospitalized again until she died.

A native of Texas and Oklahoma, Cotton attended San Francisco State University, then was a union organizer in Los Angeles. She moved to New Orleans in June 2005, going to Texas during Katrina but returning quickly to help rebuild the city.

The child of a Jewish mother and black father, she set out to document the underreported parts of New Orleans. She wrote under the name Big Red Cotton, and said it was “strange and ironic” that second-line parades and other aspects of black culture that are so integral to New Orleans were underreported or completely ignored.

“No one was publicizing second line parades,” she said. “These things happen every Sunday for four hours.”

Cotton said her two cultures “give me my fortitude, my gasoline, my perspective.”

In 2009, she started writing for Gambit, and at the Avodah event she said “they gave me the keys to the car and said write what you want.”

She published second line routes and videos, and it quickly became one of the site’s highest-trafficked pages. Gambit noted “she was the first journalist to take on second-line culture as a beat.”

She also smoothed the sometime contentious relations between the second-liners and local officials.

She was covering the 2013 parade for Gambit when Akein Scott and Shawn Scott opened fire on the crowd.

“I was filming the parade, moving around with the band,” she said. “I looked over and saw one of the main shooters. Everyone else was running.”

She said the shooter she saw “reminded me of my nephew. My gut instinct was to run over and stop him, take the gun, run with him.”

After it was over, “the irony was I was the worst injured of the 19,” she said.

Cotton was shot in the stomach, and the bullet went through internal organs. She lost a kidney, her gall bladder and half of her stomach, and was in the hospital for a couple of months, three weeks in intensive care with 11 surgeries. She was struck in an area that surgeons call the “soul hole” because it is rare to survive an injury there.

Her feelings for the shooters was “sorrow.”

“I thought, this boy hasn’t even started life yet. And he’s already ended his life” because he would likely be going to jail for life.

She began to speak out, and “people were stumped that I would actually feel compassion” toward the shooters. When it came time to give the victim impact statement, she emphasized that “I am not a victim, I am a survivor.”

She also stipulated that “I want to be able to say to them what I want to say.”

Her message to them was “I don’t know what happened to you in your life… but I still love you. And I’m not talking fake love. I am going to be here for you.

“You weren’t born to shoot up a parade,” Cotton related. “You still have the capacity to do good, to make a difference, to change the world. Even from behind bars. And I’m going to be here to support you, to cheer you on.”

She said she and Akein Scott have been in contact with each other, and she said he simply was never given the opportunities to shine, having been born into a drug trafficking gang that was behind the shooting.

The sentence range was 20 years to life, and she urged the judge to give them the minimum so they would have a life, since she was the most badly injured yet she was still around. The judge imposed life sentences, which she was fighting. “I wanted those boys to have another opportunity at life.”

She told the Avodah crowd, “one of the Jewish tenets I live my life by is tikkun olam, and if I don’t do anything else before I leave here, I need to have made my presence felt and do what I can to repair the world.”

She speaks out for prison reform, noting “we finally got a new governor who has the cojones to put money behind reform,” and funding an organization supporting crime survivors and showing that “we deserve the support and a voice in sentencing.”

She blasted “bubblehead” Leon Cannizzaro, Orleans Parish District Attorney, “who thinks with his old school mentality” and “wants more bodies in jail,” and also arrests crime victims who do not cooperate with the prosecution.

On May 4, the New York Times published an essay she wrote against arresting crime victims who refuse to testify. That same day, the New Orleans City Council passed a resolution urging Cannizzaro to stop the practice, with Councilman Jason Williams reading parts of Cotton’s essay during discussion.

On May 2, there was a brass band tribute to Cotton at Tuba Fats Square in Treme.

Dani Levine, New Orleans Director of Avodah, said Cotton “is a titan who is deeply missed. An incredible role model and teacher and just all around real life embodiment of chesed.”

Cheryl Cook, national director of Avodah, said “Deb leaves behind a powerful legacy of forgiveness, strength, and an unwavering belief that one person can make a difference, no matter their circumstances. Her remarkable resilience and untiring commitment to creating a kinder world is a source of inspiration. There is no one we could have been more honored to recognize at our Partners in Justice event in the city she loved most.”

David Simon, producer of “Treme” on HBO, tweeted that “Even after the worst affront, Deb was as big-hearted, forgiving and joyful as the city and the culture she loved.”

A public memorial will be announced.