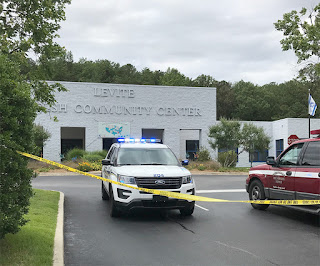 Emergency crews were called to Birmingham’s Levite Jewish Community Center around 1:30 p.m. today after a suspicious envelope was discovered. After on-site testing, it was determined the contents were not hazardous and an all-clear was issued just after 3 p.m.

In a message to members, LJCC Executive Director Betzy Lynch said the envelope was part of the regular mail delivered to the LJCC.

Lieutenant Sean Edwards, public information officer for the Birmingham Police Department, said a couple of LJCC staffers in the office had come into contact with the envelope, and “they saw some things that looked very suspicious.” An off-duty police officer took the envelope outside to his vehicle, and contacted the authorities.

Hazardous materials teams set up a decontamination tent and conducted tests on the envelope outside, and quarantined the area where it had been inside. Entry and exit were barred and preschool classes were kept in their rooms.

After the tests came up negative, movement was once again allowed on the campus.

Edwards noted that emergency personnel were checking on the two staffers.

Lynch said “I am very pleased with the serious manner in which the situation was handled for the protection of our children, members and guests.”

The LJCC campus had been the target of four phoned-in bomb threats earlier this year. An 18-year-old in Israel was arrested and accused of making those calls and hundreds of others around the country.

Edwards recalled the earlier threats and said “we take every call seriously.”